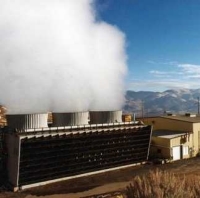 Washington, D.C. United States [RenewableEnergyWorld.com] The presidential candidates are stumping hard. And while energy and environmental issues are getting frequent mentions, both the Republican and Democratic leaders are neglecting one area: geothermal energy.

It now makes up just a sliver of the electricity generation pie. But experts at the Massachusetts Institute of Technology say that enhanced geothermal systems (EGS) could have far wider applications and be especially useful in times of high energy prices and carbon constraints. Not only are the systems much cleaner than fossil fuels but they also provide a continuous flow of energy — all at a competitive prices.

“Geothermal energy could play an important role in our national energy picture as a non-carbon-based energy source,” says Nafi Toksoz, professor of geophysics at MIT. “It’s a very large resource and has the potential to be a significant contributor to the energy needs of this country.” Geothermal now provides less than 1 percent of the world’s power, he says, although could supply as much as 20 percent in the coming decades.

To get there, the MIT panel says that the tools to perfect deep drilling and water flow through the underground navigation system are needed. MIT Engineering Professor Jeff Tester and panel member David Blackwell, professor of geophysics at Southern Methodist University in Texas, also point out that geothermal resources are available nationwide. But the highest-grade sites are in western states where hot rocks are closer to the surface, requiring less drilling and thereby reducing exploration costs.

The EGS study says that several wells must be drilled to reach those hot rocks. Once there, those wells must then be linked with natural or induced fractures in the rock to allow the water to flow through. Water is pumped via the wells through these fractures in the hot rock and up to the surface to run electric generators at the surface. Unlike conventional fossil-fuel power plants that burn coal, natural gas or oil, no fuel would be required. To that end, the panel says that the environmental effects of geothermal power are “markedly lower” than either fossil fuels or nuclear power. And unlike wind and solar systems, a geothermal plant works night and day.

“This environmental advantage is due to low emissions and the small overall footprint of the entire geothermal system, which results because energy capture and extraction is contained entirely underground, and the surface equipment needed for conversion to electricity is relatively compact,” says Tester.

It’s not an easy objective. It costs a lot of money to drill wells in large part because explorers need to drill deep into the earth, often 5,000 feet or more below the earth’s surface.

MIT’s report also notes that meeting water requirements for geothermal plants may be an issue, particularly in arid regions. Further, the water that is used to create electricity much be kept separate from drinking water supplies to prevent contamination.  Additionally, the potential for seismic risk from fluid injection needs to be carefully monitored. The cumulative effect of all those obstacles has led skeptics to conclude that geothermal energy will remain a nominal power source.

Others, however, are more upbeat. Some of the same technologies now being used by the oil and gas industries to minimize their environmental footprints can be applied to drilling wells to create geothermal energy. In a carbon constrained world, companies would have the incentive to make such investments.

“The possibility of drilling into these rocks, fracturing them and pumping water in to produce steam has already been shown to be feasible,” says MIT’s Toksoz. He emphasizes that the same concept could be replicated throughout the nation but that advanced tools are necessary so that it could all be accomplished in commercial-scale.

Ground source heat pumps are another form of geothermal energy that can be tapped into by households and businesses to meet their heating and cooling needs.  In this application, pipes are buried in the ground at a depth where the temperature of the earth remains constant, usually several meters.

Because the earth’s temperature is always moderate at 50-60 degrees Fahrenheit, these types of heating and cooling systems are less stressed than conventional ones. That conserves a lot of energy when compared to units that use centralized air and heat. Monthly savings could total somewhere between 25 percent and 50 percent of current utility bills. And that’s why the federal government has a goal of getting 7 million homes and businesses to use geothermal heat pumps by 2010.

In New Mexico, schools are being retrofitted with geothermal heat pumps that developers say will save as much as 50 percent on energy bills. And the Little Rock, Ark. region is installing geothermal units at several fire stations and one police outpost.  Several schools in Iowa have geothermal heating and cooling systems, as well as at least one in Wisconsin.

Of course, these are pricey too. The U.S. Department of Energy pegs an average home installation at about US $7,500. While that is more than a conventional heating and cooling system, the DOE claims that depending on factors such as climate, soil conditions, system features and financing and incentives, homeowners can expect to recoup their investment in anywhere between two and ten years.

Now that energy topics are taking center stage in the presidential debate, it would be remiss of the candidates not to discuss the possibilities of geothermal energy. Like any burgeoning energy form, it must endure several impediments while also attracting a sizable investment to allow it to reach a critical mass. With several projects underway, the process has begun.