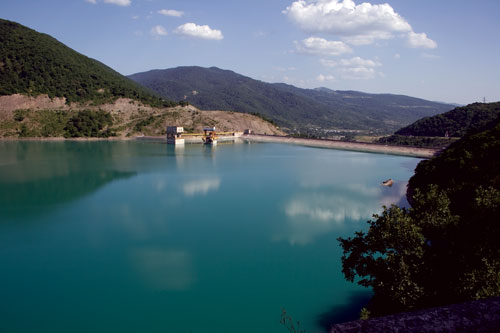 The country of Georgia has untapped hydroelectric potential of about 20 TWh annually and energy-hungry neighbors in Turkey, Russia and Eastern Europe. With a recent influx of investments, Georgia is expanding its hydro potential and generating revenue at the same time.

Liza Tavdumadze is head of the investment projects department of the Ministry of Energy and Natural Resources of Georgia.

Located at the crossroads of Western Asia and Eastern Europe — between the Black Sea, Russia, Armenia, Azerbaijan and Turkey — Georgia has a very strategic location and serves as a bridge between Europe and Asia. The country offers direct access to European, Commonwealth of Independent States and Gulf Cooperation Council member countries. Georgia’s five major oil and gas pipelines, Black Sea ports, well-developed railway systems, and airports play an increasingly important role in linking the East and West.

It can be boldly stated that Georgia is a “hydro powered” country. On average, 85% of the country’s total energy consumption is supplied by domestic hydropower plants. Despite this, Georgia has huge untapped hydropower potential remaining. The country’s natural wealth is comprised principally of water and water resources, and its hydroelectric potential per capita ranks among the world’s greatest, with at least 300 rivers capable of hydropower potential of about 20 TWh annually.

In recent years, Georgia has become a stable power-producing country through rehabilitation of existing hydroelectric plants and added capacity. From 2004 to 2011, electricity generation in the country rose from 6.9 TWh to 10.1 TWh (see Table 1). 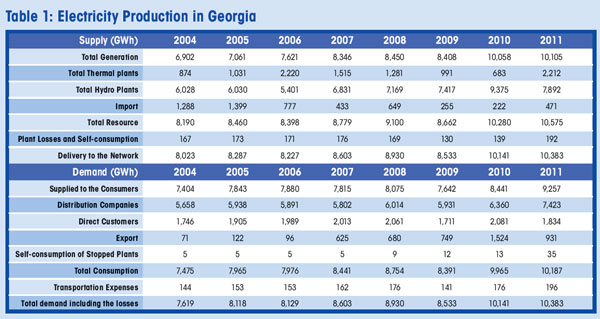 As Georgia is a developing country, there is significant potential for domestic consumption to increase. From 2007 to 2011, the average growth rate in year-on-year electricity demand was more than 5%. Such growth had an effect on wholesale electricity prices, which rose by 6.5% annually.1

To meet growing demand and keep electricity prices comparably low, the country needs to add new capacity. The government has developed a state energy policy so that energy sector development is planned to be one step ahead of the country’s economy. This kind of policy opens doors for electricity exports as well because electricity generation exeeds demand. According to regulations, there are no quotas set nor any permits or licenses required to export electricity from Georgia.

Georgia has been a net exporter of electricity since 2007, and since 2010 Georgia has exported energy to all its neighboring countries (see Table 2).

Private equity-driven investments are pushing this export market to expand even further. The rapidly growing Turkish economy is expected to require its domestic energy sector to double production capacity by 2020, and many other countries in the region are also seeing rapid consumption growth. This gives Georgia an excellent opportunity to use its excess supply of electricity to offset expanding demand in Turkey, Russia, Azerbaijan, Armenia and possibly Iraq. Georgian river flows are at their highest in the summer. Accordingly, the hydro plants generate excessive energy and significantly override domestic consumption. This energy needs to be exported. Fortunately, peak demand in neighboring countries occurs in the summer as well, making electricity exports more compelling.

Currently, Turkey is the most attractive market for Georgian electricity exports. According to the Turkish Electricity Transmission Corp., over the past three decades Turkish demand for electricity has grown at an average rate of 7.6% annually. By 2013, Turkey is expected to be a net importer of electricity, and the large wholesale price differential between privately generated electricity in the two countries — the average wholesale tariff is US$0.085/kWh in Turkey as compared with US$0.043/kWh in Georgia — results in an excellent export opportunity for Georgian producers.

Georgia is finalizing the construction of a new 500/400 kV high-voltage transmission line with converter station at the border for asynchronous operations of power systems of the two countries. The project has been funded by the Georgian government, with financing support from the European Bank for Reconstruction and Development, KfW Bankengruppe and the European Investment Bank. This transmission line is expected to be completed and go into operation in 2013. As a result, interconnection capacity with Turkey will increase 10 times, reaching 1,000 MW. Even when the new line is fully loaded, Georgian electricity exports will account for only 2% to 4% of Turkey’s total electricity consumption.

Georgia also is eying Europe as a potential electricity export destination. Turkey is expected to become a member of the European Network of Transmission System Operators for Electricity (ENTSO-E) in 2013. This will enable Georgian electricity traders to directly access Eastern European customers as well.

The government of Georgia — in parallel with a number of well-known and local engineering and consulting companies, such as ECON Poyry, Fitchner GmbH, Black and Veatch, Stucky, and Mott McDonald — has identified up to 135 potential hydropower projects. The generating capacities of these identified investments range from a few kilowatts up to 700 MW.

Sixty two projects have already been contracted with private investors and are in different stages of development. Out of these 62, construction of 17 projects has already been started, and others are in the process of obtaining a construction license. Detailed lists are available of ongoing (contracted) projects.2

Total estimated investments in hydropower exceed US$4 billion. At this stage, more than 2,000 people are employed on all ongoing construction work. Up to 10,000 jobs will be created on hydropower plant construction and, after commencement of operations, about 2,000 working places will be available for power plant technical management and administration.

Investments in Georgia’s hydroelectric sector have the potential to be quite lucrative. Hydropower projects in the country have attracted millions of dollars in investments from foreign and local businesses. One of the largest planned investments is the 702 MW Khudoni project on the Enguri River in Zemo Svaneti Region, a potential $776 million investment. The project is being developed by Indian company Transelectrica ltd. Construction work is planned to start in 2013. In parallel, the company is in the process of negotiations with financing organizations to attract additional capital in this project.

Khudoni is to feature a 170 meter-tall arch dam and an underground powerhouse. Construction was started on the project in 1979 but halted in 1989 upon the collapse of the Soviet Union. Although a river diversion tunnel, bridge structures, roads and a railroad track were built, their condition is reported to be highly deteriorated.

In July 2007, Georgia’s Ministry of Energy named a consortium of JV Colenco and Stucky of Switzerland to perform a feasibility study of the proposed project. That same month, the ministry named BRL Ingenierie/ARS Progetti of France and Italy to perform “safeguard” studies of the project, including environmental, social and cultural impact analyses and impact management plans.

Indian investors were very interested in Khudoni project development. After comprehensive negotiations, the Ministry of Energy signed a memorandum of understanding for construction, operation and ownership of the Khudoni project with Indian company Continental Energy Ltd.

Once on line, currently scheduled for April 2017, Khudoni will be the second largest hydropower plant in the country, behind 1,300 MW Enguri Dam.

Another significant project is the Turkish Anadolu Industry Holding’s $125 million investment in the 87 MW Paravani hydropower plant on the Paravani River in Samckhe-Javakheti Region, which is being developed by Georgia-Urban Energy and is expected to go on line in 2014. Total cost of this project is anticipated to be about $160 million. Another Turkish investor, the Adjar Energy Co., hopes to spend an estimated $200 million on three hydro plants: 42 MW Khelvachauri 1, 35 MW Khelvachauri 2 and 35 MW Kirnati. And the Turkish Optimum Energy Co. is investing about $70 million in two new hydropower plants, 11 MW Arakali and 15 MW Abuli. In addition, Dariali Energy, a USA-Georgia joint venture, intends to invest $135 million in the 50 MW Dariali plant on the Tergi River in the Mtskheta-Mtianeti Region, as well as an additional $65 million in the 28 MW Mtkvari plant on the Mtkvari River in the Samckhe-Javakheti Region. Both plants are scheduled to be completed by 2015.

Norwegian Clean Energy Invest, through its Georgian subsidiary, is developing a large cascade project on the Adjaristskali River in the Adjara Region with a possible installed capacity of 400 MW. The cascade is comprised of four plants — 175 MW Shuakhevi, 150 MW Koromkheti, 65 MW Khertvisi and 10 MW Skhalta — and has a budget of about $750 million.

On average, 10% to 15% of Georgia’s annual energy consumption is supplied by importing electricity and natural gas for thermal power generation. State energy policy is to completely replace electricity imports and thermal generation with hydropower resources. In total, about 2,500 MW of new hydroelectric plants are expected to be developed in Georgia before 2020, which has the potential to cover the growing domestic and external demand, and more hydro could make the Georgian market more self-reliant.

In addition, the government of the USA is promoting investments in Georgia by supporting construction of run-of river, derivation-type hydropower plants. Because these plants do not require reservoirs and involve no flooding and thus are environmentally friendly, this type of plan is even more attractive for investors than typical conventional hydro plants. In Georgia, 40 new sites for run-of river hydro plants providing additional total capacity of as much as 500 MW have been identified and offered to investors by the United States Agency for International Development’s Hydropower Investment Promotion Project.

Georgian state-owned Green Energy Development Fund (GEDF) is also working to develop run-of-river hydropower plants. The fund identifies and performs the analysis of potential greenfield hydropower projects and facilitates project investment promotion. GEDF is funded by the state budget. Using its own resources, the fund identifies the attractive project and begins construction. At the same time, GEDF contacts potential investors and offers the project. Investors can invest in the energy project at any stage and buy all or part of the project company shares.

In parallel with promoting the construction and development of new hydropower plants, the Georgian energy sector is focused to advance trading rules and regulations based on EU standards and best international practices. By enabling new Georgian hydropower plants to trade clean energy across an international border into competitive power markets, this would allow Georgia to become a major clean energy supplier in the region and an attractive destination for private investments.