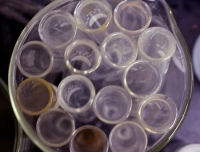 The federal government has stepped up its efforts both financially and in the lab in an effort to boost American biofuel production.

A team of researchers at the Department of Energy’s BioEnergy Science Center has pinpointed the single gene that controls ethanol production capacity in a microorganism. Researchers believe the discovery could be the missing link in developing biomass crops that produce higher concentrations of ethanol at lower costs.

Meanwhile, the departments of energy and agriculture announced Thursday they would spend $12.2 million on 10 research projects across the country.

According to the DOE, the discovery of the gene controlling ethanol production in a microorganism known as “Clostridium thermocellum” will mean that scientists can now experiment with genetically altering biomass plants to produce more ethanol. Current methods to make ethanol from a type of biomass found in switchgrass and agricultural waste require the addition of expensive enzymes to break down the plant’s barriers that guard energy-rich sugars. Scientists, including those at the BioEnergy Science Center, have been working to develop a more streamlined approach in which tailor-made microorganisms produce their own enzymes that unlock the plant’s sugars and ferment them into ethanol in a single step. Identifying this gene is seen as a key step toward making the first tailor-made microorganism that produces more ethanol.

The BioEnergy Science Center is led by Oak Ridge National Laboratory and is one of three DOE Bioenergy Research Centers established by the DOE’s Office of Science in 2007. The centers support multidisciplinary, multi-institutional research teams pursuing the fundamental scientific breakthroughs needed to make production of cellulosic biofuels, or biofuels from nonfood plant fiber, cost-effective on a national scale.

The team’s results were published in the Proceedings of the National Academy of Sciences. The invention is available for licensing.

Overall, the USDA and DOE projects are designed to improve special crops to be grown for biofuels — including selected trees and grasses — by increasing their yield, quality and ability to adapt to extreme environments. Researchers will rely on the most advanced techniques of modern genomics to develop breeding and other strategies to improve the crops. The research will be conducted on switchgrass, poplar, Miscanthus and Brachypodium, among other plants.

The potential benefits of this research range from decreasing oil imports to increasing options for American farmers. Because these crops will be optimized to tolerate conditions such as drought and poor soils, they can be grown on marginal lands unsuitable for food crops, thereby avoiding competition with food production.  Farmers will have the option to grow bioenergy crops in addition to other existing crop choices.

This is the sixth year of the joint USDA and DOE funding program. Initial funding will support research projects for up to three years.