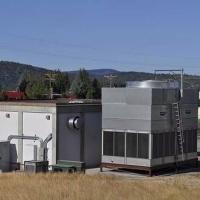 Oregon, United States [RenewableEnergyWorld.com] In a remote area on the California–Oregon border, and without much fanfare, the community of Klamath Falls is creating a virtual laboratory of economic and environmental innovation using one of the area’s less-obvious natural resources: the abundant hot geothermal water of the region’s volcanic past.

With over 100 participants from all over the world, the Geothermal Energy Association’s (GEA) two-day Geothermal Energy Small Power and Direct Use Workshop that took place last month at the campus of the Oregon Institute of Technology heralded a growing recognition that geothermal resources are available for a lot more than utility-scale electricity production.

Direct use, as the name implies, involves using the heat in geothermal water directly (without a heat pump or power plant) for such things as heating of buildings, industrial processes, greenhouses, aquaculture (growing of fish), and resorts. Direct use projects generally use resource temperatures between 38°C (100°F) to 149°C (300°F). Current U.S. installed capacity of direct use systems totals 470 MW or enough to heat 40,000 average-sized houses.

Klamath Falls, Oregon, is located on a Known Geothermal Resource Area (KGRA) and has been used by residents primarily for space heating since the turn of the century. At present, there are over 550 geothermal wells serving a wide variety of uses. This utilization includes the heating of homes, schools, businesses, swimming pools and snow melt systems for sidewalks and a section of highway pavement. Most of the eastern portion of the city is heated by geothermal energy.

With opening welcomes from Klamath Falls Mayor Todd Kellstrom, MaryAnn Zemke of OIT, John Lund, the Director of OIT’s Geo-Heat Center and Karl Gawell of GEA, the workshop featured speakers highlighting the many uses of geothermal resources.  The next day, many workshop participants toured sites featured at the workshop.

OIT was picked as the site for GEA’s first event of this kind for good reason. When it was built, the campus location was originally chosen for the region’s geothermal energy potential and has been heated by the direct use of geothermal energy since 1964. Three geothermal wells supply all heating needs of the 11-building campus.

A few days before the workshop kicked off, a new 280-kW (gross) Pratt & Whitney “Pure-Cycle” geothermal power system began operations on the OIT campus.  As one of the main sponsors of the workshop, Pratt & Whitney Sales Manager Michael Ronzello explained the installation and use of this unit, which will provide approximately 20% of the electricity demand on campus and will save the school about $100,000 annually. The PureCycle system taps geothermal water supplied from existing wells now used to heat the campus.

The addition of the PureCycle geothermal power system will move the campus closer to becoming a “zero net-energy” user and is the first step in OIT’s plan to develop a larger-scale (1.0 MWe) binary power plant. “We’ll be the first campus in the world to be 100% powered from a geothermal resource on its campus,” said John Lund. The school also offers a degree in renewable energy engineering and will use the geothermal power plant as a teaching tool and hands-on laboratory for OIT students. “This is an important addition to our campus academic programs that will better prepare our students to perform in the real world,” Lund said.

The City of Klamath Falls has an extended Geothermal Heating District, in operation for over 25 years, which was a natural extension of geothermal use on campus. Construction funds were provided by the U.S. Department of Energy, the state of Oregon and the city of Klamath Falls.  Currently, the system is approaching the original 1977 design capacity, and serves the city’s wastewater treatment plant, 24 buildings totaling about 400,000 square feet, 150,000 square feet of greenhouses and approximately 105,000 square feet of sidewalk, road and bridge snowmelt systems. (Image: OIT’s Toni Boyd gives a demonstration at the OIT Geo-heat center.)

Other communities were also highlighted at the workshop. For Canby, CA, about 75 miles south of Klamath Falls, installing a geothermal heating district system provided the town a much needed economic boost. Dale Merrick illustrated how geothermal projects enhance town pride and well-being as much as the bottom line for heating businesses and homes. Other examples were Chena Hot Springs in Alaska; Mammoth Lakes, CA; the first oil-field geothermal recovery project at the Rocky Mountain Oilfield Test Center in Wyoming; and the resurgence of interest in Texas.  (The author wishes to thank Bernie Karl, Lyle Johnson, Dave Harvey and Janet Abbott for their educational presentations.)

Participants closed out the workshop with a reception at the Creamery Brew Pub and Grill, the only brewery in the world that uses geothermal energy in their brewing process and to heat their building.

Private-sector Use of Geothermal

The second-day tour highlighted areas in which the private sector has embraced the use of geothermal resources in the Klamath Falls region. A massive tree seedling greenhouse business is operated by IFA Nurseries, the “Gone Fishing” operation of Ron Barnes and Liskey Farms.

For sheer variety, the Liskey Farms operation became the centerpiece of the workshop tour.  The geothermal resource on the Liskey property was once considered a nuisance to Jack Liskey, the ranch owner. It has been used for house heating, stock watering and crop irrigation on the 300-acre ranch. It has also been used for cooking cull potatoes for cattle feed and for frost protection of crops. Currently, it is still used for space heating, equipment cleaning and softening hay for feeding calves.

There are six geothermal wells on the ranch, which heat an array of greenhouse operations by finned tube pipes below each bench with a metal shield placed over them to better distribute the heat. The greenhouse effluent water is used to heat 37 shallow tropical ponds adjacent to the greenhouses. The outflow from the ponds is then cooled in a large storage pond and finally used for stock watering.

A series of greenhouses near the entrance road are used for biodiesel production, for raising organic vegetables and for a very unique “biopest” control operation. The biodiesel facility, run by Rogue BioFuels is heated by a radiant floor system and geothermal energy is also used in the biodiesel fuel process.

The tour day ended with a walk around “Gone Fishing” Farms which uses the waste water from the Lisky greenhouses to grow tropic fish for aquariums and tilapia for the food market. Geothermal water quickly mixes with the cold pond water to provide 80°F (27°C), which is ideal for the fish. The owner raises more than 100 varieties of fish and sells to markets in the San Francisco Bay Area – trucking about a 1,000 fish each week.

For GEA and the workshop participants drawn from a worldwide audience, the two-day study in innovation left all asking what other communities and areas have geothermal resources that can be tapped, reused and shared to offer a similar economic benefits in communities both large and small.

The workshop gave participants a roadmap of the financial incentives and regulatory options to institute direct use and small power projects.

For more information on the event, or to obtain a copy of GEA’s August 2009 Report on “Small Power and Direct Use Incentives,” please contact GEA.

John McCaull is the Western States Representative for the Geothermal Energy Association.