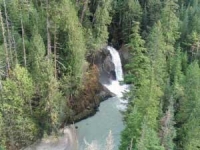 Vancouver, British Columbia [RenewableEnergyAccess.com] GE Energy Financial Services, a unit of General Electric, will make its first equity investment in Canada and diversify its renewable energy portfolio by investing in the construction of a 196-megawatt run-of-river hydroelectric project in British Columbia, Canada, being developed by Plutonic Power Corporation.

The energy giant, through a Canadian affiliate, has agreed—subject to closing conditions—to invest up to CDN $112 million to acquire a 49 percent equity and 60 percent economic interest in Plutonic’s East Toba River and Montrose Creek project, 118 miles northwest of Vancouver at the headwaters of the Toba Inlet.

The project includes a 90-mile long transmission line for interconnection to the power grid. In addition to its equity commitment, GE Energy Financial Services is co-leading, with Manulife Financial, a CDN $466 million senior secured debt offering to finance the project.

The transaction, plans for which were first announced last August, is expected to close next month, with project construction scheduled to start this summer.

Unlike traditional hydroelectric facilities, run-of-river projects do not require damming and storage of water. Instead, some of the waterflow is diverted from the river and sent into a pipe called a penstock that feeds the water downhill to a generating station. The water leaves the generating station and is returned to the river.

The project, which will produce electrical energy sufficient to power an estimated 75,000 homes annually, helps the province of British Columbia ensure that clean or renewable electricity generation continues to account for at least 90 percent of total generation.

Crown-owned British Columbia Hydro and Power Authority (BC Hydro), serving more than 1.6 million customers in an area containing more than 94 percent of the province’s population, has committed to purchase the project’s output for 35 years.

In addition to investing in the hydroelectric facility, GE will make a three and a-half year CDN $30 million credit facility available to Plutonic to increase the capacity of a 230-kilovolt transmission line to be built as part of the project. This investment would pave the way for Plutonic to be able to self-finance the construction of three additional Toba Valley projects with generation capacity of 116 megawatts.

In return for this credit facility, Plutonic will grant GE the right to negotiate to finance up to an additional 200 megawatts of other hydroelectric power projects in BC, and issue to GE 650,000 two-year common share purchase warrants with an exercise price to be determined upon closing.

“Since first transacting with GE Energy Financial Services in August of 2006, we have been able to solidify a financing plan for over 500 megawatts of our generation capacity. This financial security allows Plutonic to focus on permitting and development of its growth pipeline, especially as concerns our social license to operate,” stated Donald McInnes, founder, president and CEO of Plutonic Power.

Final significant conditions to be concluded prior to the commencement of construction include signing a definitive shareholders’ agreement, closing the debt facility, executing an interconnection agreement with British Columbia Transmission Corporation and concluding a fixed-price construction agreement with Peter Kiewit Sons’, Inc.-all of which are expected to close in June. The project is expected to become operational in 2010.