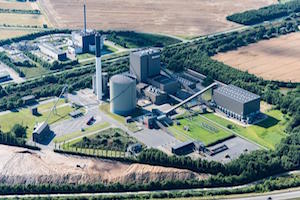 A ground-breaking ceremony was held today in Denmark to mark the start of a biomass plant conversion project that will make the facility more fuel efficient.

Orsted said that it joined Danish Minister of Finance Kristian Jensen and a group of Danish utilities to celebrate the launch of construction for the project, which the utility added will provide the Herning Power Station with a plant that will reduce consumption of wood chips and pellets by about 20 percent.

“It’s really good news for our climate that we join forces with our heat customers to make Herning Power Station even more efficient. It’s already a green power station running on sustainable biomass, and now we’ll be able to reduce the fuel consumption significantly, thus ensuring that the power station is a competitive alternative to fossil fuels,” Thomas Dalsgaard, executive vice president and CEO of Bioenergy & Thermal Power at Orsted, said in a statement.

The combined heat and power station was originally commissioned in the 1980s as a coal-powered facility, and it was converted to use natural gas in 2002 and later to run completely on biomass. According to Orsted, the facility has a capacity of 88 MW of power and 171 MJ/s of district heating. The latest update will add a flue gas condensation plant that Orsted said will take advantage of residual heat in the flue and make the plant more efficient.

The new plant is expected to be completed in 2019.