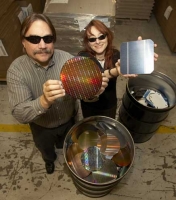 Through this new reclamation process, the company says it is now able to remove more efficiently, the intellectual property from the wafer surface, making these wafers available either for reuse in internal manufacturing calibration as “monitor wafers” or for sale to the solar cell industry, which must meet a growing demand for the same silicon material to produce photovoltaic cells for solar panels.

“One of the challenges facing the solar industry is a severe shortage of silicon, which threatens to stall its rapid growth,” said Charles Bai, chief financial officer of ReneSola, one of China’s fastest growing solar energy companies. “This is why we have turned to reclaimed silicon materials sourced primarily from the semiconductor industry to supply the raw material our company needs to manufacture solar panels.”

Because the wafers contain intellectual property, without this new process, most cannot be sent to outside vendors to reclaim and are crushed and sent to landfills, or melted down and resold.

According to the Semiconductor Industry Association, worldwide 250,000 wafers are started per day across the industry. IBM estimates, based on its own manufacturing data, that up to 3.3% of these started wafers are scrapped. In the course of the year, this could amount to somewhere in the vicinity of three million discarded wafers.

The new wafer reclamation process produces monitor wafers from scrap product wafers—which IBM says generate an overall energy savings of up to 90% because repurposing scrap means that IBM no longer has to procure the usual volume of net new wafers to meet manufacturing needs.

When monitors wafers reach end of life they are sold to the solar industry. Depending on how a specific solar cell manufacturer chooses to process a batch of reclaimed wafers—IBM says it could save between 30 – 90% of the energy that it would have needed if it has used a new silicon material source.

The program resulted in reduced spending on monitor wafers and increased efficiency in IBM’s wafer reclaim program. For the IBM Burlington site, the annual savings in 2006 were more than half-a-million dollars. The projected ongoing annual savings for 2007 is nearly $1.5 million and the one-time savings for reclaiming stockpiled wafers is estimated to be more than $1.5 million.

IBM intends to provide details of the new process to the broader semiconductor manufacturing industry. It is currently in use the Burlington, Vermont, facility and in the process of being implemented at IBM’s East Fishkill, New York, semiconductor fabrication plant.