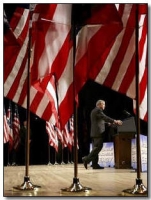 Special Commentary [RenewableEnergyAccess.com] Free market politics in energy? Nope, a “Pork Barrel Extravaganza” would be a better description. The House of Representatives just passed the Energy Bill, HR 6, on April 22nd by a vote of 249 – 183, and even the President of the United States was quoted earlier that the bill would do little to solve energy price increases.

The real “meat” of HR 6 is in the $8.09 billion of energy tax provisions, and according to the April 12th Congressional Budget Office (CBO) Tax analysis, the bill is weighted towards “business as usual.” The glimmer of hope, of course, is the $415 million of clean energy provisions; including, residential fuel cells for $6 million, residential solar for $18 million, and existing home energy efficiency improvements for $391 million. Please note that all these numbers calculated by CBO represents the “loss” to the US Treasury for ten years, from 2005 – 2015. So where did the other $7.675 billion go to? To the traditional energy industries, of course. The United States imported over $160 billion of oil and natural gas in 2004, and nothing in this Bill would change that. In fact, the tax provisions dump money into a set of petroleum and gas industries that have record profits. Nuclear energy received a $1.313 billion benefit for decommissioning costs. The National Academy of Sciences just released its findings that the nuclear storage of waste in “pools” was not the safest approach in the post-September 11th world, and press reports regarding cover-ups on the safety of the Yucca Mountain Nuclear Test Site are being aired frequently. Natural Gas and Petroleum received the greatest benefits with funding for natural gas gathering-pipelines receiving 7-year treatment and alternative minimum tax (AMT) relief, and distribution pipelines receiving 15 year tax treatment totaling $1.610 billion. Independent oil producers, which already receive AMT relief, now would receive a new depletion definition for $159 million, a small benefit by comparison. Another $1.662 billion was doled out to assorted fossil industry sectors such as diesel, marginal wells, and enhanced oil recovery. Don’t forget coal and the electric utility industry, which received a $1.529 billion, 15-year write off for treatment of transmission property. And add on $1.402 billion for qualified air pollution control facilities in post 1975 coal fired electric power generation plants. Don’t think the Senate will shy away from tilting their Energy Bill, but some believe it will do so in a more balanced way. Senate Energy and Natural Resources Committee Chairman Pete Domenici publicly stated he wants loan guarantees for next generation nuclear and coal plants – while talk of loan guarantees for advanced biomass or concentrated solar power facilities haven’t made it on the list. However, several Republicans and Democrats in the Senate are pushing for an extended Renewable Energy Production Tax Credit (PTC) for wind and biomass, and to expand the credit to include to solar, geothermal, and a broadened definition of biomass. Senator Lamar Alexander (R-TN) has said he plans to re-introduce his Bill to refine commercial and utility generation for solar and other renewables. Skeptics on renewable energy often use the excuse that renewables cost more – so why support them? It’s important to remember that the traditional energy industries are subsidized by billions of dollars each year in today’s tax code. There are oil depletion allowances, special treatment on coal royalties, overseas oil refinery credits, and intangible drilling costs – to name a few. Now, possibly $7.6 billion more of taxpayers’ money will be added to skew the market even further away from renewable energy and high value energy efficiency. The House version of the Energy Bill has no national interconnection standards, no expanded PTC for renewables, no Renewable Energy Portfolio Standard, no mandated expansion for federal procurement, and no mileage standards for automobiles. So, with the energy bill as it stands America will stay opiated on imported energy, with its rising costs and the uncertainty associated with access to and the price of oil and natural gas, and their effects on the environment. The scenario just reinforces the comment by columnist Jim Broder, who once wrote, “Washington is the steering wheel of the nation, not connected to anything”. By Scott Sklar, President of The Stella Group, Ltd., a strategic marketing and policy firm based in Washington, D.C. Sklar can be reached at solarsklar@aol.com or via www.thestellagroupltd.com