More
Home Baseload Bioenergy For a Green Future: An Overview of Biomass Energy in China

China has abundance of biomass energy resources, from agricultural (such as straw and forestry), residential and industrial wastes, energy crops and plantations, etc. Annually, there are nearly 300 million tons of crop straw wastes, 300 million tons of forestry waste are available for fuel production. Besides biogas and municipal solid waste (MSW), the total biomass resource with equivalent of around 500 million tons of coal can be potentially converted into fuel. 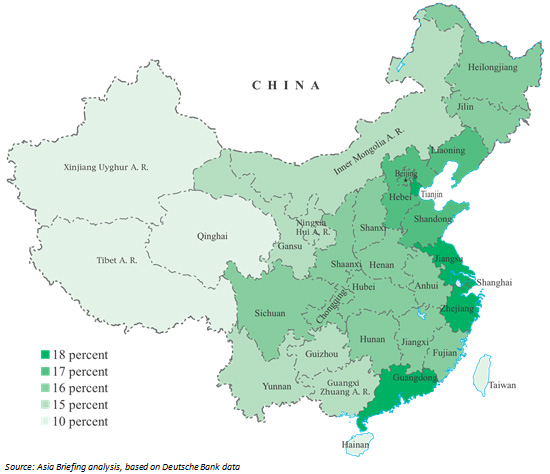 With increasing demand for energy and rising environmental concerns, the Chinese government issued series of laws and policies to ensure the realization of its target that by 2010 the percentage of renewable energy share will take 10 percent of the country’s total energy consumption and by 2020 it will be 15 percent. While the percentage of the biomass energy will be largely increased (shown in the diagram above).

In order to realize the energy target, the Chinese government issued Renewable Energy Law in 2005 to support the development of the renewable energy, including biomass energy. In 2006, the law came into force and functioned as a framework for renewable energy development strategy and meant to increase the energy supply domestically, optimizing energy structure and realizing the continuous development of economy and society. Following Renewable Energy Law of the People’s Republic of China, series of regulations and policy measures are issued to support the realization of the renewable targets, such as fiscal subsidies, tax policies, pricing schemes and green production rewarding scheme. 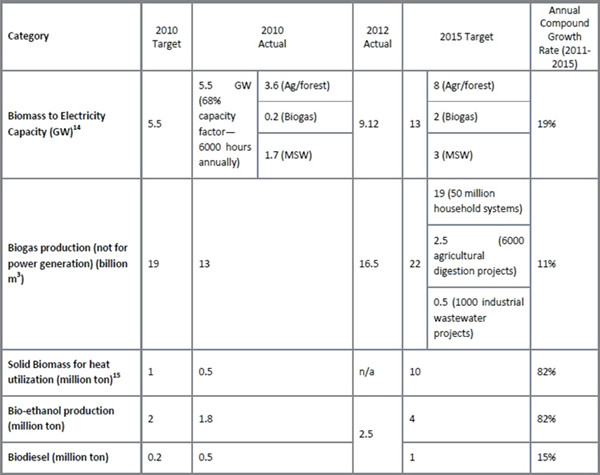 In the above diagram, the biomass energy target and actual utilization of various fuels are clearly shown. Even though any type of biomass fuel is important and contributes the realization of 2020 renewable goals, solid biomass fuel will be the focus of the article because of its significant importance in China and the time and space limitation of the article.

Solid biomass fuel refers to the solid fuel made from the biomass materials, which usually refers to biomass pellets, briquettes and pucks. In 2010, around 100 biomass pellet plants in the agricultural areas have been established to produce pellets and briquettes with the unit capacity of 10,000 tons per year and with the total annual capacity of 3 million tons.

Most natural biomass materials cannot be utilized large scale due to low density and high moisture. The solid biomass fuel production technology makes it possible to convert the natural plant residues into solid fuels which is generally known as pelletizing and briquetting.

Equipment Research
When it comes to industrial scales production, the total process involves a series of equipment, from the raw material preparation to the packaging of the solid biomass fuels, i.e. pellets and briquettes. Generally, the production line is consisted of the following main machines, hammer mill, dryer, conveyer, pelletizing or briquetting machine, cooler, and bagger, etc. However, the construction of the biomass pellet or briquette production line can be different according to the conditions of the raw materials and the individual situations. No matter how different they are, biomass pellet machines and briquette machines are necessary for a pellet line or a briquette line.

Conclusion
Even though solid biomass fuel is developing and have gained certain achievement so far, there are still problems and obstacles.
1. proper production standard and pricing system is in want.
2. related statistic system also needs to be improved.
3. the geography obstacles. The geographically scattered agricultural production cause troubles to feedstock supply chain, which may increasing biomass fuel production cost.