Since its inception nearly a decade ago, Essential Consulting Oregon, LLC (EC Oregon) has built up an impressive résumé when it comes to the planning and implementation of U.S. biogas projects. In that time period, the company has provided dozens of feasibility studies, performed GIS mapping in several states, and provided services for the development of four full-scale biogas plants.

Check out a photo slideshow of this project here.

The most recent of these biogas plants, the $16 million JC-Biomethane LLC project, had been in the company’s sights for more than five years. The new plant in Junction City, Oregon, which opened in mid-2013 is anaerobically digesting organic material to generate methane-rich biogas, which then fuels a generator for the production of electricity. This project carried particular importance for its founders, since they happen to live in the area. But beyond the personal connection to the region, there were other local factors that made the site an excellent location to demonstrate the potential for similar facilities across the country. 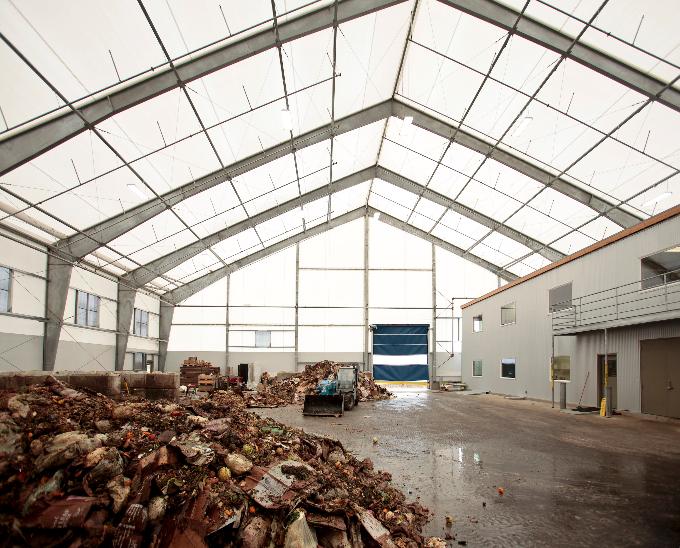 “The community here is very focused on sustainability, landfill diversion, renewable energy,” said Dean Foor, project engineer for EC Oregon and chief executive officer of JC-Biomethane. “Between federal grants, state tax credits and a $2 million contribution from the Energy Trust of Oregon, we had a good groundwork here for developing this type of project.”

“The field of waste management as a whole seemed reluctant to embrace the technology of processing food waste into biogas,” said Foor. “The technology needed a push to make it happen and show its potential.”

The biggest adjustment from the change in feedstock was to the design of the receiving building. Instead of handling clean organics, JC-Biomethane would need a separator to remove contaminants from the food waste. The company also wanted to account for odor control and greater storage capacity requirements. In short, the receiving building on site would need to be much larger.

At the recommendation of Evergreen Engineering, JC-Biomethane turned to Legacy Building Solutions to provide a tension fabric building to receive waste for the plant. In contrast to traditional tension fabric structures, Legacy buildings feature a rigid frame design that utilizes structural steel I-beams, which allows the manufacturer to customize to the exact length, width and height needed.

“Essentially we modeled up the dimensions we would need to accommodate trucks making deliveries and loaders operating inside of the building,” said Foor. “We also needed space to house different equipment arrangements and hold the amount of inbound material we anticipated. The height needed for truck tipping was another consideration.”

The end result supplied was a 120 x 160 foot structure with a polyethylene roof that peaks at a height of 47 feet. The building is outfitted with Rytec high-speed fabric doors for truck entry, and also includes a two-story office complex within the envelope of the larger structure.

“We have about 3,600 square feet of office space inside the building,” said Foor. “We did some retrofitting in that area of the structure late in the process as well. Our architect worked with Legacy on a modification to provide an exposure from our offices to the western view. The whole engineering phase with Legacy was excellent. They were very responsive to our ideas and turned things around very quickly. Even the installation was fast – the whole building was erected in about seven days.”

Legacy’s structural steel frame design allowed JC-Biomethane to mount equipment from the I-beams as well. The receiving building includes a special odor control system, a feature that isn’t legally required by federal or state regulations, but that Foor and others determined would be advantageous both for plant workers and neighboring businesses and residents.

The odor control system is comprised of two large hoods established over receiving areas where the food waste resides for extended periods of time. A vacuum over the area pulls in the atmospheric gases emitting from the waste and moves the contaminated air through ducting to an ozone system just outside the building. A series of 132 UV lamps create ozone, which reacts with any volatile odors and neutralizes them.

“We’re basically pooling multiple exchanges of air per hour through our building and using an ozone reaction to control odor,” said Foor. “It’s a unique application. This technology is used at biogas plants in Europe, but we don’t know of any other biogas plant in North America that has used ozone for odor treatment. We think that’s a first.”

Though the fabric building was chosen primarily for its customizability and overall efficiency for the application at hand, JC-Biomethane immediately started noticing additional environmental and cost benefits from the structure.

“The fabric roof allows a lot of natural light into the building, which is a big advantage on the operations floor, since it reduces our need for artificial lighting inside,” said Foor. “It provides significant sheltering from rain, wind and cold. Even though we didn’t have it insulated, it’s still noticeably more comfortable inside during the winter. We thought it might be hot to work in during the summer, but the structure actually provides more of a shading and cooling effect.”

The operation officially kicked off when JC-Biomethane began processing food waste in July 2013. The facility receives most of its post-consumer food waste from commercial sources in the Portland metropolitan area and throughout the Willamette Valley. Currently, trucks are bringing in about 1,500 tons of food waste per month, enough to produce 550 cubic meters of biogas an hour. 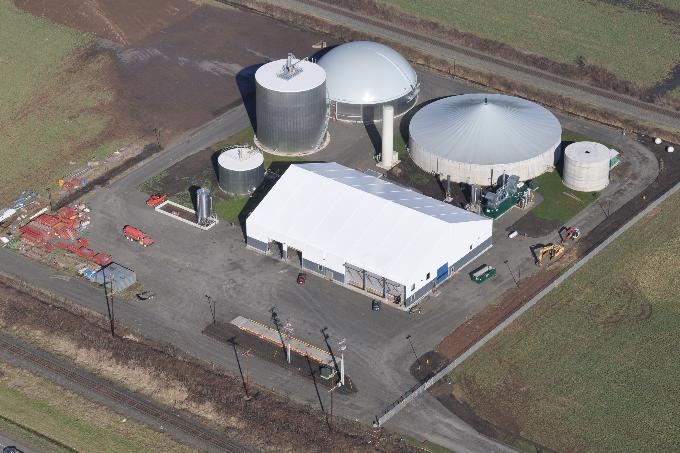 After a bioseparator breaks down organic substrate and removes hard contaminants, the cleaned substrate is pumped outside the receiving building into a homogenization tank, where it remains for several days. The material then is moved into an oxygen-free, continuously stirred tank reactor (CSTR), where heated waste anaerobically digests for 30 days. Here is where the bacteria convert the organic waste into biogas, which rises to the top of the tank.

The processed digestate material from the CSTR then gravity overflows to a post-digester tank, which collects the biogas in its inflatable gas holder. Biogas is then piped into a cleaning tower where bacteria remove gas contaminants. Remaining solids are converted to a sweet-smelling fiber compost byproduct, while odorless liquid digestate goes into a large holding tank to be sold as liquid fertilizer. Meanwhile, the biogas moves through underground pipes for water removal and final cleaning via activated carbon.

At this stage, the biogas is now ready to fuel the plant’s 16-cylinder, 2,000-horsepower MWM co-generation engine. Combustion of the gas in this combined heat and power unit turns a generator that converts mechanical energy into electricity. The engine has a 1.55-MW capacity, and is expected to produce 12,250 megawatt-hours of electricity on an annual basis, enough to power approximately half the homes in neighboring Junction City. The generator’s electricity is sold to Portland General Electric as part of a 20-year purchase agreement. JC-Biomethane began selling its electricity in October 2013, three months after the first loads of food waste entered its doors.

Doubling in Size and then Going After New Markets

According to Foor, JC-Biomethane already expects to double its food waste intake within six to nine months to 3,000 tons per month. This quantity would match the existing facility’s maximum capacity, and, as a result, there is already some consideration for expansion.

As far as the prospects for developing additional biogas plants, Foor acknowledges there are some challenges to replicating the JC-Biomethane model. “In our existing plant, it is all electrical production,” he said. “We secured our rates with the electric utility at a time when they were considerably better than they are today. The future of biogas plants is more likely hinged to us being able to sell energy into the vehicle fuel market. We can take our methane-rich biogas, clean it with carbon dioxide, and compress it so it’s a direct replacement for compressed natural gas. The vehicle fuel market is probably the most ideal use for this energy source anyway, so that’s where our attention is focused as we look at future facilities.”

Mike Crummy is a writer with The Promersberger Company in Fargo, N.D.