More
Home Baseload Floating US Biofuels: Should the Navy Support a New Industry? 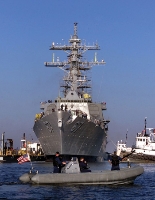 New Hampshire, USA — Touting the biofuels industry as the nation’s road to gain energy independence, the U.S. military wants to help move it forward. But government committees have proposed bills to block investment, arguing that it is too expensive and risky. Is the military the industry’s only hope for scale?

These days, it’s common to see a household with at least one car in its driveway. That same house is also likely to hold a personal computer. And the inhabitants of the home are just as likely to own a smart phone. But just one decade ago, most consumers could not have dreamed of owning these possessions. How did these innovations come to fruition? Each of these industries — automobile, computer, phone — went through periods of research and development, consolidation, and scale to become affordable and attractive to the major public market. The renewables industry is going through this same process — and the biofuels market is no exception.

But to become large-scale and cost-competitive with fossil fuel, the biofuels industry must continue to travel through a major research and development phase — a phase which also requires major investment. This is where the United States military — and controversy — enters the picture.

The U.S. military, the Navy in particular, has been a major supporter for the advancement of the biofuels industry. In fact, the Navy has pledged to get 50 per cent of its operational requirements for liquid fuels from alternative, non-fossil sources by 2020 — an ambitious goal for such a young biofuels industry. But the military is passionate about the initiative and has taken major strides to bring it to fruition, claiming that its major priority is to achieve energy independence.

“We’re pursuing alternative energy because our reliance on foreign oil is a very significant and well-recognized military vulnerability,” said Secretary of the Navy General Ray Mabus. “Energy security has got to be at the top of our agenda. The ability to use fuels other than oil and gas is absolutely critical. It will increase our flexibility, it will increase competition, and it will reduce the service’s vulnerability to rapid and unforeseen changes in the price of oil.”

In December 2011, the Navy purchased 450,000 U.S. gallons (1.7 million litres) of cooking oil- and algae-based drop-in biofuels for jets and vessels to be used by the Great Green Fleet at the biennial Rim of the Pacific (RIMPAC) demonstration, the world’s largest international maritime exercise, during summer 2012 off Hawaii. Dynamic Fuels produced the cooking oil-based fuel and Solazyme provided the algae-based product — each has been developed as a direct replacement for conventional fuels in engines without any modifications.

These biofuels were mixed in a 50/50 blend with traditional fuel, which cost around $15 per gallon. The Navy intends to achieve full-scale deployment of this type of blend by 2016.

But just one month before RIMPAC, the biofuels industry and the military encountered a possible roadblock. The House and Senate Armed Services Committee issued its report on next year’s Pentagon budget with Pentagon Budget Bill, HR 4310, which included a measure to exclude the development and purchase of biofuels that cost more than traditional fossil fuels.

The exclusions, however, do not eliminate all alternative fuels. The Committees recommend the Defense Department’s exemption from previous restrictions that prevent federal agencies from buying fuels that are more polluting than conventional fossil fuels. This would allow the military to use the Fischer-Tropsch method, which generates gas to liquid fuel from coal and natural gas — and also emits more carbon than burning refined crude oil.

With a shrinking defense budget, the committees believe that the military should focus on creating more vessels, supplies, and other necessities, rather than pushing money into a new, risky and expensive industry.

“I understand that alternative fuels may help our guys in the field, but wouldn’t you agree that the thing they’d be more concerned about is having more ships, more planes, more prepositioned stocks,” said Representative Randy Forbes during a hearing with Mabus. “Shouldn’t we refocus our priorities and make those things our priorities instead of advancing a biofuels market?”

The bill passed through the Senate Armed Services Committee with a 13-12 vote and the House with a 299-120 vote, creating a backlash throughout the government and biofuels industry.

Agriculture Secretary Tom Vilsack expressed his frustration with the decision during a conference call: “It’s beyond me why we wouldn’t help this industry that will create higher farm income, more jobs in rural America, reduce the costs for consumers, satisfy commercial airlines and make our military less reliant on a foreign supply of energy,” he said. “It is just astounding that people don’t understand that.”

Vilsack explained that the future of the biofuels industry is closely tied with the military, especially the Navy, and investments today will help bring down costs in the future — and costs have already come down. The Navy purchased biofuels in October 2010 at $42.40 per gallon, but paid $26.67 per gallon for the RIMPAC exercise, which then cost $15 per gallon when blended with traditional fuel.

Though the Committee’s goal is to reduce overall costs and purchase the current lowest-priced fuels, military officials argue that with each one dollar increase in the price of a barrel of oil, it costs the Navy about $30 million. In 2012, the Navy was presented with a nearly $2 billion bill for additional fuel costs, which was paid by moving funds from Afghanistan — officials say that this is not sustainable and can be detrimental to the military.

“If we do not do something to tap down these price spikes, there are only a couple places that we have money to get for additional fuel costs,” said Mabus. “One is operations, which means we steam less, we fly less, we train less. The other is to take platforms, ships or airplanes away. I don’t want to have to make that choice.”

A coalition of 13 aviation groups have also banded together to protest the Committee”s decision, claiming in a letter to the Senate that the bill would severely damage the advancement of the biofuels industry and hinder American energy independence.

“We believe the ongoing military and civil aviation efforts must be continued and we strongly advocate that you prioritise and fund investment in aviation biofuels in what we all acknowledge is a difficult fiscal environment,” explained the coalition.

“Ultimately, we are convinced that this is an investment that will pay off by saving taxpayers millions through achieving energy security and independence.” The coalition also argued that further investment in bioenergy will help reach their fuel efficiency and carbon emissions targets, which includes a lofty goal of a 50 percent reduction in carbon emissions by 2050 from 2005 figures.

The jobs and cost argument

The Department of Agriculture has teamed up with the military to further advance the biofuels industry, which officials claim could not only enhance energy independence, but could also create a robust, advanced jobs market and reduce consumer fuel prices.

Vilsack explained that with biofuels investment, the Navy is leading the way to create a bio-based economic opportunity in rural areas with manufacturing opportunities and new income sources with crops like algae, switchgrass and miscanthus. Farmers and other producers can enter this new economy without competing with food crops like corn.

“The biofuel industry in the U.S. currently employs around 400,000 people directly and indirectly, and once we reach the threshold of renewable fuels set forth in the renewable fuels standard that could actually increase to one million people,” said Vilsack. He also argues that military investment and biofuels growth, which create competition in the fuel industry, will help reduce fluctuations in prices and lower costs at the pump.

This point is echoed by Adam Monroe, president of Novozymes North America, which produces cellulosic ethanol with plants in Nebraska. He argues that a budding biofuels industry will not only benefit the military, but many private companies such as airlines, shipping and trucking.

“In the end, consumers will benefit with lower-priced goods and less-expensive fuel that is less bound to oil prices,” he said.

The military successfully launched the Great Green Fleet at RIMPAC in July 2012, using the advanced drop-in biofuels without issue. Mabus explained that the atmosphere at the demonstration was one of pride and hope for a biofuels future.

“It was absolutely worthwhile to show that biofuels can compete and can be used in every single thing that we do in the Navy,” said Mabus. “This shows that we can use biofuels and other alternative energies in an operational manner.”

Heather Zichal, Secretary of Energy, expressed the Obama Administration’s frustration with the Committee in a press call during the Great Green Fleet demonstration at RIMPAC. She explained that the Administration stands behind their “all of the above” energy strategy, which includes biofuels investment.

“We view the efforts of some in Congress to undermine the military’s ability to invest in alternative fuels as both disappointing and shortsighted,” Zichal said. “I believe that the successful demonstration by the Great Green Fleet [at RIMPAC] should help Congress better understand the tremendous opportunity we have with biofuels to help power our Navy.”

After the completion of RIMPAC in August, the Senate Committee on Appropriations approved a spending bill that allowed $70 million for Naval investment in biofuels. It also included $100 million for the Defense Production Act, which allocates money to increase production capacity of defense-related initiatives. The House version of the bill allowed $50 million in general funds for defense initiatives.

Both measures are set to move to the full Senate for consideration and reconciliation of changes with the House in the autumn of 2012, which is also when a full vote is expected.

Now that the Navy has proved that drop-in technology works, it plans to collaborate with the Departments of Energy and Agriculture to increase production and lower costs. The team is planning several pilot projects, accepting proposals and recruiting companies that are willing to work with nonfood feedstocks. Vilsack expects to choose participants by early autumn 2012.

Mabus also emphasized that the Navy will not buy large amounts of biofuels until they are cost-competitive, and this program will work to get them there.

The Department of Energy is also committed to the Renewable Fuels Standard and believes research and development in biofuels is a major factor in reaching that goal. This is why, Vichal explained, the government has taken many steps to develop technologies and accelerate new technology R&D in labs and at commercial scale.

“Barriers to bioenergy programs send negative signals to the public and market about the ability and technology in our industry,” said Monroe. “Putting up barriers prevents industries from experiencing these benefits — and the savings they generate.”