Corvallis, Ore. — The Northwest National Marine Renewable Energy Center, or NNMREC, which is based at Oregon State University, has chosen Newport, Ore., as the future site of the first utility-scale, grid-connected wave energy test site in the United States – the Pacific Marine Energy Center.

The Pacific Marine Energy Center, or PMEC, will test energy generation potential and the environmental impacts of wave energy devices, at an ocean site about five miles from shore. Subsea cables will transmit energy from the wave energy devices to the local power grid, and data to scientists and engineers at on-shore facilities. 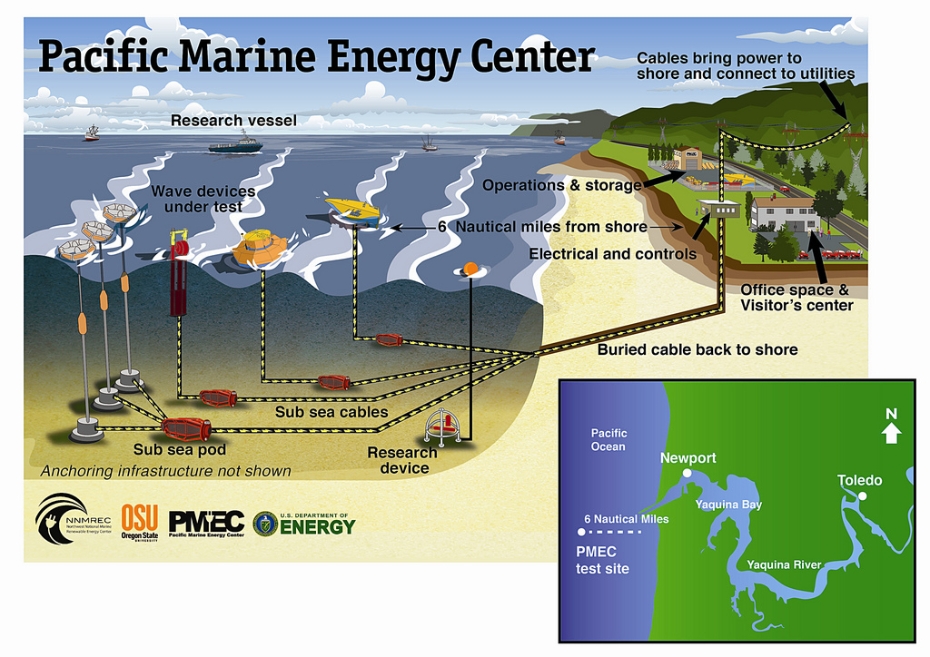 The first installment of funding for PMEC was received in September, 2012, consisting of $4 million from the U.S. Department of Energy, along with a non-federal cost match.

“PMEC represents a major step toward the development of energy from Oregon’s ocean waters,” said Jason Busch of the Oregon Wave Energy Trust. “I’m certain that Oregon will reap benefits from PMEC for many years to come, and the research and development performed at PMEC will help usher in this new form of reliable electricity from the sea.”

PMEC design and specific site characterization will begin soon, along with the permitting and regulatory process. NNMREC will continue to work with a variety of partners to develop additional funding sources. The exact ocean location for the PMEC site will be finalized in the next few months in a zone that has been selected in collaboration with ocean stakeholders — an area that will not impede shipping lanes and takes environmental impacts into consideration.

The Pacific Marine Energy Center will have four “test berths,” open spaces of water dedicated to testing individual devices or small arrays of devices, each of which will be connected to the community’s electrical grid. It will also collect data associated with environmental and human dimension impacts. Completion will take several years.

The development and operation of this facility will provide jobs and other economic development as it attracts researchers and device developers to the Oregon coast from around the world, officials said. While under development, the Ocean Sentinel, NNMREC’s mobile ocean test buoy platform operating out of Toledo, will continue its work testing energy devices at its ocean test site north of Yaquina Head.

Advances in wave power technology are also one example of the growing partnerships between OSU and private industry. The university just announced a major new initiative, the Oregon State University Advantage, which includes such programs as the OSU Venture Accelerator and the Industry Partnering Program. It’s expected to help create 20 new businesses within the next five years while enhancing student education and Oregon’s economic growth.

In an extensive site selection process, NNMREC worked with four coastal communities to consider both technical criteria and community resources.  The options were narrowed last fall to Reedsport and Newport, the two communities that best matched the needed criteria for PMEC. Site selection teams from those communities submitted proposals in December.

The selection was ultimately based on ocean site characteristics, marine and on-shore cable routes, port and industry capabilities, impacts to existing ocean users, permitting challenges, stakeholder participation in the proposal process, and support of the local fishing communities.

“Both communities were committed to finding a home for PMEC,” said Kaety Hildenbrand of Oregon Sea Grant, coordinator of the site team process. “They spoke to their own strengths and demonstrated their unique assets.”

Belinda Batten, director of NNMREC, said the communities were similar in their capacities and capabilities, and the final choice focused on making PMEC a global competitor among international test facilities. All coastal communities will benefit from the growth of this industry on the Oregon coast, she said.

The Oregon Wave Energy Trust has supported PMEC and helped create a wave energy development regulatory process that meshes the needs of ocean stakeholders and the state. The agency has also helped address key points in Gov. Kitzhaber’s 10-year energy plan, including how wave energy is integrated into Oregon’s power grid while maintaining high environmental standards.

NNMREC is a partnership between OSU and University of Washington, focused on wave and tidal energy respectively, and receives a substantial part of its funding from U.S. Department of Energy. NNMREC operates a non-grid connected wave energy testing facility in Newport north of Yaquina Head and supports intermediate scale device testing in Puget Sound and Lake Washington. PMEC will complete the wave energy device test facilities.