California did it again — it led the nation on a key environmental issue. In this case, FERC (the Federal Energy Regulation Commission) adopted key aspects of California’s new interconnection rules for small wholesale energy projects like solar and small hydro. The Fast Track process, which FERC largely adopted, is a dramatically cheaper and faster interconnection process for qualifying small projects, so this change represents a major improvement with nation-wide impacts.

FERC adopted a number of changes in the Small Generator Interconnection Procedures (SGIP), three of which I’ll focus on here: 1) utilities must provide a $300 Pre-Application Report to requesting parties, which includes important information for judging the cost and feasibility of interconnection of the site at issue; 2) raise the minimum size for Fast Track from 2 MW up to 5 MW; 3) change the 50 percent minimum load rule to 100 percent, which effectively doubles the size of projects that can pass Fast Track.

All of these changes were first adopted by California in its interconnection reform process for the state-jurisdictional Rule 21 procedure in 2011 and 2012. I was heavily involved, as co-lead, in this reform process in California on behalf of my client, the Clean Coalition. We wrote much of the language that was adopted in the requirements for the Pre-Application Report and also influenced many other features of these reforms in what became a lengthy settlement process.

The Clean Coalition was also active in the FERC reform process, and I and my client were very happy to see FERC adopt California’s new rules almost unchanged. Kudos  also goes to the Interstate Renewable Energy Council (IREC) and the Solar Energy Industries Association (SEIA) in these efforts.

So what do these changes mean? Let’s go through each of the three major changes one by one.

The new $300 report allows developers to obtain the following information if it is “readily available” to the relevant utility:

These combined data give the developer a pretty good idea of the feasibility and cost of interconnecting under Fast Track or other procedures because the costs of interconnecting under Fast Track are generally fixed. For example, in California, the interconnection request fee, which includes the Initial Review, is $800. Supplemental review is $2,500. These fees are far lower than the $50,000 plus $1,000 per megawatt study fee under the default cluster study process, for example.

Increase Fast Track Eligibility from 2 MW up to 5 MW

FERC increased Fast Track eligibility up to 5 MW, based on the proximity to substations and line size, as described in the following chart. This is also a major improvement, particularly when we consider the change discussed in the next section. The eligibility threshold changes adopted by FERC are in fact better than those adopted by California (which allows up to only 3 MW), so the reform process is an ongoing dance of reforms between the state and federal levels. It is likely that California will adopt the table below before too long. 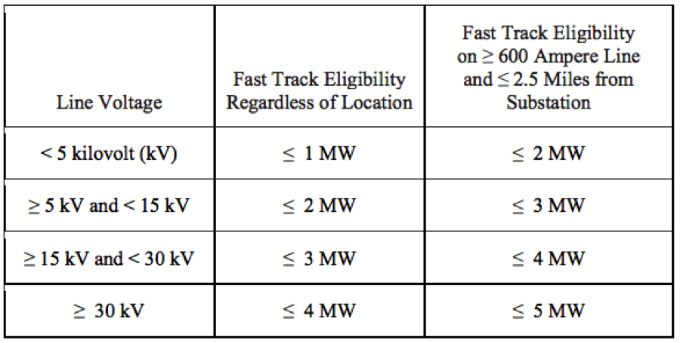 Under the former interconnection procedure, “Screen 2” was the bane of Fast Track applicants’ efforts to interconnect. Screen 2 required that a project not exceed 15 percent of the peak load on the line section at issue. A line section is the next size down from the circuit level, which itself is the next structure down from the substation level. The 15% rule was adopted as an approximation of 50 percent of the minimum load on the line section. “Load” refers to how much power is being drawn from customers.  The idea behind this rule was that, in order to avoid backflow above the line section at issue, utilities should play it safe and limit the interconnection size of projects that feed power back onto the grid to half of the minimum load.

In practice, this meant, for example, that a line section that saw only 1 MW of minimum load at, say 2:00 a.m., could interconnect 500 kW under Screen 2. California regulators, utilities and stakeholders agreed that this rule could be relaxed a bit. The California Public Utilities Commission (CPUC), which regulates utilities and state-jurisdictional interconnection procedures under Rule 21, agreed to adopt a 100 percent minimum load rule instead of the 50 percent rule, as part of the new supplemental review procedure.

In effect, this change allows projects at least twice as large as before to interconnect under Fast Track. Combined with the change to the 2 MW size threshold limitation, developers can now interconnect projects up to 5 MW in far more situations than previously possible. It wasn’t enough to simply allow up to 5 MW under the size threshold if a project would then be rejected for failing to meet the minimum load screen. And good for FERC for recognizing this.

The New Reforms in Action

I have had the pleasure of being the first to successfully navigate California’s new Rule 21 Fast Track process. My client, the Blue Sky Sustainable Ranch, in the Cuyama Valley in northern Santa Barbara County, obtained interconnection permission from PG&E for 1 MW and a 1.5 MW under the new Rule 21 Fast Track in late 2013. Without the reforms that the CPUC implemented in early 2012, we would not have been able to gain this permission because we would have exceeded the 15 percent maximum load rule even with much smaller projects.

The renewables revolution is ramping up in California and around the country and regulators like the CPUC and FERC will need to be vigilant in order to keep ahead of the curve on issues like interconnection.