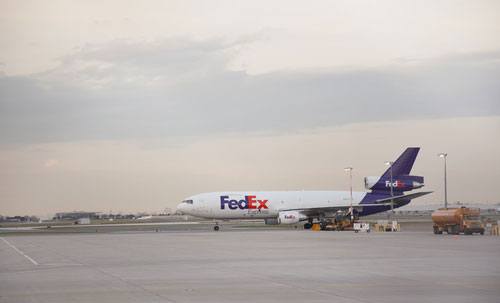 Beginning in 2017 anyone sending a package via FedEx may be sending it a little bit more sustainably. Today Red Rock Biofuels announced that it would produce approximately three million gallons of low-carbon, renewable jet fuel per year for FedEx Express, a subsidiary of FedEx Corp. The agreement runs through 2024, with first delivery expected in 2017. Between the two of them, Southwest Airlines and FedEx will be purchasing Red Rock’s total available volume of jet fuel.

Red Rock’s first refinery, funded in part by a $70 million Title III DPA grant from the U.S. Departments of Agriculture, Energy and Navy, is scheduled to break ground this fall in Lakeview, Ore. and will convert approximately 140,000 dry tons of woody biomass into 15 million gallons per year of renewable jet, diesel and naphtha fuels. In addition to reducing lifecycle carbon emissions, Red Rock’s production process could help reduce the risk of forest fires in the western U.S. by decreasing the amount of waste woody biomass in surrounding forests.

Terry Kulesa, co-founder and CEO of Red Rock said he’s thrilled with the deal. “With our total jet fuel capacity now sold to FedEx and Southwest Airlines, we are building a suite of powerful, global customers that continue to commit to the future of alternative fuels in a market where oil prices are low, providing true validation of our business model and mission.”

This announcement comes on the heels of Red Rock’s strategic partnership with Flagship Ventures, a venture capital and venture creation firm focused on healthcare and sustainability, for financial and strategic expertise on securing additional partnerships, funding and customers.