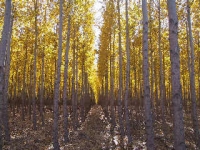 West Lafayette, Indiana [RenewableEnergyAccess.com] Purdue University researchers are using genetic tools to design trees that can readily and inexpensively yield the substances needed to produce ethanol. The Department of Energy’s (DOE) Office of Biological and Environmental Research is funding the $1.4 million, three-year study.

A hybrid poplar tree is the basis for the research that is part of the DOE’s goal to replace 30% of the fossil fuel used annually in the U.S. for transportation with biofuels by 2030. The Purdue faculty members Clint Chapple, Richard Meilan and Michael Ladisch are focused on a compound in cell walls called lignin that contributes to plants’ structural strength, but which hinders extraction of cellulose. Cellulose is the sugar-containing component needed to make the ethanol. Purdue scientists and experts at the U.S. departments of Agriculture and Energy say corn can only be part of the solution to the problem of replacing fossil fuel. In 2005 ethanol accounted for only 4 billion gallons of the 140 billion gallons of U.S. transportation fuel used — less than 3%. About 13% of the nation’s corn crop was used for that production. “We need a bioenergy crop that can grow many places year-round,” Meilan said. “The genus Populus includes about 30 species that grow across a wide climatic range from the subtropics in Florida to sub-alpine areas in Alaska, northern Canada and Europe.” To advance production of non-fossil fuels, Chapple and Meilan are using genetic tools to modify the poplar and then study how the alterations changed the plants’ cell walls. Meilan also is attempting to find ways to produce trees that are reproductively sterile so they are unable to transfer introduced traits to wild trees. “Poplar is a low-maintenance crop; plant it and wait seven years to harvest it,” Meilan said. “You’re not applying pesticides every year; you’re not trampling all over the site every year and compacting the soil. You’re allowing nutrients to recycle every year when the leaves fall and degrade.” Approximately 10 tons of poplar could be grown per acre annually, representing 700 gallons of ethanol. Changing the lignin composition could increase the annual yield to 1,000 gallons of ethanol per acre, according to experts. Planted on 110 million acres of unused farmland, this could replace 80 percent of the transportation fossil fuel consumed in the United States each year.