California, USA — Winners of the Excellence in Renewable Energy Awards for Project of the Year Award represent facilities that signified excellence in five technologies: Solar, Wind, Biomass, Geothermal and Hydro.

Editors from the Renewable Energy World network, which includes five print magazines and four websites, selected the winners from among the finalists in each technology category. The award winners were announced and recognized on Tuesday night at the Renewable Energy World North America Conference and Expo, in Long Beach, California. Video interviews will be conducted with many of the winners during the show and will be posted on RenewableEnergyWorld.com in the coming weeks.

To be eligible for an award, a project needs to have been completed in 2011, be in North America and make a significant impact on the entire renewable energy industry.  When judging the finalists, network editors considered the technology that was employed as well as the projects’ impact on the industry at large and on the communities in which they were installed.

For those in the renewable energy industries, success is often measured by the projects they produce. From that view, 2011 was a banner year. Some technologies, like solar, are working to achieve large-scale developments. Others, like hydro, are striving to go smaller by tapping into the power of water with new and inspiring approaches.

Here are some of the projects that are helping to change the energy landscape. 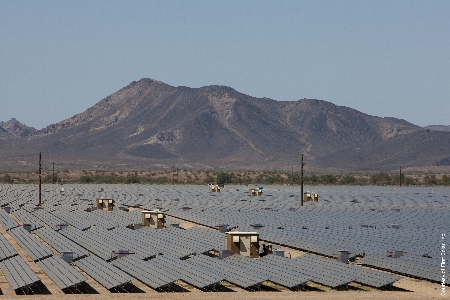 Critics may be unable to separate the Department of Energy’s Loan Guarantee Program from the Solyndra bankruptcy. A sweeping view of the sprawling Agua Caliente Solar Project on 2,400 acres in the southwest corner of Arizona may give them a different perspective of the program’s legacy. Once completed, Agua Caliente will be a 290-MW solar park powered by First Solar thin-film panels. More than anything, though, it will come to represent the major shift currently underway in solar energy — that is, the move toward large-scale solar. With 39 MW online as of December, Agua Caliente already ranks among the biggest solar farms in the country.

Once completed in 2014, it will be several times bigger, but it may pale in comparison to even bigger projects that are coming along right behind it, projects like the 550 MW Topaz Solar Farm in California.

When the Department of Energy started its loan guarantee program, it hoped that the federal backing would spur development and provide investors with confidence that large-scale solar projects would be a good bet. That blueprint so far is proving successful. NRG Energy acquired the project from First Solar in August, and in December, investment guru Warren Buffett doubled down on the future of American solar by acquiring a 49 percent stake in the project. Earlier in the month Buffett’s MidAmerican Energy purchased the Topaz project outright in a deal that many took as a signal to the viability of large-scale solar. Topaz was among the large solar projects that was unable to close on a conditional loan guarantee with the DOE in September.

Agua Caliente will deliver power to the California market through a signed PPA with Pacific Gas and Electric. It is also expected to create 400 jobs during construction.

Deep in the heart of coal country is a wind farm that’s serving as a model for how renewable resources and power storage can work together to help utilities better manage the load. 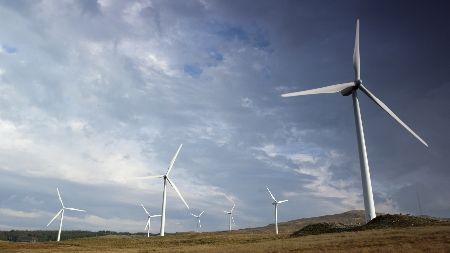 The AES Laurel Mountain project spans 13 miles along the mountain ridges and includes 61 GE wind turbines that feed into the PJM Interconnection, which serves more than 50 million people.

The project has an impressive 98 MW capacity, but its most noteworthy feature is the 32 MW of integrated battery-based energy storage from A123 Systems. According to AES, the energy storage system is currently the largest of its kind in operation in the world and it will provide 260,000 MWh annually.

While wind is maligned by some for its variability in production, others see this project as an example of how a wind-storage partnership could provide utilities with a stable energy source.

When the wind is blowing and grid operators don’t need the power, they direct it instead to a field of lithium-ion batteries stored inside rows of shipping containers right on site for use later on. When there isn’t enough wind, operators can tap into the reserve capacity to smooth out delivery.

The storage capacity, in effect, does what intermittent sources like sun and wind cannot — it matches supply to demand. It can also greatly reduce the amount of wind power that is curtailed — a practice in which turbines are shut out because the power they could produce is not needed at that exact moment. From a developers point of view, a project facing less likelihood of curtailment, could be a whole lot more profitable and much more attractive to investors if costs for energy systems tied to wind developments continue to come down.

The Pacific Northwest is dominated by large powerful dams that have fueled the region’s growth but in many ways have scarred its environment. 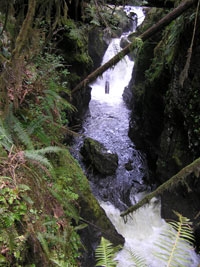 Northeast of Seattle along the edge of the Cascades runs Youngs Creek, a small tributary prized for its scenic hikes, waterfalls and salmon runs. Building a hydro project, no matter what size, has proved to be an almost insurmountable obstacle in Washington in recent years. In fact, the Youngs Creek Hydro Project, dedicated in October, became the first new hydroelectric project in state in nearly two decades. But it hasn’t been for a lack of trying. Construction on the Youngs Creek project itself began in the mid-1990s and was halted for some time before developers finally flipped the switch in 2011.

The 7.5 MW project cost $29 million to complete, and it answers some of the most pressing issues for hydropower. Intake occurs above a waterfall, which provides a natural barrier to migrating fish, such as salmon. A channel of water is diverted rapidly through a three-mile underground pipeline that drops 920 feet in elevation to the powerhouse. The force of the falling water powers the turbines, and it is then returned to the creek downstream. Migrating fish remain unaffected and the river does not change course.

The run-of-the-river project adjusts its power automatically depending on the flow and the condition of the river. According to the Snohomish County Public Utilities District, which planned and developed the project, the project gives the agency greater flexibility with its power supply because it’s a locally generated, reliable resource that provides energy at times of the year when it’s needed the most.

Amidst a year of frustrating inactivity in the geothermal industry, many project developers are struggling with uncertain policies and difficult development procedures. This is an especially hard pill to swallow in the geothermal-rich state of Nevada. 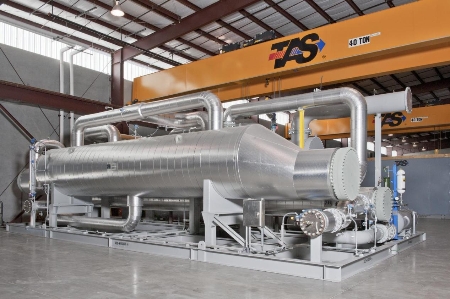 But despite a mostly quiet 2011 in the geothermal industry, the Beowawe Geothermal Facility in Nevada managed to develop a 2.5-MW addition to their existing 16.7-MW geothermal plant that went online in 1985 with the help of a DOE loan. The project demonstrates technology that takes advantage of resources not generally considered viable for utility scale deployment — proving the technical and economic feasibility of electricity generation from geothermal resources of 205°F. Beowawe utilizes the first commercial use of a low temperature bottoming cycle at a geothermal flash power plant.

It uses new binary expanders that allow the use of lower resource temperatures for geothermal and waste heat applications.  An axial turbine focused mainly on geothermal and waste heat applications using R134a and R245fa and as the primary working fluid, covers gross power output from 500 kW – 5.0 MW output with temperatures from 200 – 500°F (97 – 260°C).

Though the plant has experienced resource decline over its life and had reduced output, well below the design output, the new technology used in this addition will help take advantage of lower temperatures and continue to produce clean energy.

This 2.5-MW binary plant was completed by Terra-Gen Power in conjunction with TAS Energy’s technology. Said Jim Pagano, CEO of Terra-Gen Power, “An increase in the DOE’s geothermal budget allowed this project to become a reality, which lead to additional jobs and promises more clean renewable energy for the future as this project paves the way for additional low temperature binary projects in Nevada and elsewhere.”

The growing field of bioenergy faces obstacles that can hinder financing for large-scale projects. But the federal government has caught on to its numerous advantages. The Savannah River Site in Aiken, South Carolina, replaced coal and oil-fired generation by incorporating a biomass-fueled steam cogeneration plant and two smaller biomass-fueled plants. The facilities are expected to have the capacity to convert 325,000 tons of fuel per year, including local forest residue and wood chips, into 20 MW of clean power. 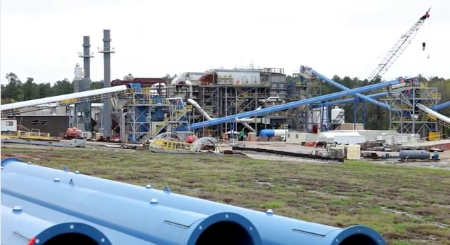 Financing was conducted with a system of “smart contracting,” called an Energy Saving Performance Contract (ESPC), which allows the federal government to pay for contracting once energy savings have been realized. The $795 million DOE ESPC allowed Ameresco to finance, design, construct, operate, maintain and fuel the biomass cogeneration facility, which includes three biomass-fueled renewable energy plants located at the Savannah River Site. The 19-year agreement could save the government $944 million in energy, water, operations and maintenance costs.

The project is the federal government’s largest single source of performance-based renewable energy savings, as 325,000 tons of fuel will be converted into 20 MW of clean power, which is expected to save $34 million in utility costs in the first year alone.

The project is “the large largest single-source of performance-based renewable energy savings underway in the federal government through the ESPC program,” Ameresco said.

Adding to its numerous benefits, since construction began in 2009, the project is estimated to have sustained and created approximately 800 jobs spanning the mechanical, construction, engineering and supplier sectors over the 30 month construction period. The plant will sustain 25 full-time jobs on-site.

Last but not least is our Readers’ Choice Award. After the editors select finalists in each of the innovation and project of the year categories, we open up voting to RenewableEnergyWorld.com’s readers. This year, more than 6,000 people voted and the winner they selected is unique in the solar industry not for its technology but for its location. 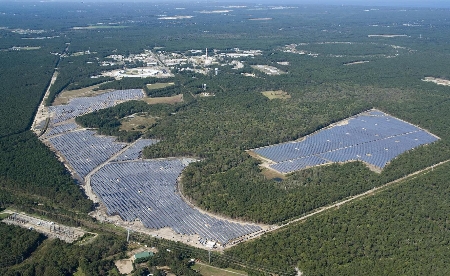 If you’re looking for large-scale solar farms, you’ll probably want to head to the sun-soaked regions of the Southwest, where some of the biggest projects already exists and where some of the behemoths to come are laying their foundations.

The Northeast, with its less favorable climate and harder-to-come-by open space, isn’t known for its large-scale potential. Even in a place like New Jersey — the second biggest solar market in the country — installations are mostly limited to residential and commercial rooftops.

So it can be seen as a bit of a surprise when one of the year’s largest solar developments pops up in a place like Long Island. Located on federal land at the U.S. Department of Energy’s Brookhaven National Laboratory, the largest solar project in the northeast overcame several siting challenges because of its proximity to World War II artifacts, environmentally sensitive habitat, radiological contamination and the presence of the endangered tiger salamander.

The 32-MW project will sell all of its power to the Long Island Power Authority under a 20-year power purchase agreement.

In addition to the power produced, the Long Island Solar Farm helped establish the Northeast Solar Energy Research Center and Lab where researchers will use the project to examine solar integration into the grid. Officials hope research and development done onsite will help further drive down the cost of solar and will drive up the implementation of the technology in the northeast where cloud shadow, snowfall and overall climate provide challenges far different than the concerns found in the southwest.