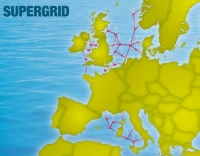 London, UK – In early December 2010, as Europe was grappling with sovereign debt crises and angry protests swept through its cities, a group of Ministers and grid operators met quietly to sign a deal that could help to secure the development of hundreds of gigawatts of renewable energy capacity.

The Northsea Countries Offshore Grid Initiative Memorandum of Understanding is the latest step in an ambitious program to put in place the infrastructure and market conditions to ensure that renewable energy generated offshore can be fed into the grid and brought to where it is most needed. The supergrid is considered an essential step in the development of Northern Europe’s offshore wind industry and has the potential to unlock billions of euros in investment in key infrastructure.

At the heart of the plan is a vast series of undersea grid connections stretching down the coasts of the UK, France, Denmark, Netherlands, Germany, Ireland, Belgium, Norway, Sweden and possibly even down into Spain and Portugal. This offshore development would be combined with an improved onshore network, a more uniform system of grid management and interconnecting High Voltage Direct Current (HVDC) cables between countries.

Currently there are around 35-40 GW of offshore wind power capacity in various stages of planning in the UK alone, with many other countries in the region also laying out ambitious plans. Long term, the projections are for more than 169 GW of offshore wind operating in the North Sea by the middle of the century.

“The North Sea is such a fantastic energy resource for renewables that can service the whole region and a single electricity market will facilitate that sort of exploitation,” said Alex Murley, of RenewableUK, a group familiar with the project.

“It would allow you to cost effectively develop energy resources on a regional rather than a national level. 95% of current electricity is consumed within the country in which it is generated. Can you imagine Spain consuming 95% of its oranges?” asked Murley.

While non-binding, the recently signed MOU builds on previous in-principle agreements and seeks to promote cooperation in developing an offshore grid.  Currently, there are three working groups set up to examine and tackle the technical, political and regulatory barriers.

The idea of an offshore suprgrid has been around for many years, and one of its main evangelists is Dr. Eddie O’Conner, CEO of Maintream Renewable Power and formerly of Airtricity. Back in 2002 O’Conner helped to conceive Friends of the Offshore Supergrid (FOSG), an industry-led body that was formally set up in March 2010 to push for speedier development of grid infrastructure.

“The FOSG came together to promote the concept of a supergrid. We have assembled the supply chain: providing the consulting engineers, the manufacturers of the HVDC equipment, the cable manufacturers and so on. We intend to advise governments as to how the supergrid can be rolled out as a single grid,” he explained in an interview with Wind Energy Update last year.

Despite the recent progress there remains a number of unresolved issues over who will own and operate the grid, who will pay for it and who will profit.

“There are various different ownership models and operator models. It is something that the third package [EU’s latest energy policy] is looking at.  The merchant model approach is something that is on the table now and we would look to encourage in the future,” commented Murley.

‘Merchant model’ refers to a system under which new companies could be established to develop and own offshore interconnectors or other infrastructure.

There also remains the question of political will, since the development of a large offshore grid will revolutionize European energy markets, bringing a single energy market significantly closer than governments have so far been willing or able to do.

Nonetheless, there does appear to be momentum behind the proposals.  The third European energy package contains much of the policy basis for an offshore grid, with its emphasis on market liberalization and unbundling of grid ownership, energy generation and transmission. Despite some opposition from EU heavyweights France and Germany, the package was adopted in 2009, an example of the broad support it enjoys. New pan-European bodies such as European Network of Transmission System Operators for Electricity (ENTSO-e) and Agency for the Cooperation of Energy Regulators (ACER) have been established to help improve communication and coordination across the sector.

While there are a great number of details still to be worked out before a clearer picture of the new grid emerges, a number of concrete proposals are already in the planning. By 2020, RenewableUK estimates that there may be around 25 GW of offshore wind power capacity in UK waters (up from just over 1 GW today).

At the same time there are concrete plans for an additional 6.5 GW of interconnector cables linking the UK to the rest of Europe (at present there are 2.45 GW of interconnectors). The ability to trade large volumes of electricity with its neighbors should greatly enhance the usefulness of the UK’s offshore wind resources and overcome the challenges of intermittency associated with wind power.

Below is a video put together by Mainstream Renewable Power on the potential for Europe’s supergrid. It’s a big vision. But if it works as planned, it could give Europe a big advantage in the offshore wind space.