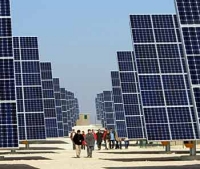 [RenewableEnergyAccess.com] European progress towards supporting renewable energy still ranks highest in the world but this effort is not spread evenly throughout EU member countries, a situation leading this week to legal action from the European Commission.

In spite of an obligation to take the necessary measures to transpose Community legislation on renewable electricity into national law before October 2003, the European Commission this week had to launch legal proceedings against eight countries that failed to meet this deadline. The increase in the use of renewable energy figures as a top priority in the Commission’s recently published Green Paper on a European Strategy for Sustainable, Competitive and Secure Energy. “Europe should make full use of the potential offered by renewable energy sources. This aim will only be realized through a long-term commitment to develop and install renewable energy and through the active involvement of all Member States to promote the use of green energies,” said Commissioner in charge of energy, Andris Piebalgs. Amongst the Member States still not in compliance with Community legislation promoting renewable electricity in Europe, four (Italy, Poland, Czech Republic and United Kingdom) have failed to report their progress on the use of electricity from renewable energy sources to the Commission, while five (Italy, Latvia, Cyprus, Greece and Ireland) have taken insufficient measures to enable an adequate promotion of renewable energies. The legislation on renewable electricity requires Member States to implement legislation, administrative provisions and measures — fair grid access and a guarantee of origin — to enhance the use of renewable electricity. The Commission has thus initiated the first stage of the infringement procedure with a letter of formal notice. The Member States concerned can subsequently submit their observations to the Commission within two months. The Commission may then decide to start the second stage of the procedure by sending them a reasoned opinion on the basis of these observations, while the last would mean taking the countries to the European Court of Justice. The aim of the Directive is to promote the use of electricity from renewable energy sources. The Directive sets a target of 21% for the share of electricity from renewable energy sources in total European electricity consumption by 2010 — the current share stands at 14%. Member States are required to set national targets and to put in place the appropriate measures to achieve the European target. The European Wind Energy Association (EWEA) came out in strong support of the Commission’s actions, saying that several Member States do not respect their commitments in terms of promoting renewable electricity and opening their energy markets. “Effective competition in the conventional power market is a precondition for creating a level playing-field and, eventually, an undistorted and well-functioning market for renewable electricity,” said Christian Kjaer, CEO of EWEA. “By its legal actions today, the European Commission has demonstrated its commitment to removing discriminatory practices and structural problems that are sources of constant frustrations for the European wind energy industry.” This lack of progress among member states extends to the EU Biofuels Directive. The European Commission also this week sent a “reasoned opinion” to Finland and a letter of formal notice to Denmark as the two countries have still not given adequate reasons for having set targets considerably lower than the 2% reference value laid down by the biofuels directive for 2005. A letter of formal notice has also been sent to Luxemburg due to an incomplete biofuel report for 2005, and a reasoned opinion to Italy due to its failure to submit it. “Biofuels are the only known substitute for fossil fuels in transport today,” said Commissioner Piebalgs. “They contribute to our security of energy supply, reduce greenhouse gas emissions and create jobs in rural areas. Most Member States are going to great lengths to increase the use of biofuels and I regret that a small number of them have yet to join in on this effort.” The European Commission simultaneously decided to close its cases against Greece, Ireland and Poland. These Member States originally set low targets for 2005 without giving adequate reasons but have now adopted more ambitious targets for later years since. Replies to letters of formal notice on the same subject from Hungary and the United Kingdom are currently being examined, while a reply is still expected from Italy. Biofuels’ share of the petrol and diesel market in the EU was only 0.6% in 2003 and still less than 1% in 2004. The biofuels directive sets the reference values of a 2% share in 2005 and a 5.75% share in 2010. Member States may set their own indicative targets — however if these differ from the reference value, they must explain why. The Commission will report on progress towards the 2005 reference value and targets later this year.