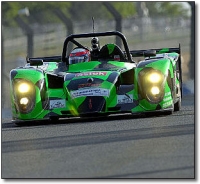 The description might sound like a bad joke, but the DM139 LMP1, Judd V10 is fast and black and “green” all over. So fast, in fact, that the Nasamax racing team placed 17th out of 26 cars to finish at this year’s Le Mans 24 hour race with the DM139, which runs entirely on bioethanol fuel. It was the second year the team qualified for international motor sport race, but the first year the drivers took it to the line to become the first team to place with a car run on alternative fuels.

Suffolk, United Kingdom – July 28, 2004 [SolarAccess.com] “It’s very interesting out there. There are people flying off all over the place, perhaps a few who are new to Le Mans,” night driver Werner Lupberger said. The Kent, England based team has a core of experienced scientific and racing personnel who belong to an international racing program designed to promote low-emission renewable fuels. Motor sport racing is a big industry and a big fuel consumer, and not what many people think of as environmentally friendly. “The key issue on most people’s minds at the moment is the environment and ways to sustain it,” team Technical and Renewables consultant John McNeil said. “After so many years in motor racing, with more Le Mans 24 Hour races than I’d care to remember, and working in the field of renewable energy, it was obvious to us that the two could be brought together with great benefits to both sides.” Development partners for the green fuel venture are Applied Sciences Technologies (ASTEK) and Cosworth Racing. ASTEK is a research and development company that specializes in renewable and sustainable technologies. They have developed technology for the use of alternative fuels in internal combustion engines, and methods for the production of bioethanol from cellulosic materials. Fuel for the DM139 engine is made from sugar beets and potatoes grown in Northern France. Ethanol is more flammable than regular fuel, however, so ASTEK had to incorporate a Nitrogen Blanketing System (NBS) to reduce the possibility of fire within the fuel tank of the car. Space in the fuel tank is normally filled with oxygen-rich air as the fuel is used. An NBS fills the space with nitrogen-rich air instead, and this stabilizes the ethanol fuel vapor and mist in the tank so the risk of combustion within the tank is greatly reduced. Similar systems are used in the aircraft industry, according to the Nasamax Web site. Cosworth Racing is a division of the Ford Motor Company, and they designed, developed and manufactured the XDE engine used by the Nasamax team. They are renowned for their Formula One engine development for teams such as Jaguar and Jordan as well as for the WRC Rally program. “This is the first time for years Cosworth Racing has been involved on a factory support basis in sports cars. It also marks the first time we have used renewable fuel, bio-ethanol, in a racing engine and it is very exciting to be spearheading this technology,” said Nick Hayes, Managing Director for Engineering at Cosworth Racing. Cars that qualify for the LeMans have to meet race regulations, so the Nasamax team had to work on ways to meet the regulations while ensuring the DM139 could compete with the other cars in terms of tank capacity and fill rate during refueling. Bioethanol fuel contains only 60 percent of the energy of the same volume in gasoline, so the car needed 135 liters of tank capacity to carry more of their 205 percent proof fuel than a standard racecar. Information on the team’s Web site used a comparison of coffee and espresso to explain why a greater volume of ethanol (coffee) is necessary to run the DM139 for the same amount of time as a car run with fossil fuels (espresso). An espresso carries a certain amount of caffeine in a small quantity of drink, while regular coffee will carry the same amount of caffeine but in a greater quantity of the drink. If caffeine intake were the goal, then a person would need to drink more coffee than espresso. If fuel combustion is the goal, then a driver needs more ethanol because the efficient fuel burns up faster than fossil fuels. Engine performance with ethanol was everything the team could have asked for, but regular racing setbacks kept the car from moving up any higher in the race ranks. Regular tire changes, a starter replacement and a persistent misfire made the team lose laps. “We lost time trying to find the misfire and eventually we had to just get on with it,” McNeil said. “It’s frustrating as we know what lap time we could have had, and we know it would have put us safely in the top ten, even the top six. However, these were the usual setbacks any car could have in racing, and we have still shown that this fuel can be competitive in the top level of international motor sport. To do so with a new racing car to completely new regulations is also a major achievement for the whole team. We will be back next year.” The three drivers completed a total of 316 laps around the 8-mile race circuit at Le Mans. McNeil estimated they lost about 41 laps to pit stops for the misfire. Le Mans takes place every year in the Sarthe region south west of Paris, and has always been a showcase for the debut of new technologies in the harshest competitive environment in motor sport. The 8-mile circuit is a mix of permanent track and roads. Information for this story courtesy of Nasamax public relations