The Bureau of Reclamation is working to regain capacity lost as a result of drought-related low water levels and to improve efficiency of the units at 2,074-MW Hoover. Work includes replacing the wicket gates in 11 units to increase flow rates and overhauling all 17 turbines. The wicket gate replacements to date have recovered 84 MW with an annual value of $2.7 million. Additional power produced by the 11 units overhauled to date equates to nearly $3.2 million a year. 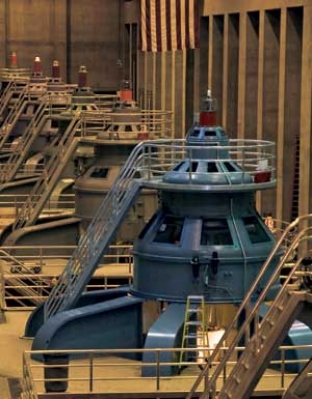 The 2,074-MW Hoover project began operating in 1935 on the Colorado River between Arizona and Nevada. The U.S. Department of the Interior’s Bureau of Reclamation operates the project, which provides electricity to about 1.3 million people in Arizona, California, and Nevada; water for agricultural and municipal use; and flood control.

To keep the two Hoover powerhouses (one on the Nevada side and one on the Arizona side) operating efficiently, Reclamation began overhaul work on the 17 turbines in 1998. Then, in 2001, water levels in the Colorado River Basin began dropping, reducing water available in Lake Mead, the reservoir behind the dam. The following year, Reclamation began investigating methods to retain unit performance during low water periods. Reclamation decided to perform modifications designed to increase flow rates through the units.

As of May 2009, 11 of the 17 units had been overhauled, producing additional power valued at $3.2 million per year. In addition, work to increase flow had been completed on eight units, resulting in recovery of 84 MW of capacity at Hoover. This recovered capacity has a value of $2.7 million per year. Work continues to complete the remaining six turbine overhauls and to regain lost capacity from at least three more units.

The need to regain lost capacity and improve efficiency

When water levels in the Colorado River Basin began dropping in 2001, Reclamation did not know it would be the beginning of an eight-year drought. However, personnel foresaw the opportunity to make improvements to retain performance of the facility.

In 2002, Reclamation personnel performed an initial scientific study and an economic analysis of the situation.

The drought continues today, making these improvements invaluable to continue providing low-cost electricity from the Hoover facility. In 2009, available capacity of the facility is only about 1,700 MW because of the reduced head pressure resulting from the low water level in Lake Mead. The maximum elevation of this reservoir is 1,220 feet; current elevation is 1,095 feet.

The 17 Francis turbine-generating units at Hoover were installed from 1936 to 1961. Because of the span of years, the equipment is not identical. There are five turbine designs in operation at Hoover, requiring careful and detailed inspections of each unit to ensure that upgraded and/or rehabilitated components have the proper fit and function.

The work to improve plant efficiency began in 1999, after some units at the plant had been operating for more than 60 years. The goal of this work is to restore machinery to a more efficient operating condition. On each unit overhauled, Reclamation personnel determined they could improve efficiency by 3 to 4 percent. This would add about 8,000 megawatt-hours of electricity per year per unit, with a value of $290,000 per unit.

Power available from a hydro turbine-generator unit is directly proportional to head pressure and flow rate. Because Reclamation cannot control head pressure at the plant, the most direct, quantifiable option for regaining lost capacity at Hoover is to increase flow through the unit.

The best method for increasing flow through the Hoover units was to modify the wicket gate system. Each unit has 24 large cast steel wicket gates, each 6 feet 3 inches tall and weighing 1,500 pounds. Plant personnel are improving the flow capacity to the turbines by:

— Replacing old wicket gates with new gates made of stainless steel, with a thinner hydraulic profile; and

— Extending the linear travel of the mechanical mechanisms that operate the wicket gates (called overstroking).

To achieve the most benefit, Reclamation personnel replaced the wicket gates in the units that would provide the most power output at reservoir elevations below 1,180 feet. They used the model test data supplied by the original equipment manufacturers for each of the 17 units as a guide toward deciding which units to modify. Modification of 11 units will allow Reclamation to regain about 100 MW of lost capacity. The remaining six units provide a lesser benefit, with a projected total gain of only about 25 MW of lost capacity. Work may proceed on these units at a later time.

To improve flow, the new gates need to have a more streamlined flow profile and a larger maximum opening when compared to the old wicket gates. After installation of the new stainless steel wicket gates, the maximum opening is 9.70 inches. This increased the maximum flow rate to the turbine to 3,600 cubic feet per second (cfs) from 3,400 cfs. The end result is a capacity increase of 7 MW at lake levels below 1,180 feet elevation.

Reclamation used a contract method called Indefinite Delivery/Indefinite Quantity (IDIQ) procurement contracts. The IDIQ method uses a systematic approach to identify and evaluate a potential vendor’s ability to meet the supply requirements for a given set of needs, before the contract award. Bidders submit a detailed work history that demonstrates they have the capacity to perform the work.

Reclamation then awards contracts to three to five vendors. This award provides the base contract and terms under which all future work will be performed. Subsequent delivery or task orders are sent to the contract recipients for each requirement. Each contractor then submits a proposal for that requirement that includes the price, technical, and delivery terms that contractor can offer.

Reclamation plant personnel are installing the new wicket gates, following a specific schedule using modern project management methods. The first new wicket gates were installed in January 2005; work on the most recent was completed in May 2009.

Hoover personnel also focused on the possibility of opening the original wicket gates further than they were originally installed, to increase flow rate. To accomplish this, personnel modified the original wicket gate water regulating mechanisms for some turbines to “overstroke.” This involves extending the wicket gate servomotor linear travel by about 1 to 4 inches, depending on the unit. This modification provides a larger maximum wicket gate opening, which allows a flow rate increase of 500 cfs (from 2,900 to 3,400 cfs).

Five units have been modified since 2007, and the final unit is scheduled to be complete by the end of 2011. Reclamation conservatively estimates minimum additional capacity of 4 MW from each unit.

Reclamation began the capacity improvement work in 2005 with installation of new wicket gates in Unit A1. This increased unit capacity by 7 MW. After the completion of this unit showed quantifiable benefits, Hoover power customers approved the funding for purchase and installation of new stainless steel wicket gates in seven additional units. Work on five of these units is complete, and two more will be completed during the next two years.

The total increase in generating capacity achieved at Hoover since 2005 is 84 MW, and about 19 additional megawatts are scheduled in the next three years. As such, this project has direct measureable benefits to electric customers whenever the water level in Lake Mead is 1,180 feet or lower. For example, using a conservative wholesale market price for capacity of $2,700 per MW-month (estimating 720 hours in a month), the value of 84 MW of capacity at Hoover is $2.7 million per year.

As of May 2009, the cumulative cost of the capacity improvements was $6.2 million. The final cost of the work is estimated to be $8 million.

Additional benefits of the work to regain lost capacity include the increased durability and longevity of the new wicket gates and their effect on surrounding components. For example, over time Reclamation expects less turbine cavitation at the leading edges of the runners because of the uniform velocities across the new wicket gates. Facing plates also will experience less damage from leakage compared to the old wicket gates.

Another strategic goal for Reclamation at the Hoover project is to improve unit operating efficiency. This work will allow Reclamation to continue to produce as much energy as possible for a given flow of water. Two of the major efforts Reclamation has undertaken to improve efficiency are overhauling the turbines and decreasing water leakage.

Plant personnel began work to overhaul the first unit at Hoover in October 1999. This work, which is intended to restore existing machinery to a more efficient operating condition, is being performed by in-house maintenance, engineering, and operations staff.

Overhauling a hydro unit to obtain better efficiency is equivalent to overhauling an automobile engine to improve fuel economy. Efficiency of the units at Hoover improves 3 to 4 percent after a turbine overhaul, which equates to an additional 8,000 megawatt-hours per year per unit. The wholesale market value of this added energy is $290,000 per unit per year.

Preventing water leakage in the units results in more water available to produce electrical energy. The second aspect of the unit efficiency improvements involves work to reduce the high-pressure leakage of water through the wicket gates that occurs when the units are shut down or operated in condensed mode (the unit is rotating at normal speed but no water is passing through the wicket gates or turbine). This work involves installing new facing plates, turbine seal rings, wicket gate bushings, and operating ring pins and bushings. Precision alignment of these components during installation of the new stainless steel wicket gates reduces the operating clearances between the moving parts, reduces downstream water leakage, and improves unit control accuracy.

The wholesale market value from reducing leakage through the wicket gates at Hoover is $200,000 per unit per year.

As of May 2009, the wicket gates in six of the 17 Hoover turbine-generator units have been replaced, recovering 52 MW of lost capacity. Overstroking of five units has regained 32 MW of capacity, for a total capacity recovery of 84 MW to date. Further modifications are scheduled through 2011 on three additional units (new wicket gates in two units plus overstroking of one other unit), which will result in 100 MW to 103 MW of total increased capacity at Hoover Dam.

Its new lamp technology casts focused illumination 65 percent brighter, without draining the rechargeable battery before a full shift of inspection work is completed, the company says.

Zoom inspection is an alternative to inspections that require remotely operated vehicles. Contractors can use it to survey pipe condition before bidding services and to document completed work.

Eaton Corp. announces interactive online demonstrations of many of its products, including controllers, switchgear, and protective relays.

The 13 interactive demonstrations explain the features and benefits of each product line, the company says.