Researchers in the Cockrell School of Engineering at The University of Texas at Austin have used a combination of metabolic engineering and directed evolution to develop a new, mutant yeast strain that could lead to a more efficient biofuel production process that would make biofuels more economically competitive with conventional fuels.

Their findings were published online in the journal Metabolic Engineering in March.

Beyond biofuels, the new yeast strain could be used in biochemical production to produce oleochemicals, chemicals traditionally derived from plant and animal fats and petroleum, which are used to make a variety of household products.

Hal Alper, associate professor in the McKetta Department of Chemical Engineering, and his team have engineered a special type of yeast cell,Yarrowia lipolytica, and significantly enhanced its ability to convert simple sugars into oils and fats, known as lipids, that can then be used in place of petroleum-derived products. Alper’s discovery aligns with the U.S. Department of Energy’s efforts to develop renewable and cost-competitive biofuels from nonfood biomass materials. 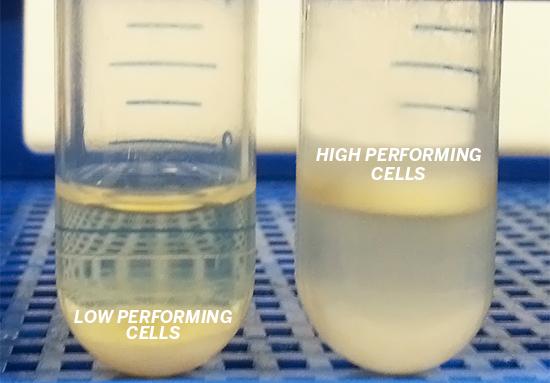 Alper and his team have developed yeast cells that produce so many lipids, the cells float to the top of a tube.

“Our re-engineered strain serves as a stepping stone toward sustainable and renewable production of fuels such as biodiesel,” Alper said. “Moreover, this work contributes to the overall goal of reaching energy independence.”

Previously, the Alper team successfully combined genetically engineered yeast cells with ordinary table sugar to produce what Alper described as “a renewable version of sweet crude,” the premium form of petroleum. Building upon this approach, the team used a combination of evolutionary engineering strategies to create the new, mutant strain ofYarrowia that produces 1.6 times as many lipids as their previous strain in a shorter time, reaching levels of 40 grams per liter, a concentration that could make yeast cells a viable platform in the creation of biofuels. The strain’s high lipid yield makes it one of the most efficient organisms for turning sugar into lipids. In addition, the resulting cells produced these lipids at a rate that was more than 2.5 times as fast as the previous strain.

“This significant improvement in our cell-based platform enables these cells to compete in the biofuels industry,” Alper said. “We have moved to concentration values that begin to align with those in other industrial fuel processes.”

Alper and his team improved the performance of Yarrowia through a combination of metabolic engineering and directed evolution, which, like the process of natural selection, seeks to identify and cultivate the high-performing cells. In this work, the researchers recognized that cells with high lipid content would float to the top of a tube, whereas cells with lower lipid content would settle down to the bottom. The researchers used this “floating cell scheme” to identify the best-performing cells.

The researchers used these high-performing cells, cells that produced more lipids and at a faster rate, to obtain the final yeast with improved function.

“We were able to iterate the strain through a process of directed evolution, which involves mutation and selection, and with each cycle we were able to get things better and better,” Alper said.

The researchers’ method and platform are patent pending. Alper’s lab is continuing to work on ways to improve how the yeast strain converts sugar into lipids, and on the types of lipid products they can produce.

The University of Texas at Austin is committed to transparency and disclosure of all potential conflicts of interest of its researchers. Hal Alper has research funding from various government, nonprofit and private sector sources, including the National Science Foundation, the Welch Foundation and Shire Pharmaceuticals.