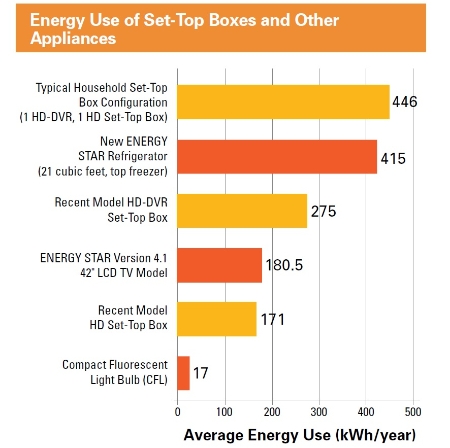 A recent report at the liberal blog Think Progress tries to make a political point, but in fact it makes an economic one, and points to an enormous business opportunity.

Every market has two sides, supply and demand. Many people in the renewable energy space focus too much on supply, not enough on demand. And efficiency remains the easy money.

This has long been obvious in the tech market, which I have covered for most of my reporting career. Computers were introduced because they saved money. I brought my first PC to work with me in 1982 and was able to do the work of three reporters, because I could deliver clear, error-free printouts of stories in minutes it took colleagues hours to complete.

Efficiency is the key to a sale in the business-to-business market, and all sorts of opportunities have followed from it. Save me a dollar doing the same work and that’s a dollar in my pocket – sure you can share it.

The Think Progress report shows that Digital Video Recorders (DVRs) can be the biggest energy hogs in a consumer’s house, because they don’t turn off when they’re not recording. They use more than a common refrigerator – 446 kilowatt-hours per year. Combine them into one unit and you cut that nearly in half, to 275. At about $10 per kWh, that’s about $1,700 per year, a cool $140 per month. Money, in the pocket, just by changing how you watch TV.

You can do that calculation everywhere in any consumer’s home. Show them how to save money, show them how fast your gear pays for itself, and we all share the savings. It’s money in the consumer’s pocket, money in your pocket.

And it’s easy money. Because America is the most wasteful user of energy in the world we are often nagged about how inefficient we are. But the flip side of that is that we have more easy money available to us, individually and collectively, than people anywhere else.

Your investment in saving people money from their daily energy use will give you a faster return than any gee-whiz solar panel, and that will be true for years to come.

So while we seek to change the world, how about making some easy money?