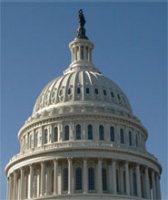 Washington, D.C. [RenewableEnergyAccess.com] The House is expected to vote today or tomorrow on an updated energy bill that now includes a national Renewable Electricity Standard (RES) and a $21 billion tax package that advances the development of renewable energy and encourages energy savings and efficiency.

Key provisions in the tax legislation include long-term extensions of the investment and production tax credits, tax credit bonds for renewable energy and conservation, and extensions of energy efficiency tax incentives.

“Our country needs to make a big turn in terms of energy policy, and this tax package will help to steer the ship. This legislation will help America to use more carefully the resources we have today, and to balance our energy incentives toward the fuels of tomorrow,” said Senate Finance Chairman Max Baucus (D-MT). “An economically strong, globally competitive future for America just won’t run on the fuels of the past. It’s high time to focus our energy efforts on sources that will be available and affordable for Americans decades from now. And it’s appropriate to pay for these new energy incentives by closing loopholes in our current energy tax policy. I am sure the Senate will have a robust debate on some provisions of this important legislation, but I expect that we will all work together to see it passed.”

The Bill up for vote reportedly also contains a national RES that would require utilities to procure 15% of electricity from renewable sources.

Diana DeGette, (D-CO) said, “A national Renewable Electricity Standard is a major advance for renewable energy in this country. This standard is not only beneficial for consumers and businesses, but is also good for the environment. The tremendous success of Colorado’s RES program is just another reason why we should expand this program nationwide. Colorado and other states have led the clean and renewable energy revolution in the absence of federal action.”

According to press reports, the Senate is likely to reject the new bill. Sen. Pete Domenici (R-NM), the top Republican on the Senate Energy Committee believes that the tax provisions and the RES will preclude the Senate from passing the bill.

The Bill will also increase corporate average fuel economy standards to 35 miles per gallon by 2020, a measure that has bi-partisan support.

Chris Stimpson, Solar Nation Executive Campaigner believes that it was, at least in part, due to concerned citizens that the tax legislation made it back into the bill.  “The investment tax credit provisions had, apparently, been dropped completely from the bill.  But in the week before Thanksgiving, House leaders were so bombarded with e-mails, faxes and calls from outraged environmental and clean energy groups that they restored the tax title in a hurry,” he said.

Stimpson continuted, “It’s a fair bet that senators will get the same treatment if they try to dilute what the House has done.”