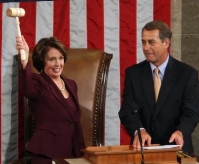 Washington, D.C. [RenewableEnergyAccess.com] After much speculation about the status of renewables in the upcoming Energy Bill, the House of Representatives passed legislation yesterday that included strong incentives for the industry, including investment and production tax credits and a Renewable Portfolio Standard (RPS). The Bill passed by a margin of 235-181.

“This is a very important day for our country. A day in which this Congress can declare itself a Congress for the future,” said House Speaker Nancy Pelosi in response to House approval of the Bill.

The Bill now moves to the Senate, where it will have a tougher time passing. Even if the Bill does move through, there may not be enough votes to override a Presidential veto.

“Speaker Pelosi and the House of Representatives delivered a great Bill for clean energy as we still try to broker in incentives for a few renewable technologies, and it is now up to the Senate who’s future is not so sure in the face of another threatened White House veto,” said Scott Sklar of The Stella Group, Ltd.

President Bush and some leading Republican Senators have voiced strong opposition to the $21 billion in tax incentives for renewables, paid for by repealing subsidies for the fossil energy industries. There are also concerns over the RPS, which has been vigorously opposed by some powerful utilities.

Passage of the House Bill is a big step, considering that only last month Democratic leaders were thinking of stripping out most of the provisions for renewable energy to make any legislation more likely to pass. Now after a hard-fought campaign by the renewable energy community, the long, bumpy road continues to the Senate where the future of the industry is less certain.