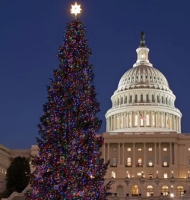 Washington, D.C. [RenewableEnergyAccess.com] The Congressional Democratic leadership will soon bring to the floor a comprehensive set of policies to drive clean energy into the coming decades which face the risk of a presidential veto by including $21 billion in tax incentives paid for by repealing oil and gas industry subsidies.

The proposals, not yet firmed at this writing, extend the Production Tax Credit placed-in-service date for the Section 45 renewable energy production tax credit for four years (through December 31, 2012) for qualifying facilities: wind; closed-loop biomass; open-loop biomass; geothermal; small irrigation hydropower; landfill gas; and trash combustion facilities. It also includes a new category of qualifying facilities — those that generate electricity from marine renewables (e.g., waves and tides). The package caps the aggregate amount of tax credits that can be earned for qualifying facilities placed in service after December 31, 2008 to an amount that has a present value equal to 35% of the facility’s cost. The proposal is estimated to cost $6.6 billion over 10 years.

Residential energy-efficient property is extended for six years (through December 31, 2014) and modifies the personal tax credit for residential solar electric, solar water heating, and fuel cell property. The modification raises the cap on the credit for solar electric property to $4,000. The proposal also adds a new 30% personal credit for residential wind property capped at $4,000. The proposal is estimated to cost $317 million over 10 years.

The Renewable Energy Portfolio Standard (RPS) has new language that still requires a 15% RPS by 2020, with utilities allowed to meet up to 27% of that overall requirement with 4 of the 15 percent utilizing energy efficiency. The cost cap is lowered to 2.5 cents (from 3 cents in the House-passed Udall amendment). Municipal utilities and co-ops are still exempt.

The Clean Renewable Energy Bonds (CREBs) package authorizes $2 billion for CREBs to be allocated equally among rural electric cooperatives, public power and governments for funding of section 45 eligible projects. The proposal is estimated to cost $550 million over 10 years.

Energy-efficient existing homes credit package extends the 10% investment tax credit for one year (through December 31, 2008) for expenditures to improve the energy efficiency of an existing home. Biomass wood stoves are added to the list of qualified energy efficient building property eligible for a $300 credit if the property has a heating coefficient of performance of at least 1.1. The proposal is estimated to cost $402 million over 10 years.

The Energy Independence and Security Act would require cars and light trucks sold in the U.S. to achieve a minimum fleet-wide average of 35 miles per gallon by 2020. The first congressionally mandated increase in corporate average fuel economy standards, or CAFE, since 1975, it would boost the requirement from the current model-year levels of 27.5 miles per gallons for cars and 22.2 miles per gallon for light trucks and sport utility vehicles. This specific program is one of the provisions that has produced a White house veto threat.

Where’s the $21 billion for these incentives coming from? The following subsidies to traditional energy companies: The selected revenue raisers: 1) a repeal section 199 for the big 5 oil companies and freeze the deduction at 6% for the rest of the oil and natural gas industry (raises over $9b), 2) changes in basis reporting, 3) a coal excise tax, 4) repeal depreciation of gas distribution lines granted in EPACT’05, 5) G&G modification (except it to be House proposal of 5 year moving to 7 years), and 6) changes in FOGEI and FORI (package eliminates the distinction between foreign oil and gas extraction income (“FOGEI”) and foreign oil related income (“FORI”). This relates to upstream production to the point the oil leaves the wellhead.

Senator Pete Domenici (R-NM) has vowed to filibuster this bill unless the oil and gas incentives are not touched and the Renewable Energy Portfolio Standard (RPS) is dropped. So this is a game of “chicken” with the White House and some key Republicans who are spearheading the interests, primarily, of the electric utilities and fossil energy industries lobbying vociferously against these provisions.