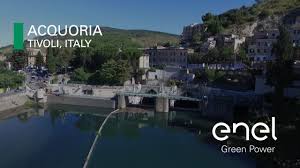 A new permanent interactive exhibition has been inaugurated at the Acquoria hydro plant “to provide an innovative approach to describe how renewable energy is created and to highlight the excellence of the region,” Enel Green Power says. This multimedia experience covers the five sources of clean and renewable energy: hydro, geothermal, wind, marine and solar.

The Interactive Plants project tells the story of energy in an innovative way, by setting up a narrative environment that moves and involves people, Enel says. The journey begins with a spark: energy embedded in each of us. A camera equipped with depth sensors detects the movement of visitors, which is transformed into watts to quantify the energy produced by the body. The tour culminates with a 360-degree projection that explains the operation of the five sources of energy using videos and graphic animations.

“With the Interactive Plants initiative, we want to introduce the world of renewable energy, especially to the new generations, using simple and accessible language that explains the fundamental role they play in the energy transition process,” said Antonio Cammisecra, chief executive officer of Enel Green Power. “The exhibition uses new media technologies to tell the story of the world of energy, emphasizing how innovation and sustainability are core elements of Enel’s industrial development model and key ingredients to strengthen our global leadership.”

Design agency Dotdotdot designed the installation, which “posed the great challenge of communicating intangible content, such as energy, making it tangible and experiential, and of conveying, through Interaction Design, complex topics, such as energy production or its relationship with the geography of the world,” said Laura Dellamotta, co-founder and general manager. “Our experience has enabled us to implement a considerable amount of technological and exhibit design experimentation. The Acquoria power plant project follows that of the Taccani power plant in Trezzo sull’Adda: a scalable installation that can be replicated in other power plants of Enel Green Power.”

In addition to human guides, there will be digital alter-egos or characters of the various types of energy. Hydro for hydroelectric energy, Gaia for geothermal energy, Mariasole for solar energy, Levante for wind energy and Marina for marine energy. At the end of the tour, visitors prove they have become “Energy Ministers” by playing a video game to put into practice what they have learned, choosing the best scenario based on climate, environment and economy to meet the energy demand of a community.

The Acquoria power plant is located on the left bank of the Aniene River in Tivoli, Italy. Two small plants had been built before the current power plant. The first was built in 1884 and aimed at lighting Tivoli, while the second was inaugurated in 1892. During that year, for the first time in the world, alternating current was transmitted at a great distance: from the Acquoria Power Plant Tivoli to the Porta Pia station to illuminate Rome.

In 1902, the new Acquoria plant was built, located at the entrance to the Valle dell’Inferno. The plant was expanded in 1929 by adding three units consisting of Francis turbines and alternator with vertical axis and power of 17 MVA each, powered by the new San Giovanni waterway. The plant produces 154 GWh with the two groups installed on the San Giovanni waterway and 2.9 GWh with a group installed on the Vescovali waterway.

Enel Green Power is the Enel Group’s company that operates in the renewable energy sector. The company has a managed capacity of about 46 GW and a generation mix that includes wind, solar, geothermal and hydroelectric power. EGP is present today in 29 countries on five continents.