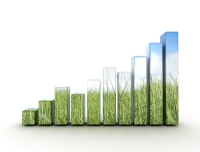 Solar increased by 138.9 percent while wind grew 16.6 percent, geothermal by 9.6 percent, and biomass (i.e., wood, wood-derived fuels, and other biomass) by 1.6 percent. Moreover, since 2007, non-hydro renewables have more than doubled their contribution to the nation’s electrical supply, according to the report.

At the same time (2012 compared to 2011), total net U.S. electrical generation dropped by 1.1 percent with petroleum coke and liquids down by 24.1 percent, coal by 12.5 percent, and nuclear by 2.6 percent. In fact, coal, which only a decade ago provided more than half the nation’s electricity, fell to 37.4 percen percent of net electrical generation while nuclear, for the first time in many years, slipped below 19.0 percent. Conventional hydropower also declined by 13.4 percent due to last year’s drought and lower water flows, but natural gas expanded by 21.4 percent to provide 30.3 percent of net electrical generation.