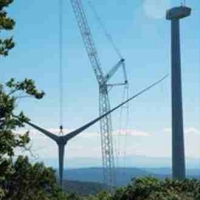 Lexington, Massachusetts [RenewableEnergyWorld.com] In 2007, entrepreneur Steve Kropper formed WindPole Ventures, intending to get into the wind development business. Then came a financially tumultuous 2008, which forced him to dramatically re-evaluate his short-term plan.

As the chaos in the financial markets makes investors more cautious about how to deploy capital, some start-up businesses in the U.S. are finding it difficult to secure financing. The situation, which will probably remain tight through the first half of 2009, is causing entrepreneurs like Kropper to get a bit more conservative in their approach to building a business.

A few years back, Kropper saw an important market opportunity in licensing AT&T microwave towers — originally installed in the 1950s and ’60s for military communication — for possible wind project sites. Being from Massachusetts and witnessing the state’s 5-year legal battle over the proposed 420-MW offshore Cape Wind project, Kropper felt strongly about building a wind business that could avoid similar regulatory nightmares. These towers seemed to be a possible solution.

Many of the 1,200 microwave towers scattered throughout the U.S. are ideal places for small to mid-sized wind projects; the tall structures have long been part of the landscape, they are grid-connected and they have been permitted by key regulatory agencies. While narrowing down the best 350 sites for development over 2007 and the beginning of 2008, the WindPole Ventures team started building relationships with suppliers, developers and large investors. But the frozen debt markets and weakened tax equity market in the second half of last year made finding project finance almost impossible.

“The current crisis has made it unreasonable to raise money for the development process. We originally thought that was a problem. Now we know that we just need to shift our strategy to achieve what we set out to do.”

Wind Pole still plans on working with developers to build out 300 MW of projects. That later-stage process will just be delayed for a year or two. Today the real revenue opportunity for the business comes from selling data it is acquiring from evaluating the sites. Instead of looking for large chunks of project finance, Wind Pole is seeking smaller amounts of venture capital to fund the company’s near-term business strategy.

“We’re practicing the art of the possible,” says Kropper. “It’s still not easy out there, but we’re confident that our scaled-down approach is more attractive to venture investors.”

The venture capital route still seems to be a promising option for many companies. According to figures released earlier this month by the Cleantech Group, 2008 global venture investments in the cleantech sector hit $8.4 billion — a 38% increase over 2007. However, due to last fall’s meltdown in the financial sector, the fourth quarter of 2008 saw a 35% drop in venture capital from Q308 to Q408. That drop was not unexpected given shaky investor confidence.

The first half of 2009 may slow down a bit, but there will be plenty of opportunities for companies looking for funding, says author and entrepreneurial consultant Sramana Mitra. Investors are just being much more careful in their choices, opting to support companies that are further along in the development process.

“For entrepreneurs who have proven concept and have gone through the bootstrapping phase, there is still a lot of money,” says Mitra. “But that doesn’t mean it is easy out there.”

The last few months have certainly not been easy for Massachusetts-based Ocean Renewable Power Company (ORPC). When ORPC started looking for a round of venture capital last July to expand testing of its hydrokinetic turbine, investor interest in the business was very high. That interest came to a standstill around September, says founder and CEO Chris Sauer.

“Things have changed dramatically. There’s a lot of talking, but people are on the sidelines,” he says. “The venture people are like a deer in headlights. All for good reasons — there’s so much uncertainty out there, your natural reaction is to do nothing and that’s actually what they’re doing.”

Indeed, investors may be avoiding earlier-stage companies with high capital needs at the moment. Even though the marine energy industry is a promising one, a company like ORPC will take many years to bring its product to market. Most venture capitalists are looking for opportunities with a faster turnaround. That shift has compromised the once-good investment prospects for companies like ORPC in the short-term.

ORPC is currently relying on large angel investors and capital from two small privately-managed funds. Since December of 2007, the company has been testing its prototype turbine and moving through the permitting process, which has significantly increased the cash-burn rate. Sauer says that the company is spending money as conservatively as possible, trying to hold on until the financial environment improves over the next six months. For now, things will be very tight.

“We began looking for venture capital at a bad time,” says Sauer. “Hopefully when things start moving again, we’ll be able to secure our first venture round. But this won’t be an easy period.”