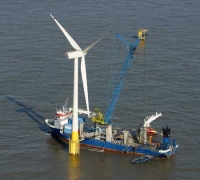 Haarlem, The Netherlands [RenewableEnergyAccess.com] Located 23 kilometers off the Netherlands coastline in the North Sea, the 120-megawatt (MW) Q7 wind farm is already garnering attention and awards — not because construction is ahead of schedule with 42 mono piles already in place — but rather because of the project’s unique financing structure.

The $510 million offshore project, which recently won the prestigious Deal of the Year Award, an initiative of Euromoney in cooperation with Project Finance Magazine, is financed completely by a group of international banks. “Without bank loans we would not have got involved in this project. Although the negotiations on the various agreements were long and tough, the final result is a package that balances the risks and rewards for all those involved: sponsors, contractors and banks,” said Toon Meijers of ENECO Energie. “Q7 demonstrates that limited recourse financing is possible for offshore wind and should help boost the development of similar projects.” Owned and developed by subsidiaries of ENECO, a Dutch energy company, Econcern and Energy Investment Holdings, two Dutch renewable energy developers, the project is being financed on a non-recourse basis. This means that the leading banks involved — Dexia, Rabobank and BNP Paribas — rely solely on the project to generate the revenues needed to service the interest costs and principal repayment of the financing with very limited additional sponsoring support. Another unique aspect is that the financing also covers the construction phase of the wind farm. This has resolved an issue which has bogged down a number of other similar projects in Europe, where contractors have been wary of providing fully wrapped Engineering, Procurement and Construction (EPC) contracts, normally a standard requirement of project finance and sponsors. “Q7 is based on proven technology and an EPC contract with a renowned international offshore contractor (Van Oord group). Rabo was involved at the outset and later joined by Dexia, in a combination that is beyond doubt one of the cornerstones of the project. Both banks are really ‘putting their money where their mouth is’ — they are not only proving that they are taking climate change seriously, but also that they can earn money,” said Dirk Berkhout, a board member of Econcern. The financing structure includes a number of features that lowers the risks associated with the construction and long-term operation of wind turbines in the North Sea. These include: — The availability of a contingent facility to cover potential cost overruns or delays. If it is required, this will be shared 50/50 between the project company and the banks, so the banks fully share the construction risk. — Tailored availability guarantees under the operating contract with Vestas, allowing debt service to continue even during periods when the availability is lower than expected. In addition to the sponsors’ equity, a significant part of the project is financed by loans from Rabo, Dexia and BNP Paribas acting as Mandated Lead Arrangers (MLA). Eksport Kredit Fonden, the Danish export credit agency supported the export of the Vestas turbines by also participating in the financing. The debt financing for the project includes an EU 189 million [US $251 million], 11-year, long-term project finance facility as well as an EU 30 million [US$ 39 million] standby facility to cover contingencies. “Q7 appears to be the financial engineering template for getting funding until lenders become more comfortable with the relatively new offshore technology risk,” said Jaap Groenhof of Energy Investment Holding. Built by Vestas Wind Systems, the Danish wind turbine manufacturer and Van Oord Dredging and Marine Contractors, the Dutch offshore construction contractor under separate construction contracts, the Q7 wind farm will initially be operated by Vestas Offshore, an affiliate of Vestas, under a 5-year warranty, operations and maintenance contract. The 60 Vestas V80-2MW wind turbines will be placed at a depth of 19 to 24 meters. Once completed in March 2008, the wind farm will produce approximately 400 GWh per year.