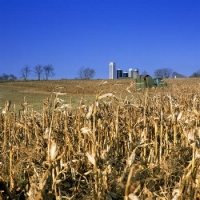 North Carolina, United States [RenewableEnergyWorld.com] To mitigate the release of greenhouse gases, it makes more sense using today’s technology to leave land unfarmed in conservation reserves than to plow it for corn to make biofuel, according to a new Duke University-led study.

“Converting set-asides to corn-ethanol production is an inefficient and expensive greenhouse gas mitigation policy that should not be encouraged until ethanol-production technologies improve,” the study’s authors reported in the March edition of the research journal Ecological Applications.

Still, farmers and producers are already receiving federal subsidies to grow more corn for ethanol under the Energy Independence and Security Act of 2007.

“One of our take-home messages is that conservation programs are currently a cheaper and more efficient greenhouse gas policy for taxpayers than corn-ethanol production,” said biologist Robert Jackson, the Nicholas Professor of Global Environmental Change at Duke’s Nicholas School of the Environment, who led the study.

Making ethanol from corn reduces atmospheric releases of the greenhouse gas carbon dioxide because the CO2 emitted when the ethanol burns is canceled out by the carbon dioxide taken in by the next crop of growing plants, which use it in photosynthesis. But the study notes that some CO2 not counterbalanced by plant carbon uptake gets released when corn is grown and processed for ethanol. Furthermore, ethanol contains only about 70 percent of gasoline’s energy.

The report said that cellulosic species are a better option for curbing emissions than corn because they don’t require annual replowing and planting. In contrast, a single planting of cellulosic species will continue growing and producing for years while trapping more carbon in the soil.

However, the report noted that a cost-effective technology to convert cellulosics to ethanol may be years away. So the Duke team contrasted today’s production practices for corn-based ethanol with what will be possible after the year 2023 for cellulosic-based ethanol.

By analyzing 142 different soil studies, the researchers found that conventional corn farming can remove 30 to 50 percent of the carbon stored in the soil. In contrast, cellulosic ethanol production entails mowing plants as they grow, often on land that is already in conservation reserve. That, their analysis found, can ultimately increase soil carbon levels between 30 to 50 percent instead of reducing them.