The Old Energies like coal and oil have always sought to maximize profits by providing the nation’s energy. They have always believed they were doing well by doing good. Perhaps by 19th century standards, this was true.

Case in point: Offshore wind. It will not mimic an oil industry that has pushed to drill anywhere and everywhere and provide for clean-up only if and when a demand is made. It will not mimic a coal industry that has thrived for centuries at the expense of miners’ lives and the life of the landscape. The offshore wind industry knows that the world’s oceans are precious and irreplaceable and has fully engaged in doing installations only where lengthy and comprehensive environmental impact studies have approved them.

As the EU offshore industry prepares to build 25,000 offshore turbines and obtain 12%-to-16% of its power from them by 2030, Greening Blue Energy: Identifying and managing the biodiversity risks and opportunities of off shore renewable energy, from the International Union for Conservation of Nature, E.ON Climate and Renewables, and the Swedish International Development Cooperation Agency, is a roadmap to do the build out in a respectful manner so that ocean wind can takes its rightful place in an ocean environment sustainably nurturing to its diversity of inhabitants. The U.S. offshore wind and wave energy industries should study this report thoroughly.

The goal is to obtain crucial environmental information ahead of development instead of because of it. ::continue:: 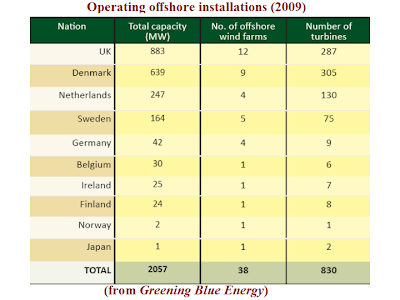 One important finding in the study is that while all the potential impacts have yet to be catalogued, some benefits to marine life are likely: (1) Trawling – said to be among the worst threats to acquatic biodiversity – would be disrupted, if not impeded entirley, in areas of offshore wind installations, protecting threatened fish species. (2) Turbine tower foundations, fixed by boulders, are expected to act as artificial “reefs” where subsurface ocean life can locate and thrive.

The biggest problems with offshore wind installations identified in the study are (1) the noise and other changes during construction and (2) the potential interference with bird and fish migrations. Developers are dealing with the first issue by planning construction during seasons when it will be least disruptive (avoiding mating times, for instance). They are answering the second issue with careful siting.

Final notes: (1) Surprisingly, the U.S. Department of Energy-funded University of Maine DeepC Wind program may be one of the most advanced offshore wind research programs in the world. (2) Ironically, though the BP Gulf oil spill may slow U.S. offshore wind development in the short run, it is likely to advance research in the longer run. 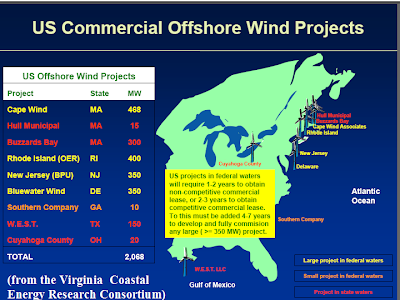