Almost every stock market sector fell significantly in late July and August this year, and such market declines send me searching for value stocks paying good dividends that I can hold for the long-term. In mid-July, I found some decent values by sifting through the trash, but I was less enthused by the value proposition of conglomerates involved in the clean energy space.

Today I’ll take a look at a group of companies you might expect to be good income producers: renewable energy power producers.  These companies operate wind and solar farms, hydroelectric, geothermal, and biomass power plants, as well as cogeneration and recovered heat facilities.

They typically also develop such renewable energy facilities, but here I’ve chosen to focus on the ones that already have significant capacity under operation, as opposed to the ones which are tilted more towards development, because I’m interested in companies that have a chance to produce a significant income stream from dividends.  Although some of these also have regulated utility operations, I’ve chosen to focus on independent power producers because regulated utilities tend to have a high proportion of fossil fuel assets.

The seven companies I’ve found that meet these criteria are:

Below, I have compared the dividend yield, earnings yield, operating and free cash flow (OCF and FCF) yields, as well as equity to debt and equity to price ratios.  The last two ratios have been inverted from their traditional forms (debt/equity and price/book) and scaled by a factor of 10.  I inverted them so that larger numbers would reflect better value as with the other measures, and the scaling makes them easier to compare on the graph. 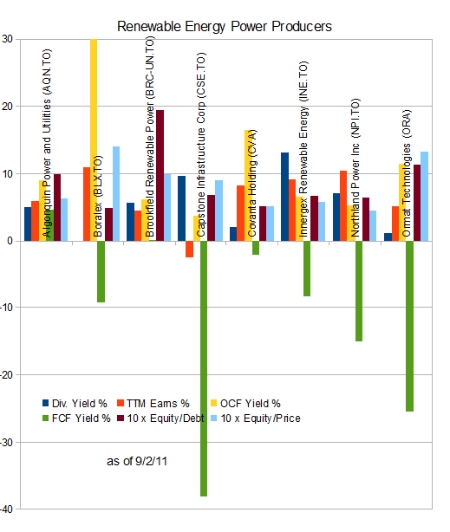 Many of these companies (Boralex, Capstone, Innergex, Northland, and Ormat) exhibit large negative FCF because of heavy investment in new generation facilities. OCF probably gives a better comparison of these companies’ ability to generate cash from existing facilities, while FCF gives a better idea of the companies’ ability to pay dividends without raising additional funds.  Capstone and Innergex’s dividends (9.5 percent and 13.64 percent) seem at first glance too high to be sustainable based on the ratios here, so much more research would be warranted before I would consider investing in either of these.

The Best Options for Income

Investors looking for current income will want to avoid those companies with large negative free cash flow.  Algonquin Power and Brookfield Renewable Power both offer healthy dividends and have strong balance sheets with low debt to equity (high equity/debt) ratios and trade at modest price to book (equity/price) ratios.  Both also seem to have the earnings and cash flow to maintain payouts given the flexibility afforded by their modest use of debt.

Investors looking for value stocks will be attracted to Boralex, with its high earnings yield and a price to book ratio of 0.7, despite the lack of dividend.  Boralex may be somewhat volatile, however, given its relatively heavy use of debt, with more than twice as much debt as equity.

In the absence of retail climate bonds, Algonquin Power and Brookfield Renewable Power look like good options for the income investor wishing to add some clean energy to his or her portfolio, while Boralex deserves further research as a possible value play — so long as the current low price does not turn out to be the product of deeper financial problems.