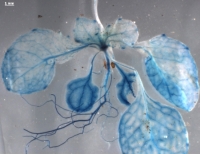 La Jolla, Calif. — Scientists at the Salk Institute for Biological Studies and Iowa State University discovered a family of plant proteins that play a role in the production of seed oils, substances important for animal and human nutrition, biorenewable chemicals and biofuels. 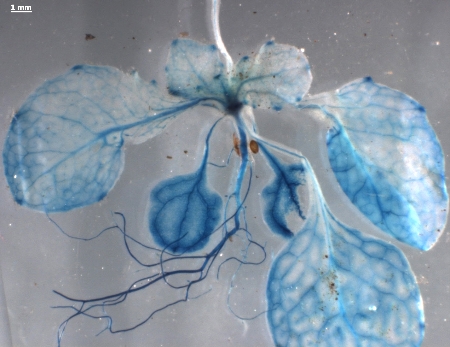 The researchers identified three proteins involved in seed oil production in thale cress plants. This thale cress seedling is shown producing one of the proteins, evidenced by the blue stain on its stems and leaves.

The findings, reported May 13 in Nature, may lead to the development of improved crops yielding higher qualities and quantities of oils, helping to address growing demands for food and fuel and the consequent environmental pressures on the world’s ecosystems.

“This work has major implications for modulating the fatty acid profiles of plants, which is terribly important, not only to sustainable food production and nutrition but now to biorenewable chemicals and fuels,” says Joseph Noel, director of Salk’s Jack H. Skirball Center for Chemical Biology and Proteomics and a Howard Hughes Medical Institute (HHMI) investigator, who led the multidisciplinary study together with Eve Syrkin Wurtele, professor of Genetics, Development and Cell Biology at the Plant Research Institute at Iowa State.

“Because very high-energy molecules such as fatty acids are created in the plant by solar energy,” says Wurtele, “these types of molecules may ultimately provide the most efficient sources for biorenewable products.”

Plant oils are composed primarily of triglycerides, formed by linking together three fatty acid molecules, and are stored mostly in seeds, where they are used for energy during germination. Seeds are crucial sources of oils for nutrition, flavoring and industrial applications, such as the manufacture of soap and cosmetics and for biofuels. With growing concerns about global climate change and petroleum security, producing biofuels for use in transportation and energy generation is a burgeoning industry.

To help address this demand, scientists are unlocking the molecular pathways involved in seed oil metabolism in hopes of finding ways to boost capacity and quality.

In their study, Noel and his collaborators identified three promising genes through analysis of plant genomic data, and then used a variety of techniques, including protein x-ray crystallography, computational biology, biochemistry, mutant plant analysis, metabolomics and gene expression profiling, to functionally characterize the proteins these genes produce.

They found that the proteins, FAP1, FAP2 and FAP3, bind fatty acids, including the major plant omega-3 fatty acid, an important nutritional component found in certain seeds. “They say a picture is worth a thousand words, and that is certainly the case for these FAPs,” says Gordon Louie, an HHMI researcher in Noel’s laboratory, who determined the three-dimensional arrangement of the FAPs holding on to their fatty acid cargo.

This hypothesis was reinforced by showing that the FAP genes are most active in developing seeds, appearing at the same time and location as well-known enzymes involved in fatty acid synthesis. The researchers also found that altering the expression of these genes in a plant leads to changes in the quality and amounts of fatty acids.

“The proteins appear to be crucial missing links in the metabolism of fatty acids in Arabidopsis, and likely serve a similar function in other plant species since we find the same genes spread throughout the plant kingdom,” says Ryan Philippe, a postdoctoral researcher in Noel’s lab.

Micheline Ngaki, a graduate student in Wurtele’s lab, says that if the researchers can understand precisely what role the proteins play in seed oil production, they might be able to modify the proteins’ activity in new plant strains to produce more oil or higher quality oil than current crops.

The researchers’ findings also have implications for evolutionary biology and how large and essential families of enzymes arise from nonenzymatic cousins and are then perfected by evolution.

The ancient ancestors of the proteins the research teams discovered evolved into the enzyme chalcone isomerase, which plays a key role in the production of a group of polyphenols known as flavonoids, compounds that serve a number of functions in plants and are critical for disease prevention in human diets.

“One function of flavonoids is to protect plants from sunlight, which would have been key when plants first emerged from the oceans and lakes to colonize land,” says Noel. “We’ve shown that the very ancient FAP proteins still found in algae and other non-plant organisms acquired chalcone isomerase activity hundreds of millions of years ago, allowing land plants to produce flavonoids for survival in the absence of the protective environment of water.”

The discovery may also help bioengineers focused on creating new enzymes for industrial uses by revealing how nature evolves proteins into chemical machines known as enzymes.

“Nature has been perfecting enzymes for at least three billion years because they carry out the hundreds of thousands of chemical reactions in all organisms, and these reactions are needed by us all to survive and prosper,” says Noel. “We could learn a lot by understanding that three-billion year old experiment.”

Other collaborators on the study include, Ling Li, adjunct professor in the Department of Genetics Development and Cell Biology at Iowa State; Gerard Manning, director of Salk’s Razavi Newman Center for Bioinformatics; and Marianne Bowman, Florence Pojer and Elise Larsen, HHMI researchers in Salk’s Jack H. Skirball Center for Chemical Biology and Proteomics.

The National Science Foundation, National Cancer Institute and HHMI funded the research. Check out the video below that details the research:

Chris Emery is the director of scientific communications at the Salk Institute for Biological Studies.