More
Home Baseload Digging Deeper, Why Renewables are Beating Coal and Gas in Some Parts... 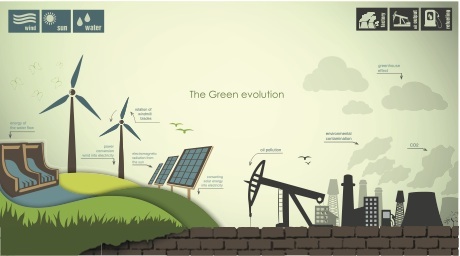 Earlier this month Bloomberg New Energy Finance (BNEF) announced findings that the LCOE for wind and solar is now cheaper than coal and gas in Europe. Further the organization said that it is actually the renewables that are pushing up the LCOE of gas and coal. Because the BNEF analysis is so deep and complex — it uses thousands of data points the company says — the press release that it issued was hard to understand. Here we take a deeper look at the process involved in comparing energy generation technologies to determine exactly why renewables will continue to push out fossils for the foreseeable future.

First, what is LCOE? Short for levelized cost of electricity, LCOE takes all of the factors into producing a megawatt-hour (MWh) of electricity into play. This includes everything from the cost of equipment, labor, permits, etc. to build the plants; the cost of fuel to run them; the cost of operations and maintenance over the lifetime of the plant; and the cost of capital to pay for everything mentioned above. All of these costs, which BNEF derived based on actual deals and projects around the world, were tallied and then divided by the amount of energy the plants will produce (which depends very much on capacity factor) over their lifetime to arrive at a final cost for each and every MWh of electricity that will be produced by the power plant.

It’s a very useful metric for comparing generation technologies in an apple-to-apples format. But what will be most fascinating to energy stakeholders is that renewables are now inching out fossils in some regions of the world.

A look at the chart below (part of a presentation at the BNEF EMEA Summit in London on October 13) offers a deeper look at the BNEF analysis. It shows not only that the LCOE for wind and solar is beating coal and natural gas in some regions of the world, but that other renewable technologies such as geothermal, biomass incineration and small hydro also have very low LCOEs and in many regions are cost competitive or cheaper than fossil or nuclear energy. 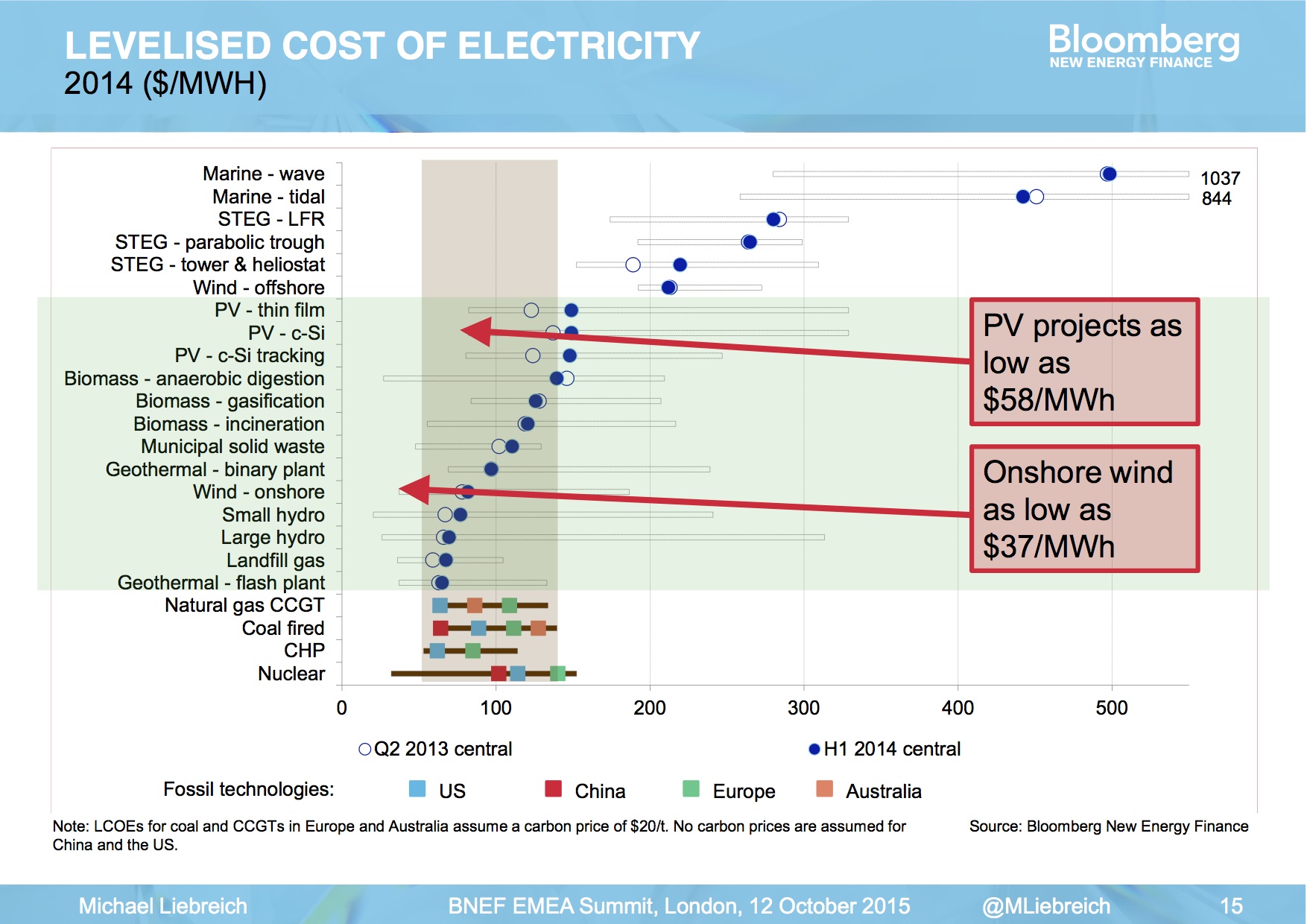 To get down to the nitty-gritty, specifically, the global average LCOE for onshore wind dropped from $85 per megawatt-hour in the first half of the year, to $83 in H2, while that for crystalline silicon PV solar fell from $129 to $122.

Seb Henbest, head of Europe, Middle East and Africa at Bloomberg New Energy Finance, commented: “Our report shows wind and solar power continuing to get cheaper in 2015, helped by cheaper technology but also by lower finance costs. Meanwhile, coal and gas have got more expensive on the back of lower utilization rates, and in Europe, higher carbon price assumptions following passage of the Market Stability Reserve reform.”

Among other low-carbon energy technologies, offshore wind reduced its global average LCOE from $176 per MWh, to $174, but still remains significantly more expensive than wind, solar PV, coal or gas, while biomass incineration saw its levelized cost stay steady at $134 per MWh. Nuclear, like coal and gas, has very different LCOE levels from one region of the world to another, but both the Americas and the Europe, Middle East and Africa region saw increases in levelized costs, to $261 and $158 per MWh respectively.

“But onshore wind and solar PV are both now much more competitive against the established generation technologies than would have seemed possible only five or 10 years ago.”