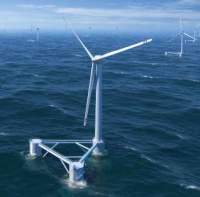 The key to this future source of energy may come from the technology that originated with fossil fuels. The technology that keeps deep-sea oil and gas rigs stable and running may unlock deep-sea wind power as well. Though it is far from proven or even practical testing, the idea is under hot pursuit by entrepreneurs and engineers using principles from oil and gas platform rigs. Challenges ahead lie in permitting, testing and transmission.

Principle Power, a developer of offshore wind projects, has licensed technology from Marine Innovation and Technology, a firm comprised of former oil and gas platform engineers, for development of a semi-submersible floating wind generation system. The patented WindFloat platform is a floating foundation for very large wind turbines that floats on the surface of the water, but is partially submerged.

Intended for use in waters greater than 50-meters deep and ten miles or more from shore, WindFloat’s design is intended to provide physical stability for wind turbines so that existing offshore wind turbines can be used with very few modifications, according to Dominique Roddier of Marine Innovation and Technology.

“There are a lot of synergies between engineering for an oil or gas platform and engineering a platform for wind energy generation,” said Roddier. Namely, deepwater installations for oil, gas, and wind should be stable, cheap and simple. However, while the oil and gas industry is established and has deep expertise in creating floating platforms for energy generation, “we’re making a product in an industry that doesn’t exist yet and we have to create the industry that goes along with the product,” he said.

Roddier, whose background includes designing offshore oil and gas rigs, highlighted the importance of technical peer review when designing and testing new technology along with government involvement, both of which may lead to the creating of “best practices” in this emerging field.

One major engineering difference that must be accounted for is the kind of motion these floating platforms attempt to minimize. In the oil and gas industry, minimizing vertical motion, or heave, is critical because the vertical steel tubes, called “risers” that bring the hydrocarbons from beneath the sea bed to the surface cannot be stretched. Platforms are accordingly engineered to minimize vertical motion, with less attention paid to angular motions.

With wind turbines, however, it is quite the opposite. Minimizing pitch and roll is critical in order for the turbine to function optimally.

This consideration guided Marine Innovation and Technology to create a three-columned triangular design for WindFloats. The turbine is placed on top of one of the columns, and the other two columns are given more ballast to stabilize the entire platform. The ballast from the other two columns stabilizes the weight distribution and allows the turbine to stand upright.

“The stability of the platform is achieved through the columns, which are spread out in order to increase stability and reduce motion,” said Roddier. Furthermore, the WindFloat is moored with 6 lines, 4 of which are connected to the column stabilizing the turbine thus creating an asymmetric design.

Oil and gas platforms also have multiple mooring lines, but the asymmetrical design was chosen in order to support the additional forces placed on the column supporting the wind turbine.

The Case for Offshore Wind Development

Technical challenges aside, numerous advantages exist for large-scale deepwater offshore wind power. First, wind turbines located many miles out into the open ocean reduce the incidence of NIMBY (not in my backyard ) concerns, as they cannot be seen from land.

Second, wind resources are generally higher offshore, particularly in deeper waters. “We’re targeting the Great Lakes, the coast of Maine and New Hampshire and the west coast,” said Alla Weinstein, CEO of Principle Power. Weinstein noted that the company has made some site selections based on an NREL (National Renewable Energy Lab) study that showed areas with significant untapped potential wind power that have previously not been explored due to the difficulty of engineering deepwater wind.

The idea is getting some traction. Oregon-based Tillamook PUD earlier this year issued a request for proposals for wave energy installations. In response, Principle Power submitted a proposal for an offshore wind installation, which resulted in a memorandum of understanding between Principle Power and Tillamook.

Principle Power is planning to launch a project off the coast of Netarts and Garibaldi, Oregon. Extensive stakeholder consultations with those communities are due to begin shortly.

Weinstein expects that Tillamook is just the first of many utilities that may be interested in Principle Power’s technology. States with RPS obligations will be particularly interested, she said. “They have already identified the need and are actively looking for offshore renewable projects,” Weinstein said.

Other Hurdles: Permitting, Not Transmission

Aside from proving the technology, a major hurdle awaiting Principle Power is the application process for a permit to begin the project off of the Oregon coast. The Minerals Management Service (MMS) was given the authority under the EPAct 2005 to grant licenses for deep offshore wind energy development, but will not release the rules for how to develop a project until early 2009. Principle Power’s target installations all take place in federal waters, since they are miles offshore, bringing the projects under the jurisdiction of many different federal agencies.

The process to acquire an OCS Lease Nomination, the permit granting permission to pursue a deepwater wind project, can take up to two years. If there are other applicants for a specific site, MMS grants the application to the team more qualified for what is being proposed and then goes through the same environmental permitting exercise.

Weinstein doesn’t see transmission as an insurmountable obstacle. “Connections to the grid have been done. It’s just a matter of designing it and putting it in place. This is not where the technical challenges are going to be,” she said.

When the system is fully operational, she plans to bring the power from multiple WindFloats to one WindFloat location and then send one cable back to the shore. Furthermore, the transmission issue is addressed in the permitting. “The challenges are going to be in the time that it is going to take us to permit and demonstrate the operation of the WindFloat,” she added.

“We aren’t going to test this in the open ocean until we know that we have something that works,” said Roddier. The company is currently conducting numerical model studies, with tools that have been validated in a wave tank, and will eventually re-test the final design in the lab. Each WindFloat requires site-specific engineering to address differences in water movement at various sites.

Marine Innovation and Technology and Principle Power are working together to ensure integration with the turbine and the float. Although it is still too early for Principle Power to secure deals for turbine supply, each float will is expected to be able to support a 5-MW turbine.

Once they have proven the concept, they plan to reach out to project developers, including utilities and IPPs to develop viable projects. Principle Power is also on the lookout for equity investors with 6-7 year horizons.

Emily Balogh is a contributing writer based in Washington, DC.