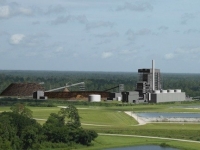 Georgia, USA — In America’s Deep South, where towering loblolly pines cast long shadows and block intermittent winds, one of the best renewable energy resources can still be found in the forest – just take a close look at the trees.

Woody biomass has generated fire-powered energy in the Southeast United States for decades, and it has grown significantly in recent years with development of at least two 100 MW power plants in Florida and East Texas and several multiple-megawatt projects in Alabama, Georgia, Louisiana and North Carolina.

Southeastern utilities have looked to plentiful biomass (the South is a world leading industrial timber producer) to generate the baseload capacity that has eluded solar and wind projects in that region.

“If there’s any baseload renewable in the Southeast, it will be biomass because there’s no geothermal,” said Bob Cleaves of the Biomass Power Association. “There’s some hydro, but solar is still in its infancy, and wind is intermittent here.”

Interest in biomass peaked between 2007 and 2010, when Florida’s then-Governor Charlie Crist and other leaders championed renewable energy. Biomass quickly emerged as a leader, while lawmakers talked of establishing a Renewable Portfolio Standard (RPS).

But the regional RPS never came, and biomass development hit snags with a weak economy and regulatory questions.

“Biomass power is considered high risk by many private equity and debt financiers due to uncertainties around long-term available biomass supply and pricing – both very difficult to control,” said Anne Rahikainen, director of bioenergy services for forest products firm RISI.

RISI analysts say most biomass wood demand (56%) will come from the U.S. Southeast, continuing a boom that raises questions about the capacity for forests to sequester carbon, sustain growth and supply wood without creating price competition between fuel and lumber interests.

Biomass has also come under increased scrutiny by environmentalists and regulatory agencies. Researchers say a complex balance between power plant emissions and sustainable forestry will have to be maintained for biomass to sell itself as a cleaner alternative to coal.

“Biomass is not always carbon neutral, but it can be. There shouldn’t be controversy,” said John Bonitz, Farm Outreach and Policy Advocate for the Southern Alliance for Clean Energy. “We support it because it’s our nearest and best opportunity to replace coal – the biggest threat to the climate in the Southeast.”

Biomass has been a proven regional energy resource for more than 20 years with minimal impact to air quality and the forest landscape, Bonitz said. Since 1991, the 50 MW Craven County Wood Energy plant in North Carolina has generated 350,000 MWh annually via a conventional combustion boiler and steam turbine.

Austin, located in semi-arid Central Texas, about three hours from the East Texas pine forest, has set a goal of meeting 35% of generation with renewables by 2020. Austin Energy leaders said biomass electricity from the edge of the Southeast’s pine forest won’t be as expensive to transport as wind energy from the deserts of West Texas, which provides the utility with most vast majority of its renewable energy.

“We are more interested in meeting our renewable energy goals and reducing our carbon dioxide emissions,” said Austin Energy spokesman Carlos Cordova. “This project helps us do that.”

Construction on the Nacogdoches site has begun, and the project has received community support in Austin and East Texas, Cordova said.

In December, the State of Florida issued final permits for the 100 MW Gainesville Renewable Energy Center (GREC). It will use waste wood from timber companies and municipal sources to provide power 24 hours a day, seven days a week. Construction on a 130-acre site is set to begin this spring, pending a last-minute challenge before the Florida Supreme Court by activists concerned with air pollution and costs.

“We’re familiar with their arguments, but we don’t think they have much in the way of legs,” said Ed Regan, Assistant General Manager for Strategic Planning at Gainesville Regional Utilities (GRU).

GREC developer American Renewables will burn woody biomass to generate power and sell it to GRU via a fixed, 30-year Power Purchase Agreement. Regan said the project could create 700 jobs and offer the Gainesville area baseload power with a capacity factor of 90%, according to the company, compared to the local utility’s 17% for its 7.5 MW solar portfolio. Fuel for the biomass plant will be transported from multiple timber facilities and brush sites within 75 miles.

The GREC development began six years ago when activists opposed a new coal plant. The biomass alternative gained significant support from community leaders, but questions about carbon emissions eventually created a rift in the local Sierra Club. A former chapter leader resigned after fellow members decided to oppose the GREC as the Club’s national office joined other groups in opposing biomass power.

“The American people know that clean energy does not come out of a smokestack,” said Margaret Sheehan, an attorney with the New England-based Biomass Accountability Project. “Biomass electricity poses an unacceptable risk to the public’s health by increasing air pollution.”

Sheehan has worked with a small group of Floridians to fight the Gainsville plant, but the GREC’s supporters, including environmentalists and scientists, say they far outnumber opponents.

The GREC received multiple endorsements, including approval from the Southern Alliance for Clean Energy and James Hansen, Columbia University environmental scientist and director of NASA’s Goddard Institute for Space Studies. He said in a Gainesville Sun interview that biomass power plants “are helpful for the task of phasing coal-fired power plants.”

Central to biomass’ American future are questions about the net impact to climate and whether the U.S. Environmental Protection Agency (EPA) and states will classify power plants as carbon neutral. The EPA decided to table those concerns for three years when it announced in January a three-year deferral on Greenhouse Gas (GHG) permitting requirements.

That offered some relief to utilities and developers that had already invested millions in development and construction, but it wasn’t enough to convince other early stage projects. Citing “regulatory uncertainty,” Oglethorpe Power on Feb. 11 suspended plans for up to three 100 MW power plants it had developed in Georgia since 2008.

Furthering hope for the industry was the EPA’s Feb. 23 release of Maximum Achievable Control Technology (MACT) standards exempting biomass boilers from installing scrubbers for mercury and hydrogen chloride. The MACT also states small biomass power plants will not have to meet emissions standards, though large plants will be subject to limits for certain pollutants.

The EPA Pacific Southwest Office’s recent fining of two California biomass power plants for emissions violations related to nitrous oxides and other non-GHG pollutants shows that the industry will not necessarily be immune from fines for violations, however.

“We wanted to send the message that biomass can be an alternative to coal, but it still has to comply with the Clean Air Act,” said Margot Perez-Sullivan, spokeswoman for the EPA’s Pacific Southwest office.

Proponents say CO2 released from burning biomass does not contribute to global warming in the long run because new forest growth ultimately absorbs carbon, cancelling out the emissions. In the Southeast, where pines grow fast, this argument has merit, Bonitz said. But in the north, where forests grow slowly, researchers have urged caution in selling carbon neutrality, especially for facilities that chip and burn whole trees instead of waste wood.

“We should make sure a carbon life cycle analysis is performed and adhere to science with good policies,” Bonitz said.

The Sierra Club has expressed concern that all the promises for sustainable forestry and use of waste wood will fall by the wayside as competition for feedstock increases. This issue arose when Duke Energy successfully lobbied the North Carolina Utilities Commission to classify wood chips from whole trees, although low-grade, as feedstock eligible for renewable energy credits.

Also fueling the biomass debate was last year’s controversial “Biomass Sustainability and Carbon Policy Study” by the Manomet Center for Conservation. It concluded that greenhouse gas emissions from biomass can be greater per unit of energy than fossil fuel.

The study’s authors later clarified the report, saying, among other things, that it did not consider wood waste as fuel or factor potential for combined heat and power systems.

In spite of all the controversies and uncertainties, Gainesville’s 100 MW project developers are hopeful they can soon begin construction on the GREC and other Southeast biomass power plants.

“The devil’s in the details when it comes to biomass,” said American Renewable’s Levine. “Solar and wind energy are pretty straight forward with few side effects, but science shows biomass can still displace quite a bit of carbon from the atmosphere.”