Obama’s reelection did not bring on a new bull market for clean energy stocks, as some had hoped. My clean energy model portfolio was flat (+0.4%) for the month, while the widely held Powershares Wilderhill clean energy ETF (PBW) fell 1.6%. In contrast, the broad market, as measured by the Russell 2000 ETF, (IWM) rose 1.1%.

What the Election Brought to Energy Stocks

If Obama’s re-election had a strong effect on any energy sector, it was coal stocks: the Market Vectors Coal ETF (KOL) was down 8.5% over the same period.  The market seems to be saying that the Republican-controlled House will be able to block any significant legislation which might favor clean energy, but Obama’s re-election will allow the EPA to continue its efforts to tighten emissions regulations in power generation.  Such regulations force power plants to bear more of the costs of the pollution they produce, and make burning dirty fuels like coal less attractive.

For details on the performance of my individual picks, see the chart and discussion below. 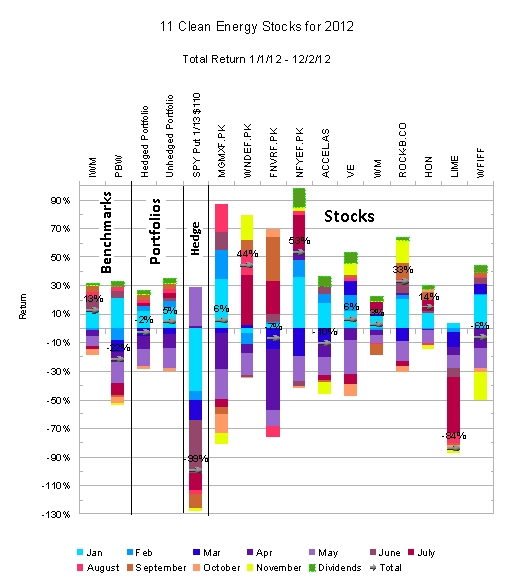 Among the significant movers in the model portfolio this month were Waterfurnace Renewable Energy (TSX:WFI / OTC:WFIFF), which announced disappointing third quarter results of 24 cents per share, compared to 38 cents in 2011.  The company attributed the poor results to low natural gas an propane prices.  The stock fell 19%, bringing the yield over 7% at the current stock price of C$13.60.  Since I think current low prices in natural gas and natural gas liquids are unsustainable, with drillers unable to recover their full costs at these prices, I’ve added to my position in the company.

Western Wind Energy (TSX-V:WND / OTC: WNDEF) rose 17% on the news that Brookfield Renewable Energy Partners (TSX:BRP.UN, OTC: BRPFF) had made a C$2.50 cash offer for the company, outside Western Wind’s organized bidding process.  This led Western Wind to comment that it had received multiple expressions of interest from parties involved in the process indicating a willingness to pay considerably more than C$2.50, and pushed the stock into the high C$2.70 range.  The company then got an additional boost from the announcement of a supplemental cash grant payment of $4,132,980 (6 cents a share.)  This supplemental grant is the result of Western Wind’s perseverance in discussions with the US Treasury over the reduced award on its 1603 cash grant for its Windstar project.  While the supplemental grant only makes up for a third of the $12.2 million shortfall, I was pleasantly surprised that they received anything more, despite the fact that management has never wavered in their belief that additional money would be forthcoming.

Accell Group (Amsterdam:ACCEL) fell 9%, on the announcement that the company expects 2012 profits despite organic sales growth.  Company CEO Ren Takens attributes lower profits to the costs of integrating the recent Raleigh and Diamondback acquisitions, with limited synergies expected this year.  Takens expects positive synergies to emerge from the acquisitions over the longer term.

Finavera Wind Energy (TSX:FVR, OTC:FNVRF) was flat, after falling early in the month, and then receiving a strong boost when the company announced it had received initial offers from four companies in its sale process.  The offers are currently being reviewed by Finavera’s M&A advisory firm.

Lime Energy (NASD:LIME) continued its slide, falling another 3% after delaying its third quarter results because of its ongoing investigation into previously disclosed accounting problems.

Alterra Power (TSX:AXY / OTC: MGMXF) fell 7% without significant news. Analyst John McIlveen says this company “has a number of events that could make it a very interesting story” but investors are not yet paying attention.

Looking forward to the end of the year, it seems almost certain that my model portfolio will once again outperform its clean energy index.  Chances of outperforming the broad market seem slim, but I would not be surprised if the gap narrows significantly on more buyout news from Western Wind or Finavera.