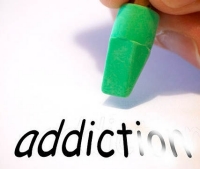 Maine Depends on Oil to its Economic Detriment

Recent data from the U.S. Census shows that 75.61% of Maine’s homes use #2 heating oil.  This is by far the highest proportion of heating oil dependency of any state.  The table below shows this fact and also shows that Maine has very limited access to natural gas (3.68% of homes).

Because of these states’ heavy reliance on heating oil, these states are the most petroleum dependent states in the United States (with the exception of Hawaii).  See Figure 2, below. 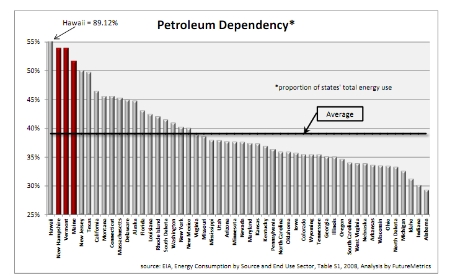 Maine “exports” about $720,000,000 per year in what I call our “oil tax” because Maine homes use about 300 million gallons per year of heating oil and, according to the EIA’s Home Heating Oil Report for 2010, 78% of every dollar spent on heating oil leaves the Maine economy.  If that money were to stay in the Maine economy it would produce about 41,000 new jobs that do not currently exist.

(Note: 41,000 jobs is based on an average annual pay and benefits of $37,000 and multiplier effects estimated by FutureMetrics.  Job multipliers are based on detailed multiplier tables, by state, from the National Renewable Energy Laboratory, The Jobs and Economic Development Impact (JEDI) Model, revised in 2009.  The multipliers’ aggregate increase in final demand is also modified by an assumed 35% tax rate.  The median income of $37,000 is from the US Census, 2008.  The 35% tax rate is an assumption that includes all taxes that reduce consumption (including but not limited to real estate, sales, income, and excise taxes. This job number does not include any new jobs created by the production of regionally produced fuel such as wood pellets.)

It’s important to consider where heating oil prices will be in 3 to 5 years so that Maine and its neighboring states can plan to mitigate the current and potential negative economic impacts that accrue from this addiction to heating oil.

Forecasting energy prices with any precision is impossible.  However, trends in price movements over time can be estimated.

The relationship between economic growth and oil prices can be used to estimate future price trends.  Based on expected growth rates for global gross economic product, FutureMetrics has estimated the expected crude oil price from 1999 to 2015.  The chart below, which is difficult to read on this site, shows that expected prices will increase to at least $175 per barrel by November 2014. 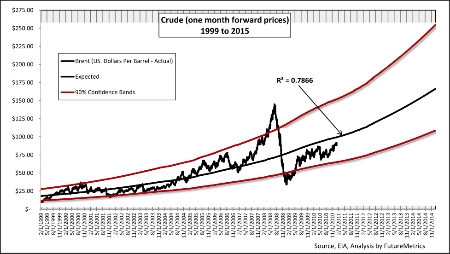 What is the Effect of Higher Heating Oil Prices on Maine and the Region?

Jobs and businesses will suffer; but so will the governments of these states.  The loss of more than 20,000 jobs in Maine will lower tax revenues.  The state of Maine averages about $5,200 in total tax income per employed resident, according to the Maine Department of Labor and the Maine Budget Office.

The loss of 20,700 jobs would lower tax revenues and that loss would reduce state tax revenue by almost $106 million annually.  That is a 3.21% drop in annual tax revenues.  At the same time, the demand for services would increase as the increase in heating oil costs disproportionally burdens the poor.

Can the Region Transition off of Heating Oil?

There is a solution to the problem that can not only lower heating costs dramatically but can also eliminate the dependence on heating oil; and that solution can also keep the money spent on fuel in the local economy and stop our exporting hundreds of millions of dollars and destroying tens of thousands of jobs.  The solution is to use fuel from our own forests and from dedicated energy crops grown on fallow land.

Maine is the most forested state in the United States and Maine sustainably harvests more than 16 million tons per year of wood from its forests (PDF).  New Hampshire and Vermont have less forested land but Vermont has enough non-cultivated cropland that is idle from the decline of the dairy farm sector to grow more than 1.5 million tons per year of woody biomass from dedicated fuel crops.  For more on the topic of land availability, see the sidebar at the bottom of this article.

The residential wood pellet fueled boiler experience in Europe can guide Maine and its sister states away from their dependence on heating oil.  Pellet fueled boilers are different than pellet stoves.  They are fully automatic (fuel and ash handling) and comparable to any modern home heating system for emissions.  Whereas most homes in the U.S. that use pellets have stoves, most homes in Europe that use pellets have boilers.

Pellet fuel is also much cheaper than heating oil and propane.

The potential advantages of harnessing the region’s woody biomass fuel potential for heating homes and businesses are many; but job creation tops the list.  Tens of thousands of jobs will be created by making the fuel locally, using cheaper fuel, and by eliminating the heating “oil tax.”

The net effect of converting 75% of homes that use heating oil to modern European style pellet boilers would be to create or sustain 79,000 jobs in Maine and almost 147,000 jobs in the three states most addicted to heating oil  (based on heating oil at $4.50 per gallon).

We are facing a crisis in our region due to our addiction to heating oil.  We saw a preview of this crisis in 2008 but, as with most addictions, pain is quickly forgotten and denial immediately takes over.

The benefits of converting a significant number of homes from heating with oil to heating with pellets are significant.  The risks to our economy if we do not convert are also significant.  Can we afford to sit on our hands and hope that oil prices won’t rise?

Inaction can only be a product of denial.  Prices will rise.

Sidebar: Is there Enough Land?

While an important share of the non-cultivated cropland in the northern New England region produces hay that is necessary for livestock agriculture, and some of the pasture supports pasture-based beef and dairy production, as well as the equine industry, a significant part of both these land categories is used only lightly, frequently only mowed every year or two to keep it open.   Assuming that 25% the non-cultivated cropland and pasture is converted to energy crops, and assuming that the average yield per acre is 4 dry tons per year, the table below shows the potential for additional feedstock (assuming 50% moisture to convert from green to dry tons).

Data is from the National Resources Inventory, managed by USDA’s Natural Resource Conservation Service.  Data is derived from a statistical sample of plots of land, based on observation of land cover from satellite and ground data.)

The article is an excerpt from a longer article that is available for download here.