For bio-based industry, beyond the Valley of Death lies the Valley of Dearth, a shortfall in capital necessary to finance global deployment at scale. A global OPIC can bring institutional investors to the rescue, say top capital strategists in New York.

Michael Eckhart, the Global Head of Environmental Finance & Sustainability for Citigroup, doesn’t hang around much on the conference circuit. In fact, the busy financier himself can’t remember the last time he spent three days as a conference delegate, just taking in information. So when he came to ABLC last week, I took a chair and started making notes, fast.

You see, in project financings of $1B and up, Citigroup did all of them last year. When it comes to large-scale project debt financing of the type that bioenergy is turning to for at-scale deployments, they are not the elephant in the room. They are the room in the room.

The good news? According to Eckhart, renewables remain a popular component in project bond financing. Quoting Dealogic, Eckhart told ABLC delegates that fully 12 percent of all global project finance debt issued in 2011 was for renewables. Oil & gas projects, which are generally assumed to take all of the oxygen out of the room, clocks in at 22 percent.

Nothing to sneeze at, but Eckhart points out a salient fact. The global equities market is $45 trillion and the global debt market is $90 trillion. When you are chasing a pie consisting of $16 billion out of $135 trillion (that’s 0.01 percent) something is wrong with the risks and rewards structured into your offer. That’s Eckhart’s conclusion.

“What we need here is a new approach to the market,” he concluded, referring to renewables.

Let’s put Eckhart’s challenge another way. To convert 30 percent of the oil economy to renewable fuels and chemicals, would require roughly $2.88 trillion (constructing 360 billion gallons of capacity, at an average of $8 per gallon, using advanced biofuels technologies).

Now, if renewables are attracting 12 percent of the project finance debt market, that’s around $41 billion per year. At those rates, it would take 70 years to add all that capacity — a completely fanciful figure, anyway, because that new capacity would be obsolete within 30 years or so, and you could never build out all that capacity if it took you 70 years to raise the money, the fleet of capacity would be rusting over before you got a fraction of the build-out done.

Without a change in approach, that is.

Because 12 percent of the total debt market is $11 trillion, enough to replace the entire fossil fuel capacity with bio-based renewables (if you could secure an earth’s worth of feedstock), in about four months worth of deal flow. You couldn’t even build them as fast as the global market can finance them. That’s how liquid the markets are. So liquid, they make gasoline seem like a solid.

So, beyond the Valley of Death, where projects have trouble attracting capital for first commercial executions, there is still the Valley of Dearth, an overall structural capital shortage for project finance. Better structure, a rebalancing of risk and reward, is what is needed.

In his presentation at ABLC, Eckhart looked at several options, with a goal of increasing the share of debt that goes to biofuels and renewables as a whole. 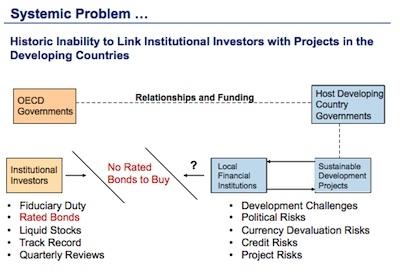 Those are: political risks, currency devaluation risks, project risks, and the compounded effect is that there are no rated bonds to buy. Now, institutional investors have fiduciary duties, and invest only in rated bonds, liquid stocks, and require a track record. The gap between the projects and the market — that’s the risk gap that keeps us investing in “more of the same” as opposed to “change you can believe in.”

One approach, Eckhart said, that provides a solution is the Collateralized Debt Obligation, or CDO.  These acquired a bad reputation in the midst of the global financial crisis, when they became associated with the mortgage crisis — packagers of bad home loans used a similar structure. But there’s nothing wrong with the vehicle itself — so long as the underlying projects have a higher quality than the junk mortgages that were thrown into these vehicles during the build-up to the crisis of 2008.

Special Purpose Vehicles (SPVs) for investment are created in a CDO. Generally, there are 25 to 100 loans in a fund, and the fund itself has $100 million to $1 billion in overall loans. The fund is over-collateralized and divided into multiple classes, or tranches. The senior classes are the safest securities, and offer the lowest returns, while the junior teaches offer the highest interest rates (coupon payments) or have the lowest purchase prices, in order to compensate for the elevated risk.

The key to making the CDO work is the track record and role of the arranger, generally investment banks, and the asset managers who maintain the credit quality of the CDO portfolio via trading, and also work to maximize recovery rates for the underlying projects that experience default.

One, they have the stink of the financial crisis on them — primarily from the high ratings that continued to be placed on mortgage-backed securities even when sub-prime mortgages soared from an average of 5 percent to 36 percent of the portfolios. Also, a number of influential voices in the financial market, among them Warren Buffet, came to believe that CDOs concentrate risk and uncertainty, rather than diversify it, by obscuring potential problems in the underlying portfolio.

Two, CDOs, even at their height, reached $180 billion per quarter in new issuances — enough to spark the global financial crisis and a gargantuan bailout of institutions paid by the American taxpayer and U.S. debt — but just a few percentage points of the overall debt and equity markets. 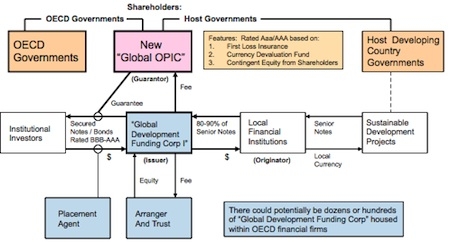 The bottom line is offsetting risk, and in his presentation, Eckhart proposed a Global OPIC, to provide debt guarantees and insurances for sustainable development. OPIC is the Overseas Private Investment Corporation, an arm of the US government that has provided more than $200 billion in project finance for 4,000 projects and generated $74 billion in US exports. It provides financing guarantees, political risk insurance, and makes both direct loans to small and medium-sized enterprises as well as support for private equity operating in emerging markets.

In the Global OPIC that Eckhart envisioned, the shareholders in the fund would include both OECD and developing countries. The Global OPIC itself would have a Aaa to AAA, based on a combination of first loss insurance, a currency devaluation fund, and a fund of contingent equity from shareholders. It would operate as a guarantor of projects.

In the proposal, sustainable development projects would issue senior notes in local currencies, in debt offers originated by local financial institutions. A portion of the senior notes would be taken up by individual Global Development Funding Corporations (and there could be dozens or even hundreds of these units, housed within OECD financial firms). The GDFCs would in turn issue secured notes and bonds, guaranteed by the Global OPIC, and rated in the BBB-AAA range because of the underlying financial strength of the Global OPIC itself. These notes and bonds could in turn be purchased by institutional investors.

Sophisticated stuff, but well-structured, innovative, and well worth pursuing as an opportunity to connect capital with projects that the future will need.

Chances for a Global OPIC? We’ll continue to explore that in the Digest.

If a Global OPIC proves the right vehicle, and it certainly looks right at a high level, establishment in this decade is a must. That will provide a structure for the scale-up financing that will be required in the 2020s for all the project flow that will come from the technology build-up that is occurring right now, particularly in the US and EU — bio-based technologies that will need a home in there bioenergy zones, much of that in emerging markets.

That should be a priority for the Rio+20 process, the Global Green Growth Forum, not to mention the climate change process as well as sector groups such as the Global Bioenergy Partnership. We’ll keep you posted on efforts to connect those groups with this credible approach to scale-up finance.