New Hampshire, USA — Knowledge has always been power, but how that information is stored has emerged as one of the most challenging issues facing the evolution of technology.

We’re connected digitally as never before and the ubiquitous nature of smartphones and tablets only means that the ability to access and share information must become cheaper and faster. This shift in how we seamlessly integrate technology is the byproduct of a cloud computing revolution that’s been led by some of the biggest names in technology, companies like Google, Apple and Facebook.

Consumers may associate these companies with their headquarters in places like Silicon Valley. But the world’s computing power is churned out in monolithic data centers spread  across the globe. Some of these sprawling complexes consume enough energy to power a small city. And their meteoric rise in importance has mostly been fueled with sources like coal and nuclear power.

That’s the finding of a Greenpeace report that takes a closer look at the impact of cloud computing and the energy requirements that come with it. (Yes, this report was the kickoff for a series of high-profile protests meant to shame many of the companies cited.) Even as most IT and data-centric companies tout their green credentials, the reality is that few are making transparent efforts to bring their energy consumption in line with their public stances. However, the report also lists some of the success stories and some of the companies that are assuming a leadership role in adopting renewables.

The report finds that three of the largest companies that have built their futures on cloud computing have done relatively little to make renewable sources a vital part of their future. Amazon, Apple and Microsoft each rely heavily on fossil fuels. Many others, including HP, IBM, Oracle and Twitter, don’t fare much better.

According to the report, Amazon “does not appear to have made any purchases or investments in renewable electricity for its facilities.” Apple, meanwhile, has planned for onsite renewable generation at its new iCloud data center in Maiden, N.C. But that investment will power only 10 percent of the center. As for Microsoft, the report’s authors argue that the company has failed to use its buying power or its lobbying prestige to force change.

While it’d be easy to say that many companies are merely choosing fossil fuels over renewable sources, it’s also a reality that they’re choosing to cluster their location in places where coal and nuclear already dominate. Their very presence is spurring growth in these two sectors and the companies are gobbling up the cheapest alternative in order to feed the bottom line. Rather than becoming catalysts that drive utilities and governments toward cleaner renewable sources, they’re helping to perpetuate the use of fossil fuels. And the more the companies build up their presence in clusters, the more the local economies become dependent on nonrenewable sources. At that point, change becomes virtually impossible in the short-term.

Some companies, though, are striving to build their energy futures on renewable sources. Google, Yahoo and Facebook are the three giants that are taking the biggest leap in this regard, and other smaller companies are making even bigger wholesale changes.

Google has made headlines as a key investor in renewable technology, but it’s also become an innovator of how to use that technology to power its own business. Google recently entered into two 20-year power purchase agreements for more than 100 megawatts from a wind energy developer in Iowa and Oklahoma, states where the company operates large data centers. Google has also launched Google Energy, a subsidiary that allows it to act like a utility that can buy and sell electricity onto the grid.

Yahoo and Facebook have made strides by choosing to locate to sites where they could secure large amounts of existing hydro power. Yahoo set up a data center in Lockport, N.Y., and Facebook built an operation in Lulea, Sweden.

And in Iceland, where nearly 100 percent of electricity comes from geothermal and hydro, Greenqloud — a small company that bills itself as a green competitor to Amazon Web Services — established a data center on a former NATO Air Force base. Iceland, hailed for its renewable sources and its fast connection times to the U.S. and Europe, sees itself becoming a major player in cloud computing. 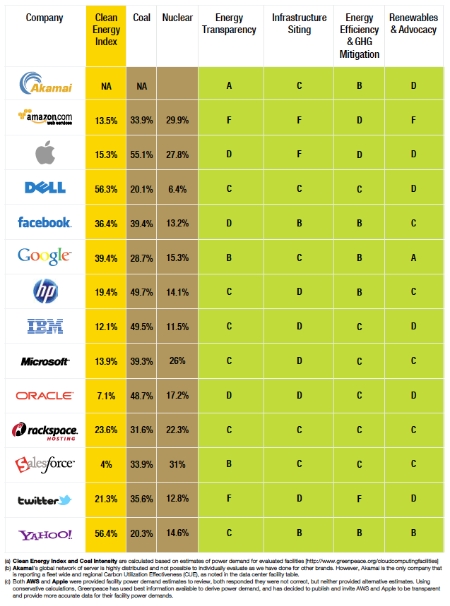