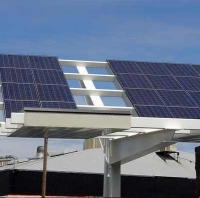 Intel Corp has long strived to reduce its carbon footprint. Now, by buying renewable energy credits — purchases that guarantee the generation of wind, solar and geothermal electricity — it is stepping up the pace. It’s all part of corporate America’s attempt to neutralize their carbon emissions.

Many companies are being proactive, reasoning that it is healthy for both the environment and business. Indeed, the pressure to address global warming has influenced the public and private sectors to come up with solutions — not just feel-good ideas but ones that cut emissions using the latest technologies and market-based strategies.

“This is one milestone in our long-term strategy to help create a business environment where renewable energy is more economically feasible and therefore, the choice alternative for individuals and businesses,” says Marty Sedler, director of global utilities for Intel in Arizona. In the case of Intel, it has made the largest single voluntary purchase of renewable energy credits ever, representing 1.3 million megawatt-hours (MWh) of electricity. This transaction is like taking 185,000 passenger vehicles per year off the road. Or, stated differently, the company has purchased enough electricity to power more than 130,000 average American homes annually, all according to the U.S. Environmental Protection Agency.

A study by EcoSecurities and ClimateBiz surveyed 65 multinational corporations and found that 43 percent of them had already implemented an existing carbon management strategy, with another 34 percent of those organizations saying that they are in the process of developing one. When asked what types of carbon offsets they preferred, nearly all of them said such energy efficiency measures as insulation and changing light bulbs are the easiest to implement. They also referenced the buying of renewable energy and the capping of landfill projects.

Taking steps to become more energy efficient is one way to reduce carbon footprints. Buying carbon offsets and renewable energy credits is another. The goal is to make drastic cuts in heat-trapping emissions. Businesses could choose, for instance, to place a tent over their landfills and then funnel their methane emissions to a central outlet.

Companies such as New York-based Hess Corp. are then selling credits to those commercial and industrial companies that want to participate. “If you are a business supplying a product to me, I need to see what you are doing to make yourself greener. These companies may be seeing pressure from their customers and their suppliers, or they may be acting because they see legislation on the horizon,” says John Deese, manager of new product development for Hess Energy Marketing.

But a challenge that Hess and others now face is verifying the authenticity of the credits that they sell. In other words, buyers must not only be able to accurately measure and value their carbon emissions but they also need to know that their credits are being dedicated solely to their operations — and not recycled back into the marketplace.

To this end, the businesses that buy and sell emissions credits can have their enterprises given the stamp of approval by outside auditors. Consider Hess, which calculates its customers’ carbon emissions and then purchases the necessary offsets: Its offering has met the standards set by the Center for Resource Solution’s Green-e program that vouches for the credits it offers.

According to the center, the growth in the voluntary credits market is a strong indication that electricity consumers want more of their power to be generated by renewable energy and that they are willing to pay a small premium for such guarantees. The purchase of certified credits and offsets further stimulates this market, it adds, ensuring that more green energy projects get built.

The center estimates that compliance markets account for two-thirds of the credits sold while voluntary ones make up the rest. Of that voluntary segment, it says that it validates about 60 percent of the credits sold. Altogether, it says that roughly 260,000 residential customers and 10,000 commercial customers across the United States and Canada purchased Green-e Energy Certified renewable energy.

While Intel topped the list this year, PepsiCo was the biggest patron of renewable energy certificates in 2007, the EPA says. It had a total purchase of over 1.1 million MWh, representing 100 percent of its total electricity use.

“Our mantra is transparency,” says Jeff Swenerton, communications director for the Center for Resource Solutions in San Francisco. “We make sure utilities as well as carbon offset providers and the independent renewable energy credit sellers open up their books to independent auditors. We monitor the chain of custody for these offsets and certificates until they get to customers. They are then retired. Customers rely on us to ensure they are getting what they have paid for.”

With pressure mounting to do something, other companies such as Cisco, DuPont, Honda, Johnson & Johnson, Kodak and Wells Fargo are keeping tabs on their emissions and are promising to make significant cuts in them. All are part of EPA’s effort to cut greenhouse gas emissions. To succeed, the agency says that they are using a combination of renewable energy certificates, on-site generation and utility green power products.

U.S.-based businesses are leading the charge in the effort to curb heat-trapping emissions. Through the use of offsets and credits, many of them are facilitating the use of green energy and thereby reducing the nation’s carbon footprint. In the process, they are endearing themselves to the broader public and perhaps to state and federal agencies that may soon mandate cuts in greenhouse gases.