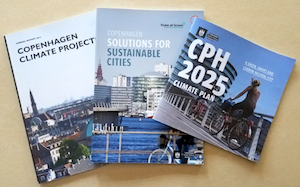 Copenhagen, Denmark—How does a major European capital wean itself from fossil fuels and reinvent itself as a sustainable city? Having already cut its CO2 emissions by 38 percent since 2005, Copenhagen is in the process of finding out.

The 2025 Climate Plan focuses on energy efficiency, renewable energy production, green mobility, and exemplary use of energy by city government. Setting carbon-reduction goals for each area, the plan then shows, area by area and project by project, how the activities will reduce CO2.

Through energy efficiency improvements in the city’s building stock, Copenhagen plans to reduce heat and electricity consumption by 20 percent in commercial buildings and by 10 percent in households. To do so, the city is enforcing stricter environmental building codes and requiring green building methods for new construction.

Copenhagen is using wind and other renewables to reduce emissions. Since the climate plan went into effect, the city-owned Greater Copenhagen Utility (HOFOR) has installed 17 onshore wind turbines (44 MW of electric power capacity). Three 2-MW wind turbines were erected at Prǿvestenen in the port of Copenhagen and supply power to 3,400 households. 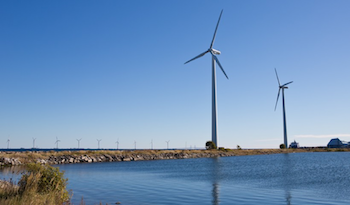 The Danish government is working to make Denmark a “low-emission” country independent of fossil fuels by 2050. Bottom of Form

Copenhagen intends to separate the plastic in its organic waste stream, and then “biogasify” the remaining organic waste by converting it to methane. The recovered plastic will then be recycled, and the gas fired for heating or compressed and used to fuel heavy trucks.

The city’s sewage treatment plants capture biogas from household wastewater, filter the biogas to remove ammonia and sulfides, and then mix the biogas with air and natural gas to produce “town gas.” Almost one third of gas used for cooking in Copenhagen is now biogas.

About three-quarters of the CO2 reduction under the climate plan is to come from converting power and heat production from coal to wind, biomass, geothermal energy, and waste. For example, the shift of Copenhagen’s power plants at Amager and Avedǿre from coal to biomass will make the city’s district heating carbon neutral.

In addition, the city is investigating the use of geothermal heat, heat pumps, and solar process heat to augment the municipal heating system.

By 2025, the climate plan calls for 75 percent of all trips in Copenhagen to be taken by foot, bicycle, or public transit, with half of all trips to work or school using bicycles.

The city is investing heavily to make Copenhagen the world’s best city for cyclists by adding new bikeways and encouraging companies to support the use of electric bikes. Charging docks for the latter will be available citywide through Copenhagen’s bike-share program. 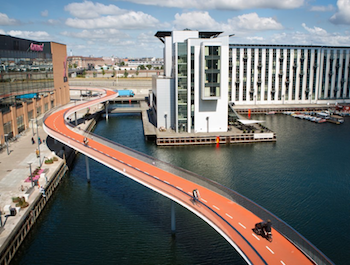 Service improvements, such as dedicated bus lanes, are planned to increase public transit ridership 20 percent by 2025, while making public transit carbon neutral. Meanwhile, the city is trying to ensure that 20 to 30 percent of light vehicles and 30 to 40 percent of heavy vehicles, regardless of ownership, operate on electricity, biogas, bioethanol, or hydrogen. More electric charging and hydrogen filling stations will be set up, and the city will endeavor to promote and subsidize the sale of electric and hydrogen vehicles. 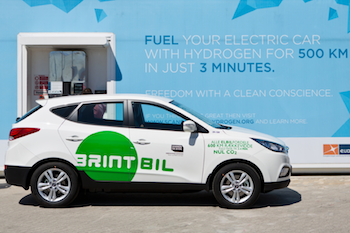 Eventually, all municipal government vehicles will operate using clean energy, such as electricity, hydrogen, or biofuels, and external suppliers will also have to use renewable energy–powered vehicles when driving for the city.

Exemplary Use of Energy by City Government

The Municipality of Copenhagen is planning to cut energy consumption in its buildings by 40 percent before 2025, and half of the carbon emission reductions from the city’s overall emission- reduction efforts will come from energy efficiency improvements to city buildings. Whenever redevelopment or new development is planned, the city tries to foster low-energy, mixed-use neighborhoods with sufficient density to support public transit.

New city government construction projects will have to meet 2020 environmental building codes. Contractors are being encouraged to build green rooftops and walls, and the city plans to install 60,000 square meters of solar panels on municipal buildings. 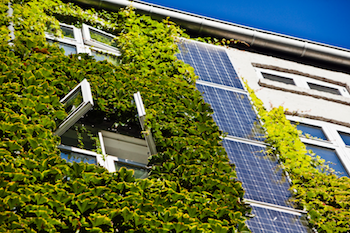 Energy-efficient building in Copenhagen with a green wall and photovoltaic panels.

Copenhagen is also expanding its climate and environmental procurement requirements to focus on vehicles, energy-consuming products, and supplies. For example, since 2011, the city has only bought zero-emission propulsion vehicles for municipal use.

Following the path to carbon neutrality outlined in its 2025 Climate Plan, Copenhagen is gradually reaching its goals of improved energy efficiency, renewable energy production, green mobility, and exemplary use of energy by city government, all while moving closer to being independent of fossil fuels.

As Copenhagen implements the four phases of its climate plan, it is gaining valuable knowledge and insights that may prove crucial when the day comes for Copenhagen to entirely dispense with fossil fuels.