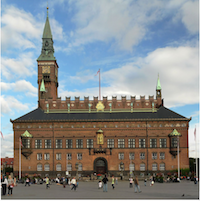 Copenhagen, Denmark—By focusing on reducing carbon emissions and becoming more sustainable, can cities enhance their citizens’ health, well-being, and comfort, while improving their economies? City officials in Copenhagen have no doubts.

The city is rapidly moving toward meeting the goal of its 2025 Climate Plan to become the world’s first carbon-neutral city by 2025, reducing or offsetting all carbon emissions. As it does so, officials are confirming the same policies that protect the climate also improve the capital city’s economy and global competitiveness.

Each time Copenhagen spends $1 on its climate plan, it generates $85 in private investment elsewhere in the city, says Jørgen Abildgaard, Copenhagen’s Executive Climate Director. The city’s economic studies indicate that the climate plan will generate an economic surplus of almost $1 billion over its lifetime.

As part of its 2025 Climate Plan, after Copenhagen’s carbon emissions are reduced by 37 percent, the city will purchase carbon offsets to achieve the remaining 63-percent reduction. Although offsets will, in principle, result in zero net carbon emissions, the local effects of residual carbon emissions will still be felt.

Copenhagen has succeeded in reducing its carbon emissions by more than 40 percent since 1990, even as its population has grown by 50 percent. The city is now home to nearly 600,000 people, with greater Copenhagen comprising 2 million people.

As the city’s population increased between 2005 and 2014, its economy grew by 18 percent; by contrast, its per capita CO2 production fell 31 percent, due to the city’s climate protection efforts, says Abildgaard.

The city’s climate gains are not only holding, but its residents are also producing proportionately less carbon than Danes elsewhere in the country. With 40 percent of Denmark’s population living in greater Copenhagen, the city only emits 30 percent (or 2.5 tons per person) of the nation’s carbon emissions.

Copenhagen is increasing energy efficiency by encouraging residents to use low-carbon transport. Currently, about 45 percent of all trips are made by bicycle, with 75 percent of cyclists riding year-round. The city has a bike-sharing system, dedicated bike lanes, and routes where cyclists traveling at designated speeds can hit all green lights. 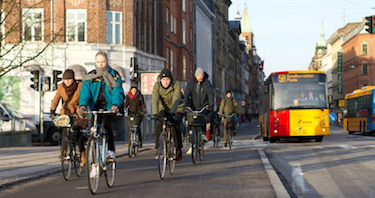 The city government has increased the proportion of its cars running on electricity, biofuels, or hydrogen to 64 percent, with the goal of having all city vehicles converted by 2025, and is implementing carbon-neutral bus service to replace diesel buses.

To reduce the emissions from its district heating system, Copenhagen is producing heat from municipal waste and building a biomass-fueled power plant named BIO4 at Amagerværket to replace a 600-MW coal power plant. Scheduled to open by 2020, the plant is designed to reduce CO2 emissions by 1.2 million tons. 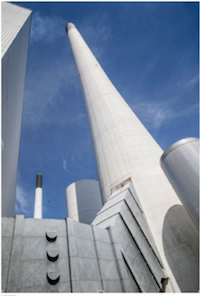 Disputing the idea that reducing emissions is costly, Copenhagen’s Mayor of Technical and Environmental Affairs Morten Kabell asserts, “It hasn’t been expensive for Copenhagen to go green.”

Energy efficiency results in savings to consumers and businesses. The adoption of innovative efficiency technologies brings new products to market or lowers production costs in ways that make the city’s economy more competitive. This is consistent with Kabell’s view that “making environmental sense, makes economic sense.”

Why is there such broad support for the climate plan’s goal of achieving 100-percent carbon neutrality by 2025 when so many other cities are striving for less? According to Kabell, “Going green is good for the economy . . . for creating more jobs . . . for actually having a vibrant city . . . it’s part of making cities more livable, . . . a key component today in a [competitive] economy.”

To a large extent, the impetus for the climate plan was Copenhagen’s hosting of the COP15 global climate conference in 2009, explains Kabell. City leaders believed they had to “walk the walk” and “talk the talk,” setting an example for other cities.

Is the city’s carbon goal feasible? “One thing I keep saying,” Kabell states, “[is] we will do it. There are lots of obstacles. Lots of challenges. Lots of setbacks, especially on the national level, but Copenhagen will be carbon neutral in 10 years’ time!”