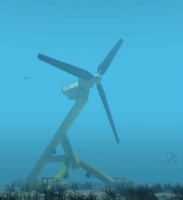 The contract, awarded by Hammerfest Strom UK Ltd, includes the subsea generator and the shore based systems, including a power converter, transformers and switchgear.

The turbine will be deployed at the European Marine Energy Centre (EMEC) in Orkney, off north-east Scotland, during the late summer of 2011.

After an initial test period, Hammerfest Strom will work with Scottish Power Renewables to install a 10-MW array at Islay in 2013.

This project will be situated in deep waters just south of Port Askaig in the Sound of Islay, between the islands of Islay and Jura off Scotland’s west coast.

In other news, Converteam recently announced that it has successfully completed static testing of essential elements of its Hydrogenie hydro generator.

Hydrogenie, thought to be the world’s first high temperature superconducting (HTS) hydro generator for a commercial installation, is being manufactured by Converteam as part of a European Union (EU) part-funded project and will be installed at the Hirschaid run-of-river hydroelectric power plant in Bavaria, Germany, which is owned and operated by E.ON Wasserkraft GmbH.