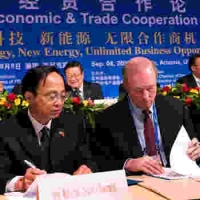 Oklahoma, United States [Power Engineering] Greenhouse gas emissions: the one thing that has been in the headlines for the past few weeks as more companies and states begin to find ways of lowering electricity costs and emissions at the same time.

During the United Nations General Assembly in September, all eyes were on the United States and China, two of the world’s heaviest emitters of greenhouse gases. China is currently planning an 11,950 MW renewable energy park, the Ordos New Energy Industry Demonstration Zone (NEIDZ), which includes a proposed 6,950 MW of wind energy, 3,900 MW of PV, 720 MW of concentrating solar power plants, 310 MW of biomass and 70 MW of hydro storage. This will all help the country to reach its renewable standard of 15 percent by 2020.

China has already created government subsidies for solar panels, photovoltaics and concentrated photovoltaics (CPV) that are luring many North American companies to do business in the country. In March, the government said they would offer $2.94 per watt for PV installations greater than 50 kW, which could cover half or most of smaller-scale solar projects. For much larger projects, that still adds up to big savings when you include the low cost of solar panels, which have dropped 40 percent since the middle of 2008, according to an August article in The New York Times.

Four American utilities announced in 2009 that they would take advantage of the deals and work with China to either build solar projects or share information. First Solar, LDK and Canadian Solar have all signed agreements for PV projects in Ordos City and Jiangsu Province while Duke Energy is sharing solar, zero-emissions coal and smart grid technology with the Huaneng and ENN groups.

Tom Shiel, spokesman with Duke Energy, said the company’s CEO, Jim Rogers, was the one who pushed them to go overseas.

“He’s been amazed at their advances in technologies,” Shiel said. “China is pretty much building entire cities around renewable sources, so they’re able to utilize technologies in a more practical matter.”

After the fifth annual Clinton Global Initiative ended on September 25, Chinese researchers were then going to visit some Duke Energy plants and check out their technologies. Shiel said some Duke Energy staff had already been over to China to look at what technologies they have to offer. It’s all part of the information sharing agreement the two groups signed.

Shiel wouldn’t say what exactly was being passed between the two countries or even if it would lead to a definite solar project. “We’re working to develop technologies together and share information,” he said. “Where that leads, we will see.”

First Solar is another company doing business with China. The company signed a Memorandum of Understanding with Ordos City on September 8 to develop what is considered to be the world’s largest PV power plant at 2,000 MW in the NEIDZ, along with investments in Chinese manufacturers.

Canadian Solar is planning a 500 MW solar power plant in Inner Mongolia and LDK Solar also signed an agreement for up to 500 MW of PV power in Jiangsu Province. LDK has already manufactured solar wafers in China after opening a turnkey solar manufacturing facility by GT Solar Technologies.

“What’s driving it is our economy,” Lawton said. “And what’s important is China’s incredible energy needs.”

Those needs, Lawton said, are pushing the country to make it easier and more affordable to invest in renewable projects.

“The lower hanging fruit is that you’ve got a huge demand in China so it’s natural to look there,” Lawton said. “And the Chinese are only painfully aware of their own problems with pollution in terms of GHG and others.”

But there is still hope for the United States to be able to lure in businesses. “In terms of percentages or potential of energy generated, yes we can catch up,” Lawton said.

Sharryn Harvey is the online editor for Power Engineering.

This article was reprinted with permission from Power Engineering as part of the PennWell Corporation Renewable Energy World Network and may not be reproduced without express written permission from the publisher.