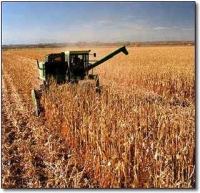 Griggsville, Illinois [RenewableEnergyAccess.com] The $80 million ethanol plant to be built in Illinois by the Western Illinois Ethanol Project will use an advanced processing design, “corn dry fractionation,” which developers say will make its production of the gasoline additive more efficient than conventional plants and create new co-products from corn feedstock.

The plant will separate the parts of the corn kernel before the kernel’s endosperm, which carries the starch that is transformed into ethanol, is introduced into the fermenter. The kernel’s corn germ, which carries high quality vegetable oil, and corn bran will be separated, in the first of the plant’s two main processing operations. In addition to having value in animal feeds, the bran can replace approximately 35 percent of the natural gas that would be required by the process (about 8,500 Btu/lb). Use of the bran as a heat source can replace half of the plant’s natural gas requirements, according to consultants Frazier Barnes & Associates of Memphis. Markets already have developed for corn oil, which can be extracted from the corn germ. The corn germ, also separated before fermentation, contains high quality corn oil, whose properties are lower in trans fatty acids than other processed vegetable oils. The ethanol facility will produce 50 million gallons of the gasoline additive annually, requiring about 20 million bushels of corn, and employing 40 people.