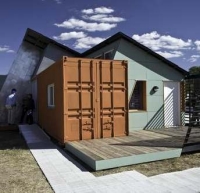 Colorado, United States [RenewableEnergyWorld.com] Colorado is blessed with an abundance of largely untapped renewable resources, a fact that has become more widely and greatly appreciated in light of high fossil fuel prices and a range of socioeconomic and environmental challenges that are only growing in intensity.

There’s a lot of room and opportunity to develop renewable energy resources in the Rocky Mountain State: as of 2006 only 2% of Colorado’s electricity was produced from renewable sources. That’s expected to reach 10% by the end of this year, according to Public Utilities Commissioner Matt Baker.

“We are working with school districts, local non-profits, utilities and local governments as partners in advancing the ‘New Energy Economy,'” Tom Plant, director of the Governor’s Energy Office, said.

“We currently have partnership agreements with over 50 partners in our ‘Insulate Colorado Program’ and 40 school districts to make our schools more efficient. We also work directly with local economic development offices and the state office of economic development to bring new energy industries to Colorado and with NREL [National Renewable Energy Laboratory] and the Collaboratory Universities to commercialize research from our institutions and develop locally grown Colorado companies in the ‘New Energy Economy.'”

Colorado was the first U.S. state to pass a Renewable Portfolio Standard, which requires investor-owned utilities to get 20% of their electricity from renewables and municipal utilities and rural electricity cooperatives to get 10% of their electricity from renewables by 2020. Given the task of mapping Colorado’s renewable energy resources and putting forward a development strategy pursuant to passage of the RPS, a 16-member panel in their report to the Task Force laid out a roadmap for achieving the goals set out in the Governor’s “New Energy Economy” and “Climate Change Action Plan.”

An Abundance of Renewable Resources

Colorado’s ranks 4th nationwide when it comes to solar and geothermal resources and 11th in terms of wind power generation potential. It also has untapped hydroelectric and biomass resources.

Beyond meeting the state’s RPS, the Rocky Mountain State has renewable energy resources sufficient for export to other electricity markets, according to the Task Force report authors.

Colorado is similarly well-resourced when it comes to the “intellectual and institutional resources” necessary to achieve the Governor’s “New Energy Economy” and “Climate Change Action” plans, they note.

“Under the auspices of the Colorado General Assembly, Colorado’s Research Collaboratory has partnered with National Renewable Energy Laboratory, the University of Colorado, Colorado State University, and the Colorado School of Mines. In addition, the state is fortunate to enjoy a vibrant and growing ‘New Energy Economy’ of entrepreneurs and businesses.”

The Governor’s Energy Office, the state’s General Assembly and its Public Utilities Commission — led by three commissioners appointed by Governor Ritter — are working jointly to enact the Governor’s energy strategy by pursuing renewable resource development projects at both the large utility and smaller, local and regional scales.

The Public Utilities Commission in late September was finalizing a set of bids for as much as 850 MW of renewable power projects. “We may end up with anywhere from 200 to 600 MW of solar thermal (concentrating solar power)…There’s a very good resource in the central valley, and we’re getting a lot of interest from developers,” Baker commented.

Aiming for transparency and to disseminate what is essentially public information as widely as possible, the the Governor’s Energy Office provides bi-weekly updates of the RFPs the PUC receives from renewable energy project bidders on its website.  Seven RFPs detailing bids for some 468 MW of renewable electric power, plus another 435,000 MWh RFP from Xcel Energy comprised of solar, biomass, geothermal, hydroelectric and fuel cell projects had been submitted as of September 22.

“Wind is still the primary utility-scale renewable resource, but we also expect to see significant developments in large-scale PV and concentrated solar production,” Plant explained. “We have some exciting biomass projects in the works and companies that are being formed to make biomass use of the casualties from our forest epidemic of beetle kill.”

Even though it is building out additional natural gas-powered electricity capacity, the PUC expects that by 2015 the state will wind up using significantly less natural gas than it’s using today as a result of renewable energy bids on its planning slate, according to Baker, “so when the wind’s blowing the gas isn’t burning.”

Though it doesn’t have any geothermal power projects in development as yet, geothermal is another promising renewable energy resource in the state. “That may be in our future. We also have many direct heat applications from geothermal as might be expected in a state with towns like Idaho Springs, Colorado Springs, Pagosa Springs, Glenwood Springs, Steamboat Springs etc… Geothermal has a long and glorious history in Colorado,” Plant pointed out.

The Colorado Department of Local Affairs during the second annual “New Energy Economy” conference on October 14 will award Energy Impact Assistance Funds’ grants totaling as much as US $10 million to at least five regional efforts “striving to create integrated, vibrant and sustainable communities.” The grant awards are one aspect of Colorado’s “New Energy Communities Initiative,” which “rewards local governments working collaboratively to position their communities at the forefront of the state’s New Energy Economy.”

“As Colorado has seen in the past several years, rural economic development benefits result from renewable energy projects. Local owners can find commercial returns on investment in smaller projects if policy and financial support is available,” according to the report.

Providing incentives to consumers to install renewable energy systems and make energy efficiency and conservation improvements round out Colorado’s “New Energy Economy” plans. “We have rebates together with our local partners to incentivize solar PV, solar thermal and small wind generation,” Plant explained. “We also have a distributed solar carve-out in our Renewable Portfolio Standard.”

The next big issue the state is tackling is lowering the cost of access to these systems, he continued. “We’re aggressively pursuing financing options to lower the cost of entry for homeowners as they look to incorporate renewables in their homes.”

The state’s renewable energy and conservation efforts are also beginning to pay dividends in terms of growing employment and boosting the economy. “We have seen enormous increases in ‘New Energy Economy’ jobs related to the widespread adoption of these distributed systems. Right now, we have over 7.75 MW of distributed solar installed and a target of another 12.50 MW this year for a total of 20.25 MW,” Plant noted.

“We have a study coming out in about a month which will quantify these numbers, but initial indications are that renewable energy and energy efficiency provide nearly five times as many jobs in Colorado as the O&G (oil and gas) industry.

“They are both important industries to Colorado, but I don’t think anyone expected to see the type of growth we’ve had in the ‘New Energy Economy’ sector. This is a testament to the success of Governor Ritter’s vision — identifying tremendous economic opportunity by aggressively pursuing the emerging renewable energy and efficiency industry.”

In Part 2 of this article, we’ll be looking at specific renewable energy companies in Colorado that are working within the state’s new energy economy.

Andrew Burger is a RenewableEnergyWorld.com international correspondent currently based in Colorado.