More
Home Baseload Bioenergy Colorado Could be the Next Solar State 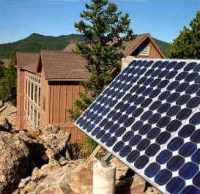 Denver, Colorado [RenewableEnergyAccess.com] The pattern has been clear: vibrant solar industries can be created overnight in states that enact legislation supporting solar energy. Colorado could stand to be the next solar-strong state with a proposal underway for rebates of up to $4.50 per installed watt.

In an effort to comply with the voter-approved Amendment 37 initiative last November in Colorado, which requires investor-owned utilities to use or fund a small percentage of solar energy, Xcel Energy made an interim filing with state regulators that would allow a new program to begin in on Jan. 1, 2006. A program start date of Jan. 1, 2006 would be particularly helpful for Colorado residents interested in going solar since a separate federal tax credit of 30 percent (up to $2000) comes into effect at the same date. This was part of the Federal Energy Policy Act of 2005, otherwise known as the energy bill, which passed last summer. The filing with the Colorado Public Utilities Commission (CPUC) sets forth the amount Xcel Energy would charge all customers per month to fund the state’s mandated Renewable Energy Standard (RES). It also establishes the rebate amount as required by Amendment 37 that will be paid to those who take part in the solar program. The CPUC has until March 31, 2006, to establish rules and regulations for the RES in Colorado, including solar power development. “We need to begin the installation of solar resources as quickly as possible if Xcel Energy is to meet the mandates approved by Colorado voters,” said Fred Stoffel, Xcel Energy vice president for policy development. Xcel Energy would charge customers an additional 1 percent of their monthly electricity bill to support the renewable energy mandates, through a proposed electricity “rider” known as the Renewable Energy Standard Adjustment (RESA). The Colorado General Assembly approved a charge up to this amount earlier this year. Based on projected electricity bills as of Jan. 1, 2006, typical residential customers would pay an estimated 59 cents a month and typical small-business customers would pay an estimated $1.14 a month to support renewable energy activity. Larger business and industrial customers also would pay 1 percent of their total monthly bill. In total, Xcel Energy would collect an estimated $22 million a year through RESA to support the mandates. A second component of the filing addresses in part the total solar payment for customers who install photovoltaic systems. The total solar payment would be $4.50 per watt. In its filing, Xcel Energy first seeks to rebate customers $2 per watt installed on customer premises, up to 10,000 watts (or 10 kW). Also as part of the program, the company would purchase Renewable Energy Credits (RECs) generated by the customer’s system, for $2.50 per watt. These credits then would be counted toward the company’s RES requirements. A common size for residential photovoltaic systems in Colorado is 2-3 kW, and payments to customers at this size would be in the $9,000 to $13,500 range. This would cover approximately half of the installation cost, since typical photovoltaic systems are priced at $8,000 to $10,000 per kW. Under the initial program, customers may install up to a 10-kW system on their premises, for a recovery of up to $45,000. For installations larger than 10 kW, a future program is planned to provide for a competitive solicitation, or bidding process. California rebates for solar have ensured the continued growth and success of the industry in that state. Currently, almost 80 percent of solar market is located in the sunny state, but other state policies have sparked new growth in other areas of the country. New Jersey, for example, now offers solar rebates and these policies have made that state the strongest market for solar in the east. These new rebates in Colorado could do the same.