With the world community convening in Copenhagen on December 7, global climate change is finally taking its rightful place in the headlines.

Plan B 4.0; Mobilizing to Save Civilization, by veteran environmental champion Lester R. Brown, President and Founder of the Earth Policy Institute, is an excellent primer on the subject that vividly describes the situation as “a civilization in trouble” and unequivocally lays out the 4 crucial goals that must be achieved if climate change is to be turned back: (1) Stabilize population, (2) eradicate poverty, (3) restore the earth’s natural sustaining ecology and (4) stabilize the climate. The overall goal is a worldwide cut in greenhouse gas emissions of 80% by 2020.

Does Plan B sound too ambitious? Before answering, it is worth noting that Brown is on record as not caring how it sounds but only whether Plan B will impede the increase in the world average temperature and turn away the worst impacts of global climate change.

His plan will clearly require nothing less than an all-hands-on-deck approach but, as Brown is well known for observing, “Saving civilization is not a spectator sport.” ::continue:: 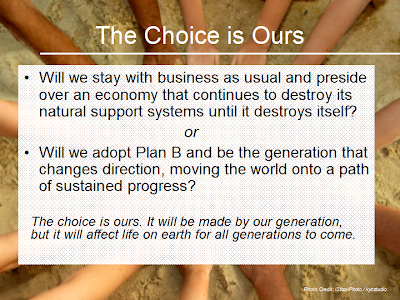 The book concludes an all-out commitment to transition to a New Energy economy will cost $77 billion to achieve the basic social goals and $110 billion to restore the earth. That $187 billion is an eighth of the world’s military budget. It is less than a quarter of the U.S. stimulus package and less than a third of China’s stimulus budget.

In that context, it is also worth noting that conservative estimates put the cost of doing nothing and waiting to deal with the worst impacts of climate change at about 5% of the world’s GDP which, in 2009, would be over $2.5 trillion. 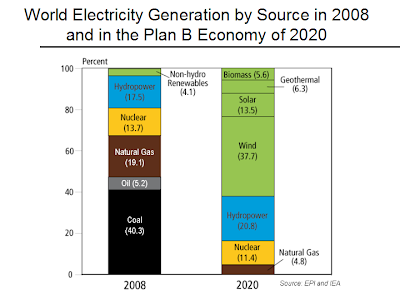 This post is based on Plan B 4.0: Mobilizing to Save Civilization; Could Food Shortages Bring Down Civilization?, November 2009, Earth Policy Institute