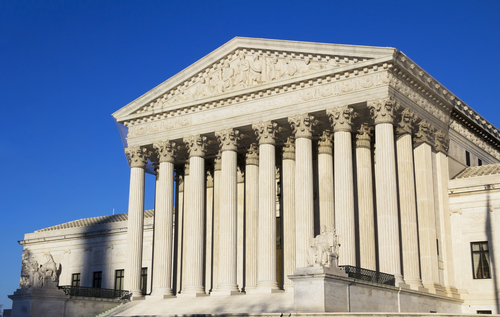 The U.S. Supreme Court blocked a new federal regulation that would cut emissions from power plants, putting a hold on President Barack Obama’s most ambitious effort to combat climate change.

The justices heeded calls from utilities, coal miners and more than two dozen states to halt the Environmental Protection Agency rule while court challenges go forward. Foes say the agency is overstepping its authority and intruding on states’ rights.

Supreme Court intervention casts doubt on the legal prospects for the program, suggesting doubts among a majority of the nine justices.

The delay lasts at least until a federal appeals court in Washington rules on the plan, probably later this year after it hears arguments in June. If the utilities and states lose in that court, the delay would continue while they sought Supreme Court review. The EPA won’t able to enforce a Sept. 6 deadline for states to either submit their emission reduction plans or request a two-year extension.

“We are thrilled that the Supreme Court realized the rule’s immediate impact and froze its implementation, protecting workers and saving countless dollars as our fight against its legality continues,” Morrisey said in a statement.

The EPA rule, known as the Clean Power Plan, requires states and utilities to use less coal and more wind power, solar power or natural gas. The program is designed to bring about cuts in carbon emissions from power plants of 32 percent by 2030.

It’s “the most far-reaching and burdensome rule EPA has ever forced onto the states,” 26 states led by West Virginia and Texas argued in court papers.

A three-judge appellate panel rejected a bid for a delay on Jan. 21, prompting foes to turn to the Supreme Court.

The Obama administration said power plants wouldn’t face any deadlines to begin cutting emissions until 2022 at the earliest, and wouldn’t have to be in full compliance until 2030. Administration lawyers accused states and businesses of seeking an “extraordinary and unprecedented” delay of the entire regulation before any judge had ruled on it.

“A stay that delays all of the rule’s deadlines would postpone reductions in greenhouse gas emissions and thus contribute to the problem of global climate change even if the rule is ultimately sustained,” U.S. Solicitor General Donald Verrilli argued.

The challengers, whose ranks include Southern Co., Peabody Energy Corp., the largest U.S. coal-miner, and the U.S. Chamber of Commerce, said companies and states alike already were having to prepare for the rule to take effect.

Southern and other utilities told the justices that, without Supreme Court intervention, companies would have to “begin the complex and lengthy process of shutting down or curtailing generation from existing plants and shifting that generation to new sources.”

The appeals court is hearing challenges to the rule on an expedited basis, with arguments set for June 2. If that court rules quickly enough, the Supreme Court could consider the case in the nine-month term that starts in October.